Koan on tour: sculpture sets out on i-koan-ic journey

Amongst the various things the University of Warwick is known for, perhaps none is as iconic (or i-koan-ic, if you will) as the Koan. A few weeks ago, on July 24, the Koan was sent off on a tour of campus in light of Warwick Arts Centre’s redevelopment plans.

The revolving sculpture, made by Liliane Lijn, was first installed nearly fifty years ago, in 1972. Since then, the Koan has become synonymous with the Warwick campus. Apart from being a popular site for graduation photos, it has also been the inspiration for a variety of rumours and stories. Over time, there have been attempts to integrate the Koan even further into the university’s image, including the formation of a Koan Society, the creation of a strip cartoon by Steve Shipway, and a petition to include it in the university logo. The Koan is now also a mascot for the University of Warwick University Challenge team.

Over time, there have been attempts to integrate the Koan even further into the university’s image, including the formation of a Koan Society

The six metre structure is the first of its kind, made with industrial materials with an artistic twist. Liliane Lijn is known for exploring light and movement through her sculptures, as well as for combining art with science, philosophy and mythology. The Koan in particular, although often the subject of much speculation, is meant to foster calm and thoughtfulness. Its name is not only a pun on its cone shape, but also on the Buddhist concept of a ‘koan’, or, a question without an answer — something many university students may be familiar with.

As part of the 20:20 Project, which aims to refurbish the Arts Centre in the next three years, the Koan has been moved to a different home for the time being. Sarah Shalgosky, curator of the University of Warwick, has said that the 20:20 Project will entail moving some important pieces of art. Due to the Koan’s eminence, the Koan Tour has been developed to prevent it from going into storage.

The Koan in particular, although often the subject of much speculation, is meant to foster calm and thoughtfulness

In this way, the Koan can continue to represent the university from different locations on campus. A part of its relocation process involved separating the sculpture into two parts, and it now resides (back whole again) at Gibbet Hill, outside the School of Life Sciences. Meanwhile, the vacated spot outside the Arts Centre will be occupied by a temporary theatre called The Goose Nest.

According to Shalgosky, the Koan will stay at its current location for a year. It will be making further stops across campus in the next three years before returning home in 2020.

The importance of Warwick Arts Centre to life at Warwick 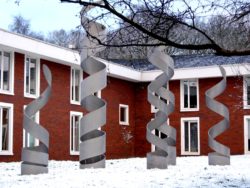 Our guided tour of campus art