Little over a month ago, Harry Styles sung his way back into our lives with his first solo track ‘Sign of the Times’. Since then, it’s been non-stop for the former One Direction frontliner; endless media appearances, a world tour announcement and of course, the release of his debut album. Harry Styles’ Harry Styles melds together the vibrant energy seen in his 1D days with a tribute to his rock’n’roll influences. Always an enigmatic figure despite his residency in the gossip pages, Styles’ foray into a more mature sound fortifies his seeming allusiveness, with songs to make fans (and press) analyse every inch of the record to find some clue as to who the star is singing about. The debut single saw a strong start to the 23-year-old’s much anticipated solo career but questions arose as to whether his album could match expectations. Trying my best to not let my undying love for Harry cloud my judgements, here is my breakdown of the ten-track record:

Meet Me in the Hallway:
The opening track adopts a Bon Iver-esque tone, with Styles’ signature rasp layered under feathery, melancholic vocals to execute a start to the album that is perhaps gloomier than one would anticipate. The chorus appears to be reminiscent of that in ‘Sign of the Times’, offering a similar melodic formula. It’s a wonderful showcase of Styles’ voice and immediately sets the tone of the album: themes of longing and heartbreak prominent throughout the whole record.

In my original review of this I rated it four stars out of five. Whilst I do still enjoy it and appreciate its mesmerising, twanging guitars that evoke a psychedelic rock comparison, I don’t think I would rate it as high after hearing the full album. It’s beautiful,  however I feel that it’s more of an album closer rather than a first single.

The album’s third track, ‘Carolina’, sees Styles’ pick up the pace. With a bluesy opening, this guitar-driven song is simple but fun. The verses are rife with the smooth, croon of Styles’ voice before he embraces the rock-star edginess that he’s trying to establish in the chorus. Littered with backing vocals of ‘Oh Yeah’s and ‘La la la’s, this one is sure to be a crowd favourite during his forthcoming tour.

Returning to the melancholy of the opening track, Styles proves that, despite dating in 2012, the talk about ‘Haylor’ is not over yet. Said to be the song about his relationship with Taylor Swift, ‘Two Ghosts’ is reflective and woeful with the lyrics evoking a sense of emptiness, longing and regret. To be completely honest, it’s one of the most forgettable songs on the album, acting as a filler on the already short record. I can only assume that this made the final cut due to the inevitable media storm it would create, the relationship presumably being about one of his most publicised.

This track follows the thematic trend of difficulties in a relationship; it’s instrumentally very simple, placing the focus on Style’s vocals and some soothing backings. The song sounds like a lullaby with its gentle melody and there’s a certain vulnerability to it. For lack of a better word, it’s just nice. Listening to it feels like getting a hug or lying in the sun- Styles lulls you with his warm voice, creating a nice midpoint in the album.

‘Only Angel’ opens with the heavenly sounds of a choir which follows on from the soothing, ethereal tone of the previous track. A minute in however, upbeat riffs burst in, injecting much needed life into the album. Whilst the first half of the record is full of isolated vocals, the lonely, heartbroken boy narrative was quickly becoming repetitive. The sixth track fully embraces the 70s-rock influence that Styles repeatedly grants as inspiration. Imbued with the vivacity of a Rolling Stones track, the song’s vocal yells and liberated shouts don’t make it hard to imagine Harry doing his best Jagger impression when the time comes to perform this live.

If you were hoping for a lyrical explanation for the title of this track then you will be disappointed. ‘Kiwi’ shakes you awake with immediate vocals and heavy guitar. The lyrics are provocative (“She’s all over me/it’s like I paid for it”) and amped up, emulating the energetic debauchery of rock star life in the 70s. The song sounds like a bit of fun during a jam session, and perhaps it was; Styles himself stated that the track was originally written as a joke. He also said that it’s one of his favourite songs on the album and it’s probably one of mine too.

Ever Since New York:

The eighth track on the album makes a return to the melancholic first half, once again offering vague references that allude to his relationship with Swift. The slow-folk style nods towards Fleetwood Mac whilst exhibiting another musical turn during the record and the lyrics evoke a strong sense of loneliness and longing.

Once I got over the weird, duck-like vocal effects that accompany the RnB influenced beats of the track, I quickly decided that this is one of my favourite songs from the album. The track is smooth and sophisticated; a slow jam that holds an air of bleakness as Styles longs for a love he can’t have.

From the Dining Table:

The closing track once again lets Styles’ voice do the talking; with vocals that feel likes he’s whispering in your ear accompanied by a soft guitar, the tone is undoubtedly woeful. Sadness and (without wishing to sound like a broken record) longing are fully evident in his voice, ending the album on a dejected note. The track that is most rife with heartbreak leaves you wondering who had the audacity to hurt him like that.

With his name attached to every song on the record, Styles confidently affirms his talents with his first solo album. Whilst a bit of a mixed bag of energy, the record just about holds together a cohesive sound, conspicuously showcasing the singer’s musical tastes and inspirations. He embraces the Jagger comparisons that have tailed him since his X Factor days in his upbeat tracks, which works in his favour as one can consider them the best songs on the record. Whilst I enjoy the album, I can’t help but bear in mind the certain cliché and vapid subject matter of his songs. Much like in his One Direction days, the tracks boast flings with irresistible girls who are out of his league, girls who are angelic on the surface but seductively bad underneath and girls he lost causing him to be the ultimate Sad Boy- it’s as if there’s a pop-version of the Manic Pixie Dream Girl and Styles has fallen victim to infatuation. The lyricism has undeniably improved with age and experience; however, it still lacks a substance that I hope he gains in the next record. That all being said, I will still let my naïve love of the heartthrob prevail just enough to continue listening to the album at least fifty times a day. 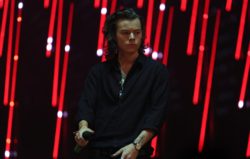