Concerns have been raised that the legitimacy of the government’s Teaching Excellence Framework (TEF) may be damaged by the continued campaign to boycott the National Student Survey (NSS).

Warwick Students’ Union (SU) is among 25 SUs nationwide who have so far opted to support the National Union of Students’ (NUS) boycott of the NSS.

Responses from the NSS form a vital part of the TEF, used to help calculate the score that universities receive in relation to standards of teaching. If the response rate for the NSS at a university falls below 50% then the results are considered invalid and not included.

Ipsos Mori, who operate the NSS, maintain that it is intended to provide a broader picture of higher education in the UK as well as offering institutions an opportunity to receive and respond to feedback.

Concerns surrounding TEF are that factors measured, such as dropout rates, do not truly reflect teaching quality and also that the ranking of institutions as gold, silver, and bronze standard will be used to facilitate an increase in tuition fees.

Whilst all universities are permitted to raise their fees to £9,250 for the start of the 2017/18 academic year, those who sign up to the TEF will be permitted another inflation-linked increase next year.

Institutions that achieve gold or silver will also be able to raise fees with inflation from 2019 onwards, whilst those achieving bronze will only be able to increase their fees at half the rate of inflation.

Warwick’s SU, which began officially campaigning for the boycott following a referendum last November, is joined by the SUs of a number of other Russell Group universities including Oxford, Cambridge, Manchester, Bristol, UCL and Liverpool.

This is a campaign which is not only gaining support from Warwick students, but from thousands of other students across the country too, and that is the integral aspect of it

However, despite the official backing of the NUS, not all SUs are campaigning for the boycott, with students at York University voting earlier this week against such action by a majority of 568 votes to 379.

Addressing the national support that the boycott has been receiving, Hope Worsdale, the SU’s Education Officer, commented: “[The results] add more weight to the notion that this national NSS boycott campaign has the power to disrupt the government’s damaging higher education reforms.

“This is a campaign which is not only gaining support from Warwick students, but from thousands of other students across the country too, and that is the integral aspect of it – if the campaign is done collectively and on a national scale, it massively strengthens the impact and prevents individual institutions from being singled out.

“We know that under current projections for the TEF, teaching at Warwick will be seriously undervalued by the flawed metrics. We must continue to push instead for a system where teaching is valued properly.”

Warwick SU is encouraging students participating in the boycott to opt out of communications from Ipsos MORI and join the boycott officially.

Whilst the University’s official position remains that students should complete the NSS, Vice Chancellor Stuart Croft criticised the TEF last month, stating: “We feel that we have been backed into a corner.”

This is not the first time the SU has campaigned to boycott the NSS, having successfully participated in a boycott of the first survey in 2005, along with eight other institutions including Oxford, Cambridge and City University of London. 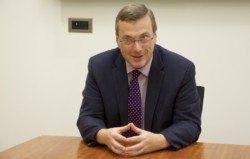 Warwick’s Vice-Chancellor speaks out against TEF