The plight of LGBT Muslims in the UK

For many LGBT-affirming Muslims in the UK, their sexuality is not only a taboo, but also a cause of constant fear. Victims of both Islamophobia and homophobia, they are some of the most vulnerable members of our society. It is a reality that often goes unacknowledged, with the tensions between the Muslim and LGBT communities rarely being confronted. This is what The Peter Tatchell Foundation is fighting against. The Foundation promotes and protects human rights and is currently leading the LGBT-Muslim solidarity initiative, the aim of which is clear: “to encourage dialogue, unity and solidarity between the Muslim & LGBT communities – to oppose all hate.”

We spoke to the director of the Foundation, Peter Tatchell, who explained that the solidarity initiative arose directly from the requests of the LGBT Muslim community who have themselves been subjected to various forms of abuse:

“It has been prompted by requests from LGBT Muslims who have suffered abuse and harassment, often from fellow Muslims. They’ve asked us to challenge homophobic prejudice.”

The initiative seeks to achieve this through a variety of tactics, including leafleting in Muslim areas, seeking dialogue with mosques and Muslim organisations, organising debates, and setting up stalls at Muslim events. When asked how we as individuals, and in the UK as a whole, can show support, Peter emphasised that understanding the situation first of all is imperative.

“It is important to recognise that LGBT Muslims are some of the most victimised people in Britain today. While not all Muslims are homophobic, a disproportionate number LGBT Muslims are pushed out of their homes by their families, ostracised by their communities and banned from worshipping at their mosque.”

Unfortunately, the consequences of being an LGBT-affirming Muslim in the UK can be extremely serious. Members of the Muslim LGBT community in the UK may face everything from verbal abuse to physical assault, and sometimes even honour killings. The interview took a sombre tone when Peter highlighted the reality of the situation by drawing on the case of one particular victim.

A gay Muslim man from the Midlands […] was lured back to Pakistan on the pretext of a family reunion. When he got there he was hacked to death for being gay

“We had reported to us a case of a gay Muslim man from the Midlands who was lured back to Pakistan on the pretext of a family reunion. When he got there he was hacked to death for being gay.”

There are Muslims within the UK, Peter claims, who do support the execution of members of the LGBT community. Honour killings are rare but they do occasionally happen. However, smaller scale violence is more common and just as alarming.

“When we were leafleting in Whitechapel, a young Muslim guy approached us to say that he’d been forced out of his flat by anti-gay Muslim neighbours. He suffered months of abuse and violent threats because of his sexuality.”

Most often, religion is alleged as the motivation behind such behaviour. According to Peter, however, abuse of this kind is at odds with the teaching of the Quran, which does not explicitly condemn same-sex relations nor prescribe any punishments for it. He referred to the criticism of it as “quite mild” in comparison to the Torah or the Bible, and went on to explain that:

“The punishments are in the Hadiths, which are man-made and reflect the cultural mores and ignorance of the era in which they were written. They are not based on a scientific understanding of human sexuality. The Hadiths are not the word of god. The Quran states that it is the complete word of Allah and requires no further addition, interpretation or clarification. If it’s not in the Quran it is not genuine Islam. Therefore Muslims who denounce LGBT people and call for us to be put to death are misrepresenting the Quran.”

Besides seeking to encourage solidarity and dialogue between the Muslim and LGBT communities, the Peter Tatchell Foundation also aims “to oppose the intolerance, discrimination and hate crime that both communities experience.” Unfortunately, this can prove difficult as fear gets in the way of progress. Many LGBT Muslims are worried about openly discussing their sexuality or even disclosing it. Given the potential repercussions, this fear is not unfounded.

“Many of them fear violent repercussions if they come out as gay or if they speak out against Muslim homophobia. There are a few brave Muslim LGBTs who join our leafleting and lobbying, however they are a tiny minority. Some years back we had a small number of Muslim clerics and community organisers who spoke up for LGBT rights. Regrettably, they were threatened by other Muslims and had to withdraw from our initiatives.”

However, our society depends on the bravery of those who do. The Peter Tatchell Foundation believes in the potential for bridges to be built between these communities through solidarity, dialogue and unity.

Peter Tatchell will be speaking at the University on the 28th February. His talk will take place at 7 PM in room OC0.03 (Oculus). 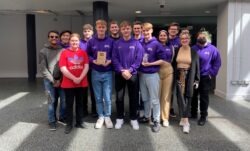 A step forward or missing the mark: will non-binary passports help the queer community?