From the opening crawl, or lack thereof, it’s clear that Rogue One: A Star Wars Story wants to set itself apart as something quite different. A black sheep, a ‘rogue’ if you will, in the Star Wars pantheon. Striking a superb balance between its darker themes and the charm of the originals, Rogue One is a welcome addition to the flock, with only the occasional stumble.

The film follows Jyn Erso (Felicity Jones), a disillusioned criminal whose father (Mads Mikkelsen) was taken away years ago by an agent of the tyrannical Galactic Empire, Orson Krennic (Ben Mendelsohn) and forced to work on a new superweapon, the Death Star. Finding herself in league with the Rebel Alliance, Jyn becomes part of a group of renegades hell-bent on stealing the plans to this weapon, fighting against immeasurable odds to do so. 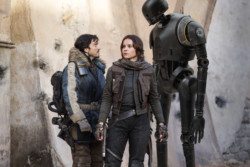 The shambolic group of rebels we have for our heroes are an undeniable strength of the film, with each one bringing their own vantage point on the damage the Empire is doing to the galaxy. Chirrut Îmwe (Donnie Yen) is a personal standout for his unique approach to the force, however there are the hints of a relationship between him and his mercenary friend, Baze Malbus (Jiang Wen) which I would have liked to see explored. Bodhi Rook (Riz Ahmed), an Imperial defector, gives an inside view of the Empire and the reprogrammed Imperial droid, K-2S0 (Alan Tudyk) is sublime comic relief, having had his smarm settings turned up dangerously high after his rewrite. We also have Cassian Andor (Diego Luna), a Rebel Officer who shows a few more shades of grey than we may be used to from an agent of the Alliance, who in this film aren’t always the teacher’s pets of the galaxy we know them to be.

Rounding off the group is Jyn herself, who whilst being something of a standard reluctant hero, carries the role with enough charisma that it never matters. The group dynamic is air tight, serving as the emotional core of our journey into the hell of (star) war. The group could however, have used a couple more female characters, as aside from our lead there are a few too many lightsabres flapping around.

[Director Krennic is] subtly played, with glimmers of a deeper obsession with the Death Star occasionally bursting through, but never quite coming to fruition

As for our antagonist, although Star Wars has among its repertoire some of cinema’s most iconic villains, I don’t see Director Krennic joining that roster anytime soon. He’s subtly played, with glimmers of a deeper obsession with the Death Star occasionally bursting through, but never quite coming to fruition. He lacks a certain passion and tenacity to really make him stand out, and ultimately his actions end up having very little effect on the overall story. This may be the product of being forced to stand on his own against returning titans such as Darth Vader (voiced by James Earl Jones), whose fleeting appearances actually manage to add some new aspects to the character, and reinforce why the galaxy fears him so completely. The inclusion of another returning villain ties to a digital technique used throughout which would spoil a great deal if I revealed it to you, but suffice to say that whilst impressive, it does sometimes send us careening down the uncanny valley.

The story these characters are weaved into is rather straightforward and, whilst there could have been some interesting turns the narrative didn’t take, ultimately it works just as it is. It’s a simple tale told beautifully, which is tied intrinsically to the sincerity of its characters (even with Krennic’s shortcomings), who through their immense likeability make us truly care about the stakes at hand.

it is a testament to Gareth Edwards and the entire creative teams’ strengths that the film was so fearless in its rendition of war.

These stakes, rest assured, really are high, and it is a testament to Gareth Edwards and the entire creative teams’ strengths that the film was so fearless in its rendition of war. People die in this film, to an extent that surprised even a Tarantino-loving psychopath like me, and the level of creative integrity on show is something to be truly admired. Most of this death and destruction comes through in an exhilarating final battle, with the conflicts both in space and on the ground being perhaps the best the series has ever seen, a statement I don’t make lightly. Edwards’ approach to scale is a driving force behind this, making the rebels seem so insignificant compared to the imposing might of the Death Star. 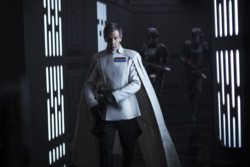 This confrontation and the film as a whole is filled with call-backs and references to the original trilogy to get your nostalgia glands oozing, and whilst some were a tad unnecessary, it’s often hard to resist their charms. Certainly when compared to similar accusations in The Force Awakens, it’s a marked improvement. Rather than re-treading similar story beats, Edwards wisely uses thematic references instead, with the classic feel of the series being captured almost flawlessly.

It seems that this film will now serve as a delightful compliment to the original trilogy, to the extent that if a newcomer were to discover the series, they could quite happily watch Rogue One first and view A New Hope as its sequel. It is in essence a faithful rendition of the series, a relatively simple story told through a wildly loveable cast of characters, and a true force to be reckoned with.