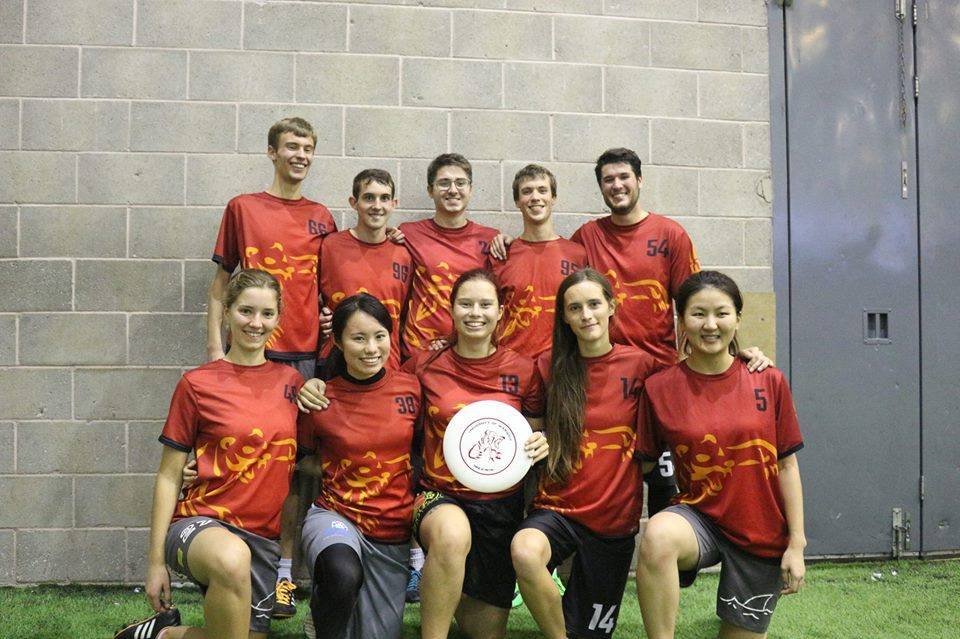 Warwick’s first team won Division 2 last year, meaning that there was one more place on offer for Division 1 qualification, up from two to three spaces. The 1s had a relatively uneventful weekend, winning all their games on Saturday with ease, making good use of their well-drilled handler movement and tight zone defence. On Sunday they narrowly missed out on the top spot after a close match against national champions Birmingham 1s; although Warwick started strong, Birmingham managed to get a break and hold their lead. They traded scores up to 6-6, but Birmingham eventually triumphed 7-6.

However, the real stars of the weekend were Warwick 2s. After topping their pool on Saturday, which included beating Bangor 1s, who came second in the region and ninth in the country last year, Warwick 2s were seeded second on the Sunday – one spot above Warwick 1s! This meant that the second versus third play-off on Sunday matched both Warwick teams against each other. There was much speculation about who might come out on top, since both teams had very strong players. The 1s were better equipped to use zone and offensive set pieces, which the 2s had less time to practise as a team and therefore utilised a more traditional set-up.

After a nail-biting point in which both teams attempted multiple deep passes which failed to connect, the impossible happened.

The 1s were also slightly quicker to pick up after turnovers, which, combined with their unique tactic of ‘throw it to our 6’5” player’, meant that the 2s were defeated in a hard-fought game. Both teams made some amazing plays and much credit goes to the 2s for their hard man defence and fluid handler movement. It was a well-spirited game and both sides were pretty happy with the result.

After a defeat to Cardiff, Warwick 2s came up against their Birmingham counterparts with a place at Nationals at stake. Birmingham 2s started off strong, scoring five consecutive goals in under ten minutes. Eventually Warwick pulled themselves together and scored twice, bringing it back to 6-2 with eight minutes left. Now working really hard on defence, Warwick began to pressure Birmingham’s offence, who started to make mistakes and throw away. Warwick capitalised on every single error the opposition made, and after a nail-biting point in which both teams attempted multiple deep passes which failed to connect, the impossible happened.

Not only did Warwick score five goals in a row, but one of those was a Birmingham own goal, when a handler, panicking under pressure, tried to throw a reset after catching the first pass in the back of the endzone. It was intercepted by the club captain who went on to score (a ‘Callahan’, in Frisbee terms). This amazing result meant that the 2s, after another loss to Cardiff, placed fourth out of nineteen overall, just two places below the 1s. This makes Warwick 2s the first ever second team to qualify for Nationals in our region and Warwick University one of only two universities in the country to have two teams qualify for Nationals.

The icing on the cake came when the 1s and 2s placed first and third in ‘Spirit’. There are no referees in Frisbee; instead teams rank each other out of 20 for knowledge of the rules, fouls, communication, self-control and positivity, and fair mindedness. Division 1 and Division 2 Mixed Indoor Nationals take place in Wolverhampton on the last weekend of November, after both Men’s and Women’s Indoor Regionals.