The RSC has partnered with technology giant Intel for its latest production of Shakespeare’s The Tempest.

The theatre company’s tagline for this adaptation calls it a “ground-breaking” new production, and it most certainly is. Set on a magical island, inhabited by Prospero, his daughter Miranda, the ‘other’ figure of Caliban and the spirit Ariel, the play depicts Prospero seeking revenge on the people who disinherited him from his kingdom. He creates a storm to shipwreck them, and confused disorder ensues.

The real attraction of this performance is the uniqueness of its staging and technology. Director Gregory Doran said he intended to create something special for the year of Shakespeare’s 400th anniversary. A fantastic visual experience, the technology is primarily used to create the ephemeral Ariel, but does not detract from the performances of the other actors.

The real attraction of this performance is the uniqueness of its staging and technology.

These techniques are usually used in Hollywood films for CGI purposes, and are properly inserted after the initial filming and during the editing process. For the RSC to use this technique live on stage, several nights a week, is challenging but effective. One way in which it manifests itself is Mark Quartley’s Ariel, who wears a motion-capture suit and is visible on stage, providing movements that are then projected onto mesh screens that hang above the stage at various intervals.

While this version of the play certainly has sinister overtones, it is not without comedy. The darkness is punctuated with humour and moments of sharp comic timing by Simon Russell Beale’s Prospero and Tony Jayawardena’s Stephano. Simon Trinder also provides brilliant light relief through his foolish, jester-type characterisation of Trinculo.

Intel’s technology is also used on the stage floor to create certain effects such as flame and forestry; the mesh screens and technology are effectively utilised to change the backdrop of entire scenes to match the setting. But, whether this type of technology usage on stage will become the norm is debatable. With the setting of a magical island and the shape-shifting character of Ariel, The Tempest lends itself particularly well to a form of technology that might seem forced in other plays; it certainly won’t fit the remit of all productions.

Shakespeare in his time would have worked with the best possible staging techniques available, so to stage it this way in 2016 does the play a great justice.

This type of production will not be to everyone’s taste and will no doubt have its critics. One need only bear in mind the recent announcement from the Globe Theatre of Emma Rice’s departure as artistic director, whose use of sound and lighting technology was deemed “too modern”. The digital effects are only really used when there’s a scene including magic, allowing it to be incorporated more organically. Some might well find the frequent lowering and raising of the mesh screens interfering and awkward at times; as Prospero says, the goddesses melt into “air, thin air”, but the screens do not. Yet, the RSC must be applauded for what they have attempted to achieve in this production: the sheer scale of its undertaking makes it worthy of merit and praise.

Undoubtedly, we must also realise that for his time Shakespeare himself was a writer who pushed the boundaries, and that theatre companies in the seventeenth century were leading the way for modern staging, so to criticise such efforts as the RSC’s with Intel today is perhaps not a progressive mindset. Shakespeare would have worked with the best possible staging techniques available, so to stage it this way in 2016, I think, does the play a great justice. 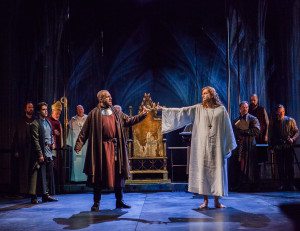