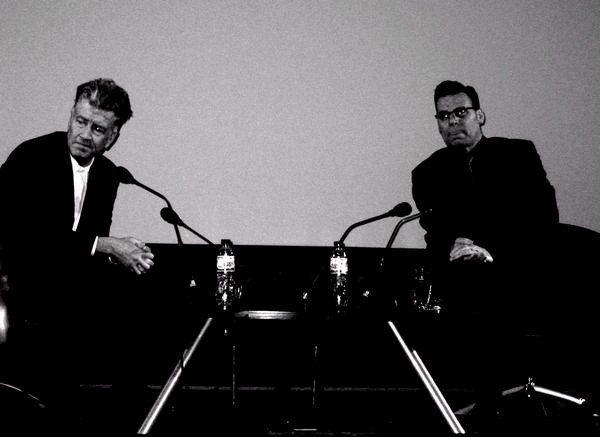 Mark Kermode Live in 3D: “A simple celebration of film”

Far from a simple film screening punctuated by occasional remarks and reflections (I admit, this is what I feared), Mark Kermode’s aptly titled live show, Mark Kermode: LIVE in 3D, delivers something far more dynamic and enjoyable: eloquently spoken insights, thoughts, witticisms, and reactions to the audience, from a man with a clear passion and depth of knowledge in film. And, as if this isn’t enough, Theremins.

Through this jovial interplay, he soon establishes a palpably convivial atmosphere which will set the tone for the rest of the evening.

Kermode received a wave of enthusiastic applause and cheers upon his initial entrance on to the stage: he had a majority partisan audience, but its partisanship would be pleasantly justified throughout the course of the evening. He initiates proceedings with prepared answers to questions posed to him by members of the audience prior to the show via twitter. This sets the precedent for the evening: Kermode does not simply talk at his audience, he manages with great ease and spontaneity to involve them in the show itself. His own questions aren’t rhetorical; he really asks us. ‘we all liked Under the Skin, right?’ meets an almost unanimous affirmation if not for the solitary but distinctly audible ‘no’. Kermode can’t resist finding out why. Through this jovial interplay, he soon establishes a palpably convivial atmosphere which will set the tone for the rest of the evening.

Fans and followers of Kermode’s BBC Radio 2 reviews, TV appearances, and ‘Kermode Uncut’ Video blog, will be relieved to hear that his presentation on stage does not fail to meet expectation.

Transitioning from questions, to short clips, to an on-stage conversation with DenofGeek.com’s Simon Brew, to his perverse admiration for Richard Gere and Zac Braff’s on-screen hair performances; one cannot help but relax and enjoy the magic of Kermode’s film-brain as he segues with discrete suppleness between sections of the show.

Fans and followers of Kermode’s BBC Radio 2 reviews, TV appearances, and ‘Kermode Uncut’ Video blog, will be relieved to hear that his presentation on stage does not fail to meet expectation. Short of an inflamed rant about, say, Sex and the City 2, he is as entertaining, articulate and insightful in the flesh as he is on a recording.

Kermode himself engage another audience member in duelling Theremins, did not fail to produce a parade of dazzled laughter from the audience.

Of particular note in this varied but satisfyingly stimulating tour through the Kermode film-brain are the not one, but two occasions on which Kermode invites a member of the audience onto the stage to try their respective hands at playing a Theremin: a peculiar instrument that uses electro-magnetism to be played solely by the waving of one’s hands (or a weird box with an antenna on, to the uninitiated). Both of its demonstrations (separated by ample time; Kermode adeptly gauges his audiences Theremin limits), one of which sees Kermode himself engage another audience member in duelling Theremins, did not fail to produce a parade of dazzled laughter from the audience.

Kermode ends the show with an all too brief Q&A in which we are treated to some genuinely sincere and thoughtful answers regarding his views on what constitutes good film criticism and his own reflections on his career as a film reviewer.

His natural rapport with and inclusion of the audience, along with his own undeniable enthusiasm, allow Kermode to encourage a mood amongst the audience in which you feel that you are really taking part in a simple celebration of film. Your level of access to Kermode’s references throughout the show may vary depending on the extent of your own knowledge of films but your level of engagement will be consistently high, whether you are a cinephile, a casual fan of films, or possibly even if you have been dragged along by an overly-enthusiastic friend.

If you know Kermode, I would recommend giving Mark Kermode: LIVE in 3D a try. If you don’t know him, by all means get to know him, then give it a try.

Mark Kermode Live in 3D plays is held at BFI Southbank every month.