I am a second year English and Italian Literature student, meaning spending a year in Italy is compulsory for me to progress onto third year. Whilst living in Italy has always been a dream of mine, there have been moments where I’ve been sat at my desk, head in my hands, frantically searching for a flight back to London Stansted. It was only after a two-hour conversation with a friend that I decided to stay and see the year through.

If there is one thing that every student experiences whilst on their year abroad, it’s the culture shock. It may be more profound for some, but every exchange student will experience it in some way or another. I’m going to explain to you the very surreal, delayed and quite frankly unexpected culture shock I experienced earlier this week.

If there is one thing that every student experiences whilst on their year abroad, it’s the culture shock

Before I continue, I’ll briefly explain why the culture shock I experienced was so unexpected. My family originate from the south of Italy. Although I grew up in the UK, my family made sure I was surrounded by the Italian culture. But, fundamentally, Italian is my second language. Whilst my listening and understanding of the language is strong, my speaking, reading and grammar are poor and therefore I decided to study the language as part of my degree.

For me, it wasn’t a gradual process, something that slowly creeps up on you after a long period of time. But rather, I can tell you the exact date and time it hit me. Monday 26th September 2016. The lecturer for my English Literature module – which is taught in Italian – walked in and immediately began to talk about exams, coursework and lecture times. And I didn’t understand a single word that came out of their mouth. Now my understanding of Italian is pretty good even though it’s my second language, so I’m not going to pretend I wasn’t horrified when I didn’t understand a word. In the two-hours that followed I began to realise that I just didn’t belong. The painfully inefficient admin system, the way time doesn’t exist in this country, the way everything is done three hours later than back home, everything I’d been warned about and even experienced first-hand on previous trips to the country. It just wasn’t me.

In the two-hours that followed I began to realise that I just didn’t belong.

But, a week later and even I’m impressed with my improvement. I am now able to listen and almost immediately translate the lecture word for word. I didn’t even realise this was happening, but I’d gotten to the end of a two-hour lecture and realised that I’d subconsciously translated everything into English. As for the admin system and the ‘slowness’ of the country, well, you’ve just got to get over it. If you can’t beat them, join them. Next time we agree to meet at 20:00 for a pizza, I’ll most probably show up at 20:35, or even later. Depends how long I take to get ready.

As for the admin system and the ‘slowness’ of the country, well, you’ve just got to get over it. If you can’t beat them, join them. 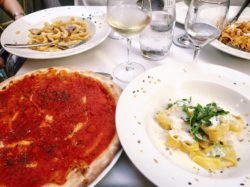 Bad days happen more often than at home, but that’s normal. It’s rare to come across a student who hasn’t encountered problems on their year abroad. How to deal with it? Pizza, pasta, gelato. Just eat something to remind you why Italy is the best country in the world.