Warwick’s Students’ Union (SU) launched “Are You OK?” day today, the start of a new campaign wherein the SU will host one a month.

It aims to promote more open discussion amongst students about mental health and encourages them to ask each other if they are doing alright – similar to the “It’s OK not to be OK” campaign that ran in the SU a year ago, but with a specific day of events.

Throughout each day there will be a number of events being held and each month will focus on a different theme.

This month the theme is transition; taking into account all the change each new and returning student will be facing during these few weeks. Some of the events include: transitioning into a veggie lifestyle, mindfulness and meditation, and a chippy social with Northern Society.

Three simple words can really mean a lot to someone who has poor mental health, or someone who is just having a bad day.

Chloe Wynne, Welfare and Campaigns Officer, put the idea of “Are You OK?” day on her SU election manifesto. She stated: “I found it odd that we have a Mental Health Awareness Week when mental health is around constantly, and not isolated to one specific period… I wanted to make it a regular feature of the university calendar.”

Chloe added: “I’m hoping to start a conversation on campus, and inspire an environment that is concerned with mental wellbeing and able to express that.”

Chloe has collaborated with various departments across the university, including Security, the Library, the Vice-Chancellor and Student Careers and Skills, as well as with SU staff.

Different societies and sports clubs also participated, with photos of teams and execs holding up the “Are You OK” poster, and even Warwick’s Cheerleaders spelling it out with their pom-poms. 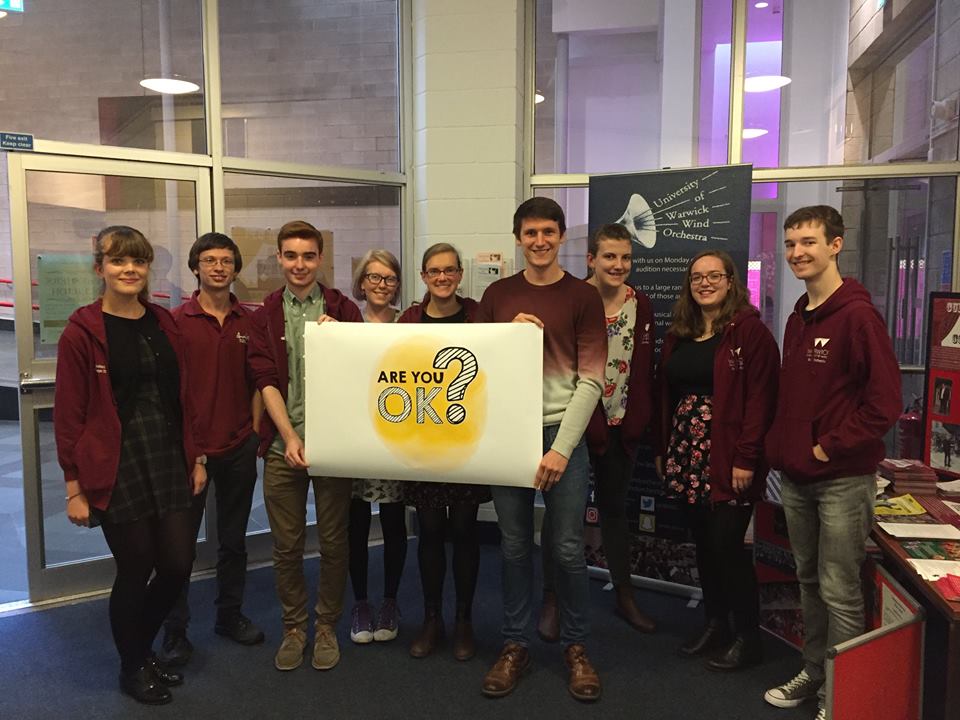 University of Warwick’s Wind Orchestra with an “Are You OK?” poster. Photo: Warwick SU

These various groups will all collaborate to provide a number of events which will link with each month’s theme.

Other themes coming up in the next few months include: housing, stress and time management, mental health, and Team Warwick.

Naomi Hyde, President of Warwick Mind Aware, praised the campaign. She said: “It is a good reminder that mental health issues don’t just need to be addressed at certain periods in the term (e.g. during exams and Mental Health Awareness Week) but that we need to look after our mental health daily.

“I also think the idea of “Are You OK?” is very effective. Three simple words can really mean a lot to someone who has poor mental health, or someone who is just having a bad day… Just by asking someone “Are You OK?” and really listening to the answer can turn someone’s life around, it could be the difference between them seeking further help or keeping to themselves and getting worse.”