Review: ‘Things I Know To Be True’

Things I Know To Be True is a beautiful production brought to the Warwick Arts Centre by the South Australian company Frantic Assembly. This world touring play has been reviewed by major publications, renowned theatre critics, and has received the best ratings – so what makes my review, as an undergraduate student with just amateur experience in theatre, any different?

I am here to tell you why every student at University must watch this play. I walked into the theatre with absolutely no expectations other than for it to be ‘good’. But what I came out with left me emotionally raw.

The simplest confusions and anxieties of this generation’s women is effortlessly portrayed through this one genuinely relatable character.

The play kicks off with a strong spotlight on the young Rosie Price, played by the brilliant Kirsty Oswald, who has just finished her solitary tour around Europe to “find herself” but instead has lost a part of herself. Her powerful delivery echoed things that have been churning in my mind for years now and I have never before related more to a character on stage. Strangely enough she was not just reiterating my thoughts, but the life of every young girl of this century. The simplest confusions and anxieties of this generation’s women is effortlessly portrayed through this one genuinely relatable character.

Soon after we are transported to her generic middle class family with the ingeniously portrayed father-mother duo Bob Price (Ewan Stewart) and Fran Price (Imogen Stubbs) and their children, who are now all grown up and ready to fly from their parent’s lovingly built nest. As a student who has left home to travel hundreds of miles away to study, the scenario in this little home in Australia rang true on so many levels. Obsessive repetitions of dialogues such as “Why did you have to take the taxi, I could have picked you up” are lines that all of us have encountered at some point from our parents and it is familiarity that makes the play so heart wrenching.

What makes this play stand out is the fusion of the intrinsically choreographed abstract movements that accompany the interludes between scenes.

The raw performances delivered by not one, but all members of the cast as they discuss extremely heavy issues such as transsexuality, infidelity, swindling, dishonestly all in the warm cocoon of a living breathing home immerses the audience in a trance that enables them to envision these events occurring to them – this only makes it easier for us to empathise with each and every character.

The play discusses issues that concur with the struggles of any young adult in the most spectacular manner. The use of the mise-en-scene, from the rose bushes that grow during the duration of the play to the how you can use a simple garden shed to convey so many meanings to incredible. However, above all, what makes this play stand out is the fusion of the intrinsically choreographed abstract movements that accompany the interludes between scenes. The spectacle is only enhanced by the clever use of lights that transform the stage, creating a clear balance between the interludes and ordinary scenes.

In the midst of the struggle of coping with university life, we often forget the ones we left behind at home. This play is a stark reminder of the more important things in life, of the ones who have brought us up to this wonderful stage in life with their sweat and blood – and a strong reminder to appreciate them when we can.

While today we celebrate Euripides and Hamlet for reflecting society in its truest form, many centuries down the lane the world shall celebrate Things I Know To Be True as the play that projected the essence of the 21st century.

Things I Know To Be True is playing at Warwick Arts Centre until Saturday 22nd October – tickets can be found here http://www.warwickartscentre.co.uk/whats-on/2016/things-i-know-to-be-true/. 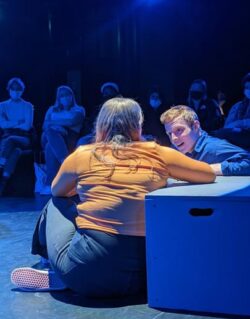 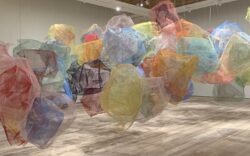