Two years ago, a friend played me Moose Blood’s song ‘Cherry’ from their debut album. From that day onwards, I have been hooked on their emo-pop/rock sound. I play their first album I’ll Keep You in Mind, From Time to Time relentlessly, everywhere and anywhere that I go. So when they announced that in August they would be releasing a second album, entitled Blush, the wait soon became unbearably painful.

Blush is undoubtedly worth the wait though. Continuing their soft-emo sound throughout the album, they rise and dive with each of their songs. Some continue the legacy of the debut with slow introductions and heavy riffs in the chorus, with the likes of ‘Spring’. Whilst others start on a high and carry it all the way through, such as their first single from the album, ‘Honey’.

However it’s lead singer Eddy Brewerton’s lyricism that set this band apart from the average emo group (I use the word “emo” with a pinch of salt; think less heavy metal in style and more heavy indie-rock.) 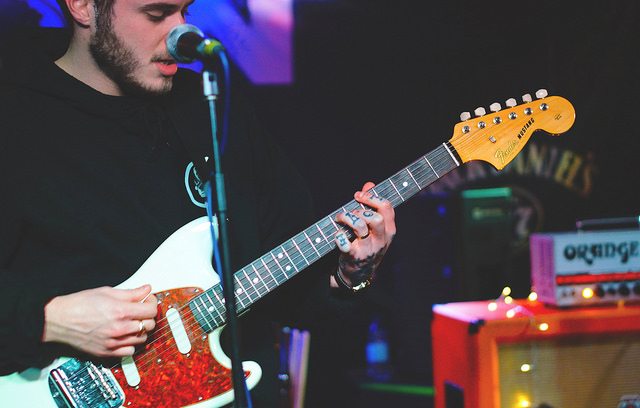 Songs like ‘Sulk’ and ‘Knuckles’, the two other singles from the album, grab you with their brutal honesty in the first few seconds: “I know that you’re stuck with him, I know/ You’ve got his name on your arm, his words on your knuckles.” There is something special about this band, the way the artists pour themselves into their music like very few others I have seen. The lyrics aren’t clichéd excuses for emotion, more like musical confessions and letters to the people in their lives.

I’ll Keep You in Mind, From Time to Time is high intensity in every way, encouraging audiences into head-banging and jumping, leading to moshing and stage diving- as I experienced myself when I saw them in London last year. Fast-forward to earlier this month and I’m seeing them play live again, the night before their album release. But this time, behind the stage-divers and mosh-pit-enthusiasts, there are more people like myself. We’re standing towards the back, still mouthing along to every word but not absorbed into the might of the pit. That’s because this band’s appeal is rapidly growing beyond their hardcore base. Never a huge fan of “emo” music and tending to stay away from heavy metal, I’m instead drawn by the power of the guitar riffs that match the emotional force of the lyrics.

No doubt that just like their first album, I’ll be playing Blush repeatedly from now on. So hopefully, if we wait another two years, we’ll have another set of ten beautifully crafted songs, on another aesthetically perfect album. Meanwhile, I’ll be taking every opportunity to see them live, as they are (dare I say it) even better in person.

Gallery image with caption: ‘The New Abnormal’ review: seven years on, The Strokes are still cornerstones of millennium cool 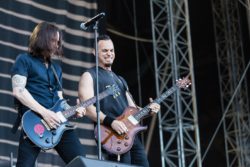 Gallery image with caption: Alter Bridge are on top form in Walk The Sky