The EU is a game set up more for big business than for ordinary people. Many people’s response to seeing massive structural flaws within the European Union is to say “Yes, of course the EU isn’t perfect, but it’s better to stay in and reform it than give up and leave.”

This is the Labour party line, which we tend to hear whenever an awkward truth is brought up in a debate: Yes it is awful, but let’s try and change that. Unfortunately, the EU has shown itself to be the least reformable organisation around.

The EU wants to become as close to a federal state as possible, pooling as much sovereignty as it can, and will stop at nothing to achieve this. This is well known and accepted in Brussels, and yet the sentiment still hasn’t quite reached us in the UK.

While federalism is old news across the channel, in the UK the Remain camp has been successful in understating the closeness of the European Union. The Five Presidents report, co-authored by five (unelected) presidents or former presidents of EU institutions, outlines very clearly the immediate future: a full monetary union, with harmonised taxes, labour markets and company law.

We will no longer be able to control our own taxes, and more of our laws will be out of the people’s hands. And do not for a second think that David Cameron’s renegotiation saves us: while he got a guarantee that the UK will not be subject to ‘ever-closer union’, this sentence has no legal substance, and will be quickly ignored by the Commission if the UK chooses to remain.

This is compounded on by the fact that in this scenario, commissioners could say “the people of the UK voted for this union,” stumping the argument that it goes against the will of the people, and paving the way for more integration. And the EU is great at ignoring the people.

We will no longer be able to control our own taxes, and more of our laws will be out of the people’s hands

When the people of the Netherlands and France rejected the European Constitution in referendums in 2005, the EU simply put the policies in a different order, renamed it the Lisbon Treaty, and passed it anyway. When the Greek people voted against intense austerity, the EU forced the hand of the leader, and the austerity measures were put in place.

The Remain campaign has tried to emphasise the uncertain future in the event of a Brexit, but look at our prospects upon staying: the aforementioned tax union, Turkey joining, and the possibility of the UK having to bail out the Greek economy once again, a point worth talking about.

Bailouts are supposed to be illegal in the EU – the Maastricht treaty, signed in 1992 by all EU members, has a ‘no bailout clause’, explicitly banning these interstate loans. And yet, when Greece’s economy was failing, threatening to cripple the euro, our federalist friends ignored this and demanded money from the EU member states.

We were also promised that the UK would never again have to loan Greece money in 2010, and yet in 2015 we were dragged into the third bailout of the Greek economy, paying £850 million. This was a promise that David Cameron once hailed as the first transfer of power back from Brussels. Torn up.

Bailouts are supposed to be illegal in the EU

We cannot reform the EU. The UK has voted against EU legislation 70 times since majority voting was introduced in the 1980s, and has lost every single time. But if 40 years of failed attempts to change the system hadn’t convinced us it was a lost cause, the final nail in the coffin was Cameron’s renegotiation.

The Left backing Brexit: It is no big dream

EU Referendum: Take the power back and vote 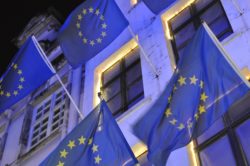 The Left backing Brexit: The conclusion