As a student with an interest (or perhaps a study) in film, I’d be making an unintelligible mistake in ignoring Birmingham’s Electric Cinema, a true cinematic landmark that lies within a mere thirty minutes of our very own campus.

Opened in 1909, The Electric holds the the oldest working cinema in Britain. While the building has been altered to fit various different usages over the decades, in 2004 it was restored to its original art-deco opulence. Just as the building’s current form pays tribute to its own past, the real significance of The Electric as an independent cinema lies in the consideration it shows toward the history of film. While chains such as Odeon, Cineworld and Vue would prefer to suggest that film simply didn’t exist before whatever obnoxious iteration of the Hunger Games came last, in recent months The Electric has bolstered its programme with essentials such as Frankenstein (1931), Gone with the Wind (1939) and 2001: A Space Odyssey (1968).

These films have all been shown as part of the deeply exciting Cinematic Time-Machine season, a year-long celebration of cinema’s global history beginning in the twenties and concluding in the modern day. For the next two months, the era of choice is the Sixties and the Seventies. Among the timeless pictures being shown, as they were originally intended to be seen, are Cool Hand Luke (11 June), Anatomy of a Murder (18 June), Breathless (19 June), Badlands (3 July), Dog Day Afternoon (12 July), Deep Red (15 July), The Passenger (17 July), and Enter the Dragon (24 July).

These films have all been shown as part of the deeply exciting Cinematic Time-Machine season, a yearlong celebration of cinema’s global history beginning in the twenties and concluding in the modern day. 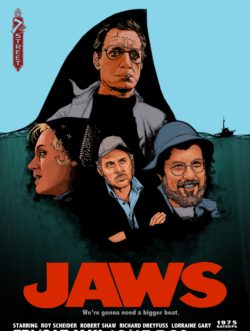 Worthy and essential as each of these films are, to those visiting Birmingham, there are two films that simply cannot be missed- that being Jaws (24 July and 31 July) and Once Upon a Time in the West (25 July). By taking Hitchcock’s theories of suspense and shock, Steven Spielberg’s Jaws not only redefined fear and its production, but also traumatised generations of audience members into trading the beach for the swimming pool and further persecuting an already maligned animal toward extinction – grotesque yet important evidence of the film’s lasting impact and success. The cunning suspense, restrained visuals, relatively starless casting, and ominous soundtrack from John Williams all combine to create a visceral experience, that at 41 years of age, still feels so remarkably young.

Similarly evergreen, is Sergio Leone’s Once Upon a Time in the West. Abandoning his screen image of all-American honesty and moral decency, Henry Fonda’s captivating and heartless performance as one of cinema’s best villains, is merely an epaulette on the shoulder of a film. With the aid of Leone’s powerful vistas and Ennio Morricone’s towering score, Once Upon a Time in the West is a true cinematic experience.

It is a cinema that not only cares for film, but cares for its audience too

It is filmmaking at its purest form – and in order to fully appreciate works of this level of grandeur and excellence, it must be watched at a venue such as this. Why, you ask? Because the Electric cinema is entirely centred on the concept of the perfect cinematic experience. Coupled with the art deco stylings, one can take regular seating or better, leather sofas at the back, each named after a star (I recommend Valentino). In terms of refreshments, at the Electric the food is remarkably sophisticated and served in the screening room itself, as ordered by text. It is for simple details such as these, at a time where the standards at chain cinemas are lower than ever, that one simply cannot afford to not make the extra effort to reach the Electric. It is a cinema that not only cares for film, but cares for its audience too – and in a diverse and engaging season as this, now really is the time to go.