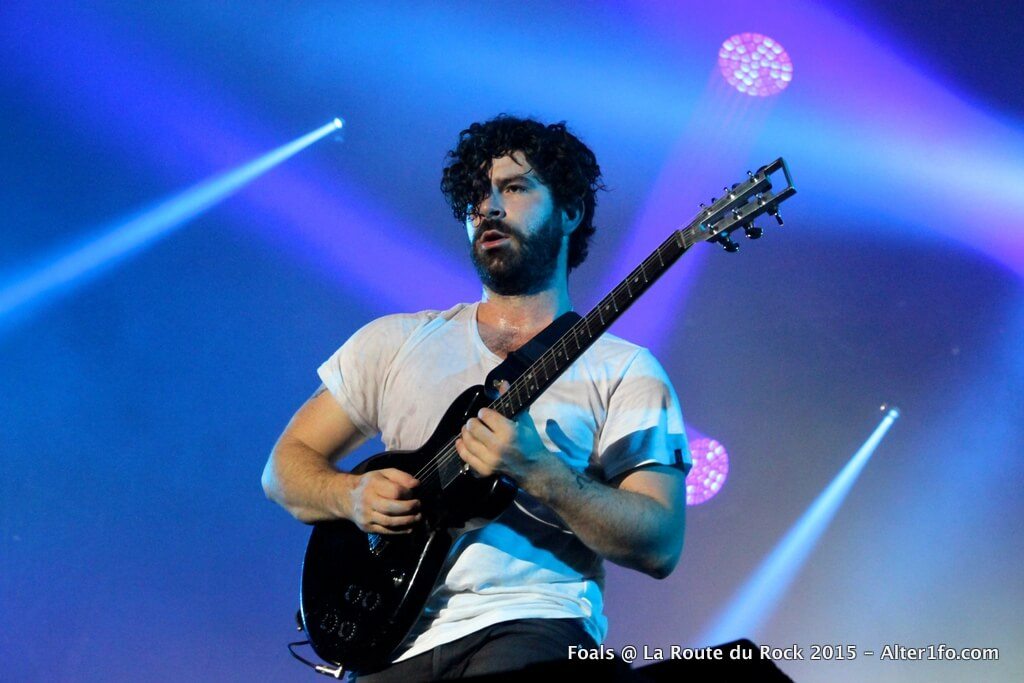 Foals are famous for their live shows; from their legendary early living room to the intense intimacy of academy-sized venues. Would their promotion to a 15,000 capacity venue change this? Of course not.

Support came from two members of Peace drunkenly pressing play on an iPod, and from Everything Everything – possibly the most underrated band with the most criminally overlooked album of the year.

While the DJ set was nothing short of genre diarrhoea – going from Nirvana to the Happy Mondays to Justin Timberlake – you would, however, be forgiven for reaching the end of the gig, but still talking about Everything Everything as you leave. Arguably the most interesting band in the country, Everything Everything provided a support performance worthy of a headline slot. Leaning heavily on 2015’s Get To Heaven, the album’s most disappointing track, ‘Fortune 500’, oddly proved to be the high point of the set. It saw frontman Jonathan Higgs, bassist Jeremy Pritchard and guitarist Alex Robertshaw, fight a passionate duel of politically charged vocals. Closing number, ‘Distant Past’, really set the standard for the night’s headliner to gladly follow.

Opening with ‘Snake Oil’, anyone who thought Foals’ rise to arenas would lessen their live show intensity was proved wrong when the first drum beat kicked in. Mosh pits emerged, almost instinctively, as if Foals songs just emit aggression-stimulating pheromones. This was equally sweaty, intense, and impressive thanks to the production and the scale of their most recent album, What Went Down.

In spite of What Went Down’s success, seminal math pop debut Antidotes (2008) got its deserved fair share. ‘Olympic Airwaves’, ‘Balloons’ and ‘Red Socks Pugie’ proved very danceable. 2013’s Holy Fire offered notable highlights: ‘Providence’ found a gear above that of the album version, including two filthy false endings; ‘Inhaler’ left lots of audience members short of breath; and frontman Yannis Philippakis performed ‘Late Night’’s guitar solo like a ballroom dance, gliding gracefully around the stage. While Philippakis unquestionably steals the show – a man of few words and fewer inches in height commanding such respect and adoration – an honourable mention must go to his bandmates. Jack Bevan (drums), Jimmy Smith (guitar), Walter Gervers (bass) and Edwin Congreave (keyboardist) all add intricate details to the delicate construction of the behemoth of sound that is Foals.

As ‘Spanish Sahara’ built, the crowd, as is tradition, sunk to the sticky Birmingham floor, finding empty beer cups and stray shoes lost on the arena battlefield.

The succulent ‘Spanish Sahara’ blissfully permeated throughout the Barclaycard Arena, providing a welcome break to the moshing madness that had not ceased since the band walked onstage an hour earlier. As the song built, the crowd, as is tradition, sunk to the sticky Birmingham floor, finding empty beer cups and stray shoes lost on the arena battlefield. The local charity shop mustn’t have believed their luck the following morning, with the sheer number of pieces of clothing discarded, like a space shuttle ejecting its rocket boosters after take-off, for the sake of maximum audience performance and enjoyment.

Dedicated to deep-sea divers, secondary school teachers, anyone working in milkshake parlours, and Yannis’s mum (for obvious reasons…), ‘A Knife In The Ocean’ was a welcome inclusion from the latest album. Alongside ‘Spanish Sahara’, it’s a decelerated, slow-building song, allowing for a breather; both are pieces of musical beauty in which it is easy to lose one’s self. Yet, at the same time, both songs are almost the antithesis of one-another. Although ‘Spanish Sahara’ is peaceful and pleasurable in its aims, ‘A Knife In The Ocean’’s harsh guitar chords stunned the audience into a painful submission towards the end of the set.

Philippakis was denied a chance to showcase his parkour skills by jumping into the crowd from a balcony – perhaps the only thing lacking from an otherwise very impressive statement.

As Foals’ hardest rocking single, ‘What Went Down’ resumed the chaos, inciting riot-like pandemonium. Whether it was me being corny, or perhaps the fruity smell from a nearby e-cig, as Yannis professed “When I see a man, I see a lion”, I saw not a crowd of people, but a crowd of lions, such was the feline ferocity of the audience. They once said their music aimed to “mimic the sound of the solar system”, but for five minutes the crowd got an insight into what the end of the universe would look like: ‘What Went Down’ was the soundtrack to that apocalypse.

During closer ‘Two Steps Twice’, Philippakis was denied a staple of any Foals gig: he had no chance to showcase his parkour skills by jumping into the crowd from a balcony. Searching through the seated sections for a platform from which to leap, he finally conceded defeat – perhaps the only thing lacking from an otherwise very impressive statement. An hour and forty minutes was enough to further assure me of their credentials – and, simultaneously, almost kill me.

Foals oozed the confidence and strut of a band recently receiving the Best Album accolade at the NME Awards, nominated for the Best British Band Brit Award, and topping this summer’s Reading and Leeds bill. Foals have grabbed the challenge of leading the much-needed new generation of British rock bands, and seem to be galloping away with it.