Nigel Thrift’s farewell meal cost the University £16,867, an investigation by the Boar has revealed.

The event was held on Thrift’s final day as Vice-Chancellor, January 29, in Butterworth Hall.

Two hundred people were invited, although the final number of attendees is unclear.

Current and former University staff and SU officers attended the event. Isaac Leigh, the current SU President, was amongst those who attended the meal.

He told the Boar: “I don’t personally agree with everything that Nigel Thrift did – the SU President and Vice-Chancellor are unlikely to ever see eye-to-eye on everything – but I didn’t have a problem with attending one commemorative evening.”

When asked whether he believed the meal was extravagant, Mr. Leigh replied that it was “well-attended”.

Peter Dunn, director of press and policy at the University, said the event “was held as a celebration of the University’s achievements under the Vice-Chancellor’s leadership; and in particular as a recognition for, and a thank you to, the people attending the event who had helped make those achievements happen.”

However Owain Mier, a second year German and Business Studies student, said: “The idea that a single meal accounts for almost 2 years worth of tuition fees is horrendously backwards in modern society. 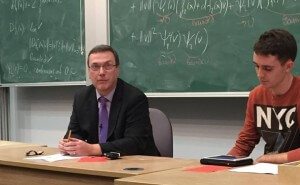