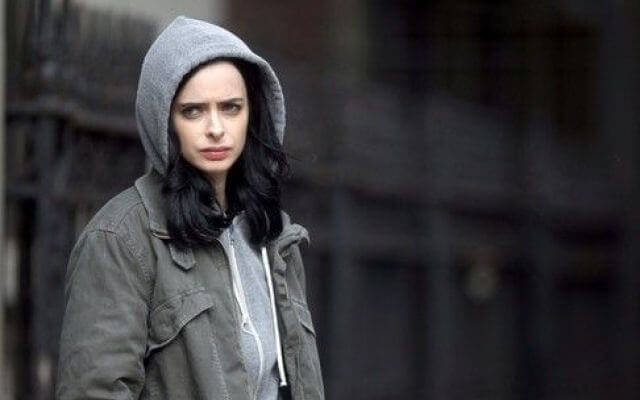 [dropcap]W[/dropcap]elcome back to the Jessica Jones series blog! Well done for resisting the seductive pull of Netflix and sticking to one episode a week- you have the restraint to get a first class degree and will probably survive the zombie apocalypse. 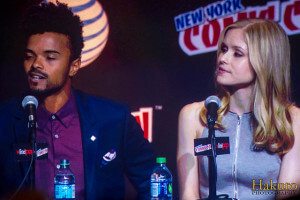 Episode two picks up after the Schlotmanns’ murder, with Jessica interrogated by Detective Clemons (Clarke Peters) and consequently released without charge. Jessica ultimately decides it’s “better being alone” when Kilgrave is pursuing her; her isolation is at least in part symptomatic of the trauma she is still living with, but solitude also seems to be a part of the New York lifestyle.

We’ve only had glimpses of the characters around Jessica so far- her slightly incestuous neighbours Robyn and Ruben (Colby Minifie and Kieren Mulcare), addict Malcolm (Eka Darville), widower Luke- but they also lead insular, solitary existences.

Jessica visits the newly imprisoned Hope, who responds with sporadic bursts of rage, even telling Jessica that she should kill herself for what Kilgrave did. I’ve already had one argument with a friend regarding Hope’s character, and I’ll defend her here again. Hope is angry, scared and traumatised whilst in prison; lashing out irrationally at Jessica (one of her few points of contact with the outside world) is a perfectly normal reaction, if not a logical one.

The beauty of the writing in Jessica Jones is that it doesn’t ask you to condemn Hope for her cruel words to Jessica, nor does it condone her actions- she is not wholly sympathetic in that moment, but she doesn’t have to be to deserve our sympathy.

Hope is just one of many characters in episode two who is not only isolated, but has their agency taken from them. Trish’s attempts to learn self-defence so she isn’t reliant on Jessica’s aid is a minor example, but indicative of the precarity of living with the threat of violence. At the other end of the spectrum is the heart wrenching scene with paralysed ambulance driver Jack, who asks Jessica to kill him. The world of Jessica Jones is peopled by those desperate for control of their own lives, if only to end them. Kilgrave’s amorphous presence denies them this basic right, proven shockingly when he manipulates children into hiding in a cupboard and soiling themselves. 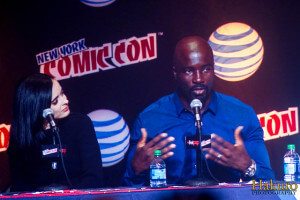 Jessica’s relationship with Luke Cage reached an interesting culmination in this episode- if ‘AKA Ladies Night’ did a great job of introducing us to Jessica, then ‘AKA Crush Syndrome’ made Luke an even more compelling character.

Luke, like Jessica, is revealed to have special abilities- in his case, superhuman strength and unbreakable skin. Mike Colter’s a joy to watch on screen- his deadly nonchalance during the bar fight sequence, especially his sardonic eye-roll after a bottle is broken ever his head, will sustain me for days.

Better articles have been written about the importance of his oncoming Marvel series in the aftermath of so many racist police shootings in the US, but it’s a point worth reiterating- Luke is not only an iconic long-running black superhero (first debuting in 1972), but he’s a man whose unbreakable skin means he cannot be shot. The political implications of such a character in the current context are huge. Luke Cage, like Jessica Jones, has proven himself to be a hero for the modern era.

Precisely what Jessica’s connection to Luke’s late wife Reva is, and why she was able to disobey Kilgrave in the accident that nearly killed him, remain unanswered queries. We also got an insight into Kilgrave’s only weakness is- surgical anaesthetic. This episode didn’t have quite the thrilling and dramatic atmosphere of the pilot, but remains highly entertaining. Bring on Episode 3, ‘AKA It’s Called Whisky’ – let’s renew our pact to resist the urge to binge-watch it, and head back here next week!