[dropcap]W[/dropcap]ar and Peace saved its master class on the brutality of warfare for its penultimate episode. The Battle of Borodino in War and Peace occupies the final twenty minutes of the episode, with the previous scenes all building up to it.

Napoleon has launched an all-out offensive on Russia, and is finally given a proper scene of dialogue. Boris delivers a message to the French tyrant, and is charmingly confused at Napoleon’s insistence that Russia will soon be under France’s heel.

I had to re-watch the Battle of Borodino twice after seeing it, as it is expertly done – this level of detail in warfare is rare in television 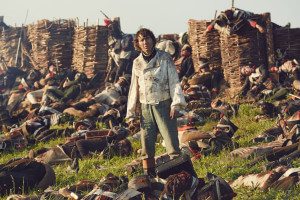 Pierre gets in on the action. Image: BBC and Robert Viglasky

The most unlikely witness (and participant) to the conflict is Pierre Bezukhov, who has decided that he needs to see war for himself. He is initially surprised that he feels no fear, but the realities of the situation soon shock him out of his dazed state, and he realises that he is a long way from the safety and spiritual haven of Freemasonry.

Andrei is also a combatant, having returned to the front after Natasha’s betrayal.

He cannot bring himself to forgive her, despite Pierre’s pleading, and clearly sees the battle as a climactic point in his life; his apparent death-wish returns, as he stares vacantly at the bomb that is soon to blow up in his face. Personal grief may play a part in this; his father, Bolkonsky, has just died. 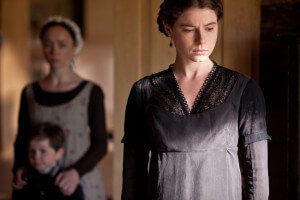 This scene, and the build-up to it, shows Jim Broadbent at his best, and it is poignant to reflect that Bolkonsky is determined to stay and fight Napoleon not just for Russia, but for his loved ones.

Princess Marya, however, is the unexpected star of the episode – her usually timid self rises to the occasion when the dual pressures of family bereavement and the approaching army strike the Bolkonsky household.

There are several touching scenes which provide relief from the blood and the anguish. 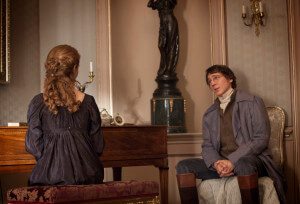 Natasha and Pierre share a moment, with Pierre visibly conflicted about whether or not he should declare his feelings for Natasha.

Finally, Andrei and Anatole, both almost fatally wounded (Anatole loses a leg – I can still hear the thud as it hits the table), bond over broken bones.

A few commentators have pointed out that there are an unrealistic number of coincidences in this adaptation – this is true, but inevitable in a six-hour adaptation of a thousand page novel.

I can’t imagine how the Battle of Borodino in War and Peace reads on the page, particularly from Pierre’s point of view, but I am now eager to find out.

The final episode airs this Sunday and, with Napoleon intent on taking Moscow, and many personal matters still left to be wrapped up, this has the potential to be quite an astonishing hour of television. 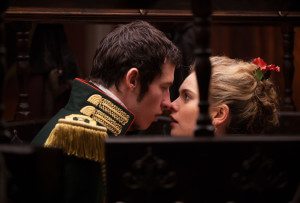 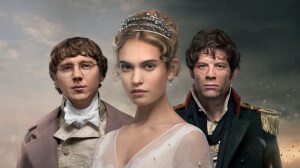