[dropcap]W[/dropcap]ith the recent release of Victor Frankenstein, Shelley’s 1818 novel, on which the film is based, has risen once again in people’s minds. But how far can Mary Shelley’s original gothic tale be considered as truly terrifying today as it was to a nineteenth century audience?

The idea of Frankenstein was dreamt up by a 17-year-old Mary Wollstonecraft Shelley as part of a scary story competition with Lord Byron (she won, obviously). There is no doubt that Shelley’s graphic descriptions of murder, sta 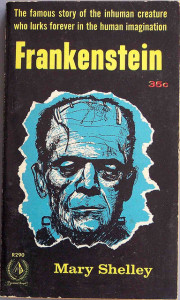 lking and revenge fit within the boundaries of horror, and for the reason these themes are still shocking today.

Take EastEnders as an example. It seems that a day hardly goes by on the Square when somebody isn’t being murdered or beaten up – and this is partly the reason so many tune in every evening to watch. So is Frankenstein equally as disturbing, even though it was written for a completely different audience?

Shelley doesn’t disappoint as far as murder is concerned. A grand total of six characters fall victim to the monster via his favourite method of killing (strangulation) or as a consequence of his actions. Poor old Victor hardly had any family left by chapter twenty-four.

Shelley doesn’t disappoint as far as murder is concerned

Yet there are other, less gruesome features of Shelley’s writing that may not be so terrifying anymore. Themes of science and discovery are raised by Shelley throughout her novel, both of which were relatively new fields in the early 1800s. Despite great interest in anatomy, little was known about the inner workings of the human body; hence, Victor’s ability to “bestow life upon inanimate objects” would have been perceived as entirely possi 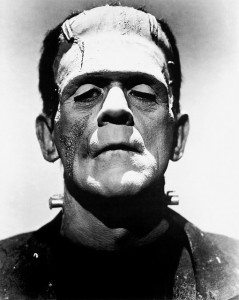 Walton’s opening of the novel with his adventures to the North Pole through “pathless seas” would also have scared a few people.  With polar exploration in its infancy, Shelley had huge scope to invent a setting that would have seemed perfectly feasible. What was once terrifying now isn’t. A modern audience can laugh at these misconceptions, knowing it would take a lot more than grave robbing to invent life, and the North Pole really isn’t as eerie as Shelley claims.

Whether or not inciting fear was Shelley’s intention, the twenty-first century obsession with the tale is as strong as ever. Recent retellings have lived up to contemporary standards of horror, with Cumberbatch’s portrayal in the 2011 theatre adaptation portraying the monster as twisted and isolated.

Yet, there is little evidence within the text to suggest that this is how Shelley envisioned her antagonist. His limbs are described as “in proportion”, and his features “beautiful”; not ugly or green, as many imagine. So is it the text itself that is scary, or the way we have chosen to interpret it?

Whichever way we decide to look at it, there is no denying that Shelley’s tale of monsters and murder will continue to live on as one of the greatest gothic tales ever told. Whether we shudder at the right bits or have changed certain details to suit our ideals doesn’t really matter a great deal, does it?