How to be a student and a CEO

The Boar speaks to Timothy Armoo: entrepreneur, CEO of Fanbytes and a true inspiration

“Bullshit.” Second-year Timothy Armoo’s words when I asked if successful entrepreneurs are just ‘born with it’. He would know. At just twenty-one, Timothy has set-up set up two successful businesses which have generated tens of thousands in investment and revenue – enough to give his dad an early retirement.

“Everything can be learned” was a point he was keen to stress. But I’ve always thought there is a certain alchemy to setting up a business – no two success stories are ever the same; there’s no application form or rulebook. The essential question of how bothers most into never trying. For Timothy, the answer is pretty straightforward: “Determination and focus.” His answer is as simple as it is surprisingly convincing. “Determination and focus. Determination means you just keep going until we get this right.” And focus, I asked, how’s that any different? “Focus is concentrating on the one thing we’re going to do incredibly well.”

As CEO, his job is to be optimistic when others aren’t

Business is good. Revenue is up in the six-figures, they’ve got an impressive client list and have gained plenty of important media attention. But it didn’t start like that. Timothy and his co-founder were pumping in thousands (of their own money) when potential clients weren’t answering their calls. He recalls a dark night of the soul when he was ready to pack it all in. “One more day. Ambrose, my business partner, said let’s just give it one more day.” They received just five interested responses the next day – out of five hundred emails. But it was enough of a whiff for them to follow the scent. They honed in on working with fashion brands and were able to expand from there.

The experience was a turning point. At the time it was just Timothy and Ambrose. Now they have employees (five) and public displays of self-doubt are no longer an option. As CEO, his job is to be optimistic when others aren’t and level-headed when the hype gets a little too intoxicating. “I can’t have a breaking point.”

Of course, it’s easier not to fall over when you have someone to lean on. ‘We’ is the entrepreneur’s pronoun – in most cases it’s the royal we, a ploy to give off the impression of size and momentum. In Timothy’s case, however, it’s clearly a genuine expression of how important he and Ambrose are to each other and the business. Learning to work with others, “to get the best out of people”, was a steep and important curve.

The burden of leadership can distort relationships. For Timothy. it’s important to be “unassuming” – which he is – dressed normally, happy not to talk about himself and not pretentiously bashful. “I’ve found that being a [successful] entrepreneur is quite humbling. It all feels surreal. Ambrose and I are two black boys from south London – we’re not supposed to have all this.”

His unassuming demeanour and humility are essential to maintaining his most important assets: people. “Your network is invaluable.” One relationship that proved particularly valuable was with his mentor Toby Austin. Timothy begged for a job with Toby’s company during a gap year; they said no. So he just asked to keep in touch and they did. Toby offered support and advice for a few years until he eventually invested tens of thousands into Fanbytes and got a few others to do the same. Potential entrepreneurs are always interested to know where and how they can get funding. Apparently saving numbers, keeping in touch and being a nice guy go a long way.

As we are talking the hour hand creaks up to three and the minute hand falls past five, then ten until, at twenty past, I’m worried he has basically missed his lecture. “Oh I’m not going,” he says. “Have you heard of the 80:20 principle?” (Vaguely.) “I focus my time and energy on the things that have the most impact. Some lectures are more worthwhile than others. I try to work smarter not harder.”

Notice: This article was amended on 23/11/15. Fanbytes has generated ‘tens of thousands’ in investment and revenue. The initial version claimed this figure was ‘hundreds of thousands’.

A career in front of the camera

A deadline on success – Warwick students on feeling the pressure to be successful at a young age. 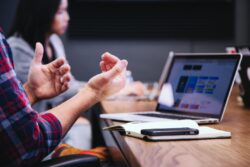 Anti-racism training: how do we ensure a meaningful and long-term impact?