There is a fairly long standing theory that Ridley Scott only makes a great film once every decade. Varying tastes withstanding, there are many people, myself included, who would be inclined to agree. His latest efforts, Prometheus and that other film about Moses that will not be spoken of here, were visually compelling yet underwritten and lazy. It was clear that Scott didn’t have material that matched his skill behind a camera, something which has thankfully turned around for The Martian.

In fact, The Martian almost watches like a counterpoint to Prometheus, on the surface the films (mostly) both take place on a desolate, uninhabited planet – but where The Martian most notably differs, is in its celebration of scientific process and method, and an unwaverng dedication to smart people, as opposed to ‘biologists’ who poke alien snakes and can’t read maps. NASA’s strong involvement speaks volumes to this films celebration of science and exploration, space being the final and most challenging frontier.
Adapted from the novel by Andy Weir by Drew Goddard (Buffy, Daredevil, The Cabin In The Woods), The Martian is a surprisingly hopeful testament to human ingenuity in the face of extreme adversity, even on another planet. Matt Damon shines among a pretty stacked supporting cast, not just because of the compelling narrative and pretty exotic location, but because of the sheer charm he brings to the personality of astronaut/botanist Mark Watney. 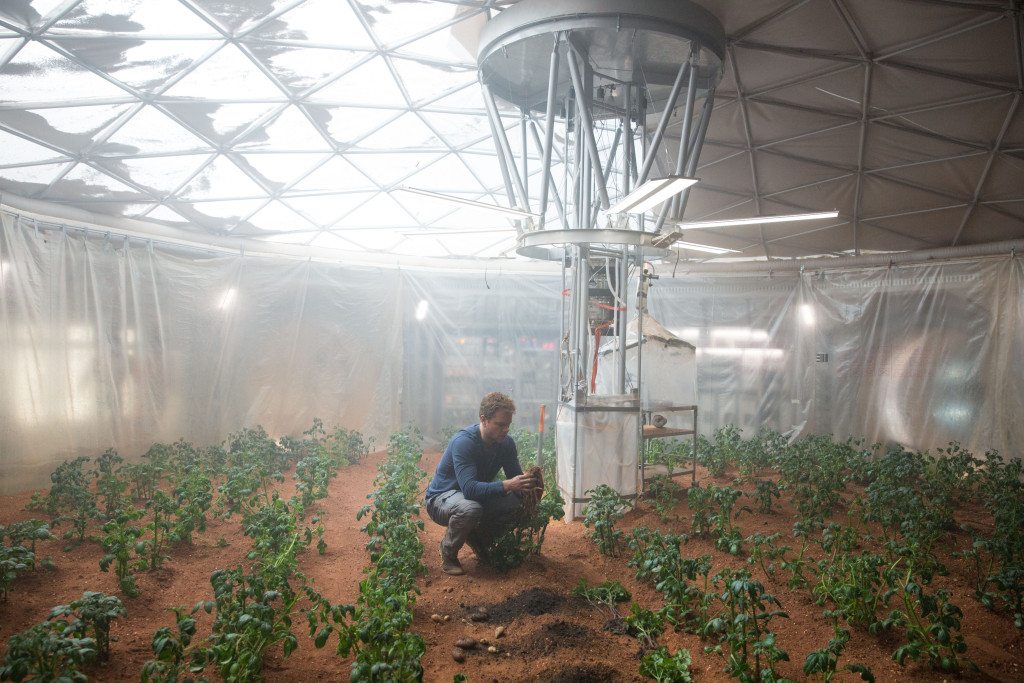 The memorable characterisation of Watney is one that has been missed from recent Ridley Scott pictures, and brings to mind the character of Ripley from the Alien franchise. Smart, funny, and apparently as hard as nails – faltering once or twice when struck by disaster, but never giving in – the film expertly uses his physical isolation to bring weight to his situation, rather than simply writing the character as lonely or depressed. Like many survival films The Martian is a positive representation of the human will to live, but is unique in its surprisingly upbeat sense of humour that runs throughout the film.

Unsurprisingly, The Martian is also a gorgeous piece of cinema. Harry Gregson William’s score undertones Scotts’ beautiful yet desolate visuals with a sense of beauty and hope, the visuals and soundtrack work together to elevate it to something more than a survival film set in space. Scott prides himself on building sets from scratch and filming on location, enhancing the realism of the film and raising the stakes by doing so– this is a world that is dangerous, and we are often reminded that Mars isn’t really meant to accommodate life – Watney for the most part somewhat exempt from the notion that he can survive the intense spectacle that sci-fi often brings.
The Martian is potentially the most ‘feel-good’ film that Scott has ever done, but the optimism, lightness and happiness of the film doesn’t feel grating or unearned, it just makes it all the more powerful.