The three sisters. Image: The Loft

Walking into the auditorium, the audience is greeted by a quaint scene: the courtyard of a house with a glimpse of the dining room inside, ornate pieces of furniture occupying the stage, a piano sitting in the corner, adorned with flowers, under an armchair is a small pile of books. It is this intricate stage design that immediately draws the audience into the world of the play.

The first members of the cast enter and after they sing a haunting tune as an ensemble, the play begins. An aspect of the performance that soon struck me was the actors’ use of space. There were chairs surrounding the stage, providing plenty of opportunities to use levels which the actors took full advantage of. 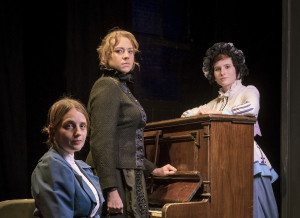 The three sisters. Image: The Loft

The cast created striking tableaus, one with the characters seated around a dining table, frozen mid-action whilst Marsha delivers a few lines of poetry; or the three sisters scattered across the stage, each lying, sitting or standing. These moments of rest gave the audience some time to absorb the scene before them.

Similarly, the subtlety in dialogue, the actors’ use of silence and intonation, brought Chekhov’s writing to life. Yet as the interval drew closer, I found myself unable to quite believe the characters.

Three Sisters is the story of a family longing to return to Moscow. However, as each of the three sisters wistfully sighed Moscow’s name, I was not quite convinced of their longing. A conversation with one of the audience members, who happens to come from a Slavic country, also revealed the obvious: despite the importance of geography in the play, there is no other way of identifying the characters’ Russian heritage apart from their verbal mentions of Moscow. Even though the actors took time and effort to learn the pronunciations of Russian names, the story could be taking place anywhere.

Admittedly, it is difficult to convey a sense of place in a translated play. It would not help, in my opinion, to speak the dialogue in Russian accents or to plant a Russian flag in the background, but the production perhaps misses some other potential opportunities to indicate a Russian setting. For instance, the cold weather is not apparent until someone mentions frost. The characters are neither dressed for the cold, nor do they act cold when they are in an outside space.

Regardless of this, the performance still presents moments of engagement. When Marsha says goodbye to Vershinin, or during Andrey’s monologue about marriage, it is difficult to tear one’s eye away from the stage.

Apart from these instances, I would not say that the performance makes a lasting impression. There is not much one can brand as ‘wrong’ with the production; some aspects were in fact admirable. Nevertheless, I did not find myself connecting with the characters. I did not share the sisters’ longing for Moscow, nor their sorrow at the end of the play.

Thus, whilst the performance is worth a visit to experience and explore Chekhov’s story, the Loft Theatre’s version does not quite offer anything completely extraordinary. 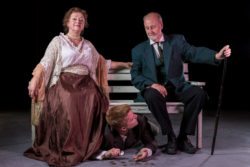 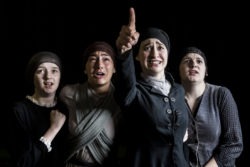