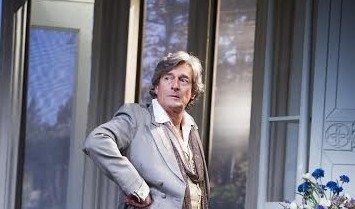 A scene from The Importance Of Being Earnest at the Harold Pinter Theatre. Directed by Lucy Bailey.

Belgrade presents meta-theatrical classic ‘The Importance of Being Earnest’

Featuring TV and film favourites such as Nigel Havers and Martin Jarvis, The Ambassador Theatre Group’s ‘The Importance of Being Earnest’ is a charming and humorous adaptation of the Oscar Wilde classic. Director Lucy Bailey delivers a twist, employing a popular meta-play mechanic.

a charming and humorous adaptation of the Oscar Wilde classic.

Wildes’ critically-acclaimed masterpiece, subtitled ‘A Trivial Comedy for Serious People’, follows the escapades of Jack and Algernon as they assume false identities to escape the pressures and obligations of society and win the hearts of their objects of desire, Gwendolen and Cecily.

The play explores the nature of Victorian society and its emphasis on wealth and status, particularly exploring marriage as an act of social elevation, rather than as a demonstration of love. Wilde also mockingly portrays the selective nature of Victorian morality, with the two male leads repeatedly lying to and deceiving other characters, yet being forgiven once their social standing and wealth are established.

On arrival the audience is greeted by a spectacular set, detailing a beautiful two-story house,
reminiscent for me of the quality and style of set seen earlier this year during the Royal Shakespeare
Company’s run of ‘Love’s Labour’s Won’. However the keen-eyed may notice that the house isn’t
entirely period for the Wilde’s late-19th century setting.

The start of the first scene is not announced by the raising of the curtain, a musical introduction or a lighting cue, but simply by Nigel Anthony’s entrance as the Butler, Lane, and the delivery of his first line among sounds of hushing from the audience. As Havers enters as Algernon, sporting a pair of bright red Nike trainers with his Victorian costume, it becomes apparent that there is a device at play, but it’s not until the scene is interrupted
by a fluffed sound cue and interjection from the Director that the true nature of the twist is revealed.

The play is set against the backdrop of a dress rehearsal of ‘The Importance of Being Ernest’ by a fictional amateur dramatics group, The Bunbury Company of Players, held in the home of two members of the group. The mechanic of the reunion of the Company to perform a revival of ‘The Importance’, as they fondly refer to it, is cleverly used to explain the fact that the actors are significantly older than the characters they play.

The first act is littered with costume, lighting and sound goofs and gags, out-of-character quips from the cast and interruptions to the course of the play by the Director. In between scenes, there is charming interplay between the members of the amateur group, with affairs and tensions amid members becoming apparent. This establishes the nature and bonds between the characters in the group and the use of the meta-play well, however it also serves to distract somewhat from Wilde’s play, particularly during the establishing scenes. The cast rise to the challenge of playing two layers of character well, with some clever amateurish overacting, although the first act ends with a nod to both Anthony and Jarvis’ panto careers with a rather cringe-worthy wink to the audience and both actors prancing off stage.

In Act 2, references to the amateur group are significantly more light-handed and disappear altogether as the act progresses, becoming a more serious and dedicated version of Wilde’s play. It is during this part of the performance that the quality of acting can really be appreciated, with a particularly excellent portrayal of a loathsome and haughty Lady Bracknell by Sian Phillips.

Overall the use of the meta-play mechanic was an interesting twist on the performance. I enjoyed the story of the Bunbury Company of Players, felt there were some intriguing characters and sub-plots and was left wanting to know more about their story. As a presentation of ‘The Importance of Being Earnest’, the first act felt a little too slapstick with the second act being much more enjoyable as I was able to engage in the play once it was being played, literally, in earnest, although the set and costumes were excellent throughout.