After the first two films in the Despicable Me franchise, everyone had fallen in love with the banana loving minions. What was not to love? It would be impossible to be immune to their adorable gibberish language, general loveable stupidity and accidental genius coupled with unwavering loyalty.

A spin off film, where they are the stars of the show, was a foolproof idea to capitalise on when considering their popularity and it seemed inevitable. Their solo story tells of their history from the beginning of time, the ins and outs of their story before they came across Gru. Managing to kill off all of their masters, including a dinosaur, Dracula and Napoleon, one thing is clear from the outset: minions ought to come with a hazard warning.

Three of these capsule shaped creatures, Stuart, Bob and Kevin, take on the challenge of finding a new master. They come across Scarlet Overkill (voiced by Sandra Bullock) at a villain convention in Orlando, Florida and they are sent on a mission to London to steal the Queen’s crown. 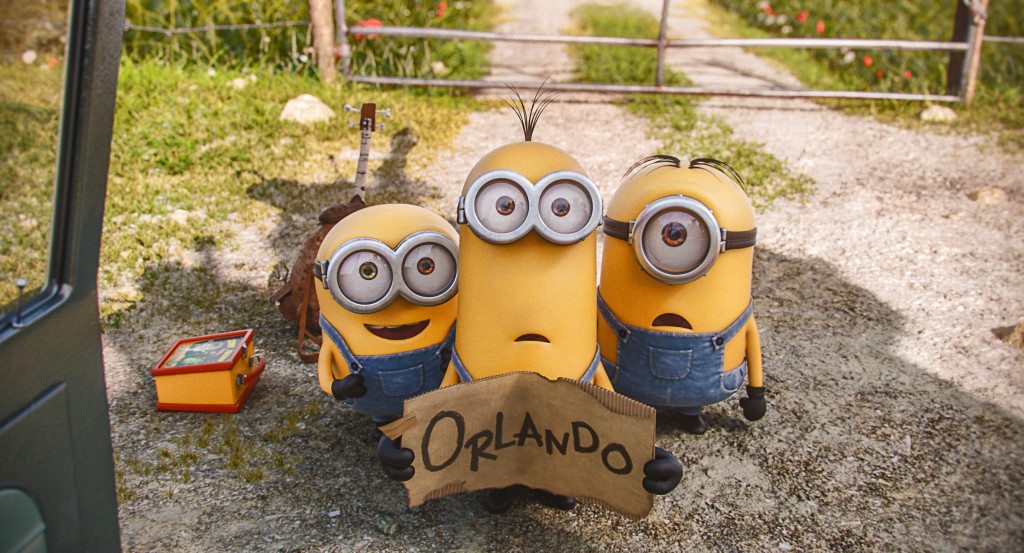 Though not a bad premise, it starts to fall just a little flat from this point onwards. With some subtle allusions and cultural references (such as The Beatles), there are moments that hook the audience. It does start to becomes a little monotone from this point on though, with the jokes being less funny than those in the Despicable Me series and a few too many clichés (yes, the British love tea, we all know that) and predictable scenarios.

It’s difficult to find Scarlet as endearing, funny or engaging as Gru. She isn’t as vulnerable or quirky and doesn’t capture our attention or incite any real emotion. Her relationship with her husband, Herb, is neither disgustingly gooey or a horrifying match made in hell. It verges on gooey, but isn’t quite enough. As a villain she doesn’t scare, horrify or intrigue. In fact, I was more enamoured with the family that the minions hitch a ride with to get to the villain convention or some of the other less nefarious villains, like Frankie Fishlips. 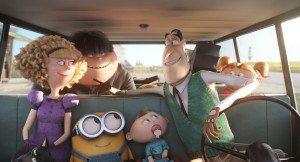 Though after the first half an hour the plot starts going downhill as well as our interest in villain Scarlet Overkill, the inherent lovableness of the minions themselves help save the day. Stuart, Bob and Kevin manage to steal their way into the Tower of London and keep us entertained. Their gibberish doesn’t become irritating or nonsensical, but somehow we know exactly what they are communicating through a combination of facial expressions, body language and random French or Spanish phrases. It keeps them more likeable than ever, which I had doubted would be possible, having hated characters like Pingu as a child.

Though after the first half an hour the plot starts going downhill as well as our interest in villain Scarlet Overkill, the inherent lovableness of the minions themselves help save the day

The unfortunate irony is that in the Despicable Me films there seemed to be a unanimous and consensual yearning from everyone that there needed to be more minions. They shouldn’t have been relegated to minion or sidekick status but deserved to be centre stage. Yet having been granted the wish, I’ve been left disappointed.

It’s not because I was bored by them, or because they become less likeable. It’s simply because the plot line and their relationship with Scarlet isn’t enough to keep us hooked, and their adorableness, though a massive selling point, isn’t enough to prop up the film. They are sadly best placed as minions as part of another story because their own story simply isn’t imaginative or original enough.

It’s the end, where we see just how the future  with Gru is going to pan out, that really grabbed me. It reminded me just how great Gru really is and, although I am a Sandra Bullock fan, her character is more than underwhelming. Not a bad film by any means, while there are still moments of humour here and there, it is simply an average animation film. However, because of the roaring success of Despicable Me and Despicable Me 2, an average animation film is not at all what audiences were expecting.

It won’t have you going bananas, but if you’re desperate for more minions in your life, it’ll do.