Tomorrowland: A World Beyond

What is Tomorrowland? A remnant of a nostalgia ingrained past; a light, fairground beacon of atypical construction that champions unity and ingenuity. It’s a materialised celebration of creator Walt Disney’s original dream, with his eternally idealist shadow hanging long over the films leitmotif. This is a world of infinite conception that looks forward, holding high principles based on possibility and optimism seen through the gaze of a child.

The film guides you around its world to evoke the awestruck wonder that is found in the marvels of science and the virtue of intelligence and harmony. Fans of Randian Objectivism are going to have a field day with this. Its strengths and weaknesses rest upon this gaze, raising inevitable background questions that the film doesn’t feel the need to answer into order to sustain a sense of amazement. Suspension of disbelief is of course crucial in any fiction, but in particular when it concerns technology. The marriage of the arts and practical engineering is essential in a place run by individualist aspirators, who seek the integrity of creation and world shaping innovation above all else in a world that has even (apparently) found a way to stall the aging process. A person invents because they can, without the vindication of hindsight towards its ends – this didn’t work well for Jurassic Park, but it sure does here. 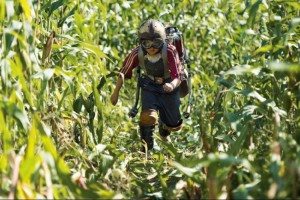 As a culture we have allowed our own obsession with the dystopia and destruction in the media that we consume, and have possibly set ourselves down the path of a self-fulfilling destiny where we are doomed by our own unwillingness the change. The film and its characters challenge you to look beyond these newfound ideals to something much braver and retrograde. It’s all a lot closer to the science-fantasy of Star Wars than direct science-fiction, but some of the bravest pictures in the genre have been to ones that aspire to seek more from its audience beyond visual stimulation. 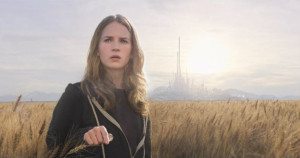 Speaking of which, this is a technically gorgeous looking picture of sprawling virtuosity and vision. Bird’s direction as an animator means that every shot and sequence is storyboarded to perfection with near flawless construction – its scope fortified by an ever reliable Michael Giacchino score that really carries the whimsy of its Spielbergian adventure tone. The performances from everyone are rock solid. Clooney hasn’t been this fun in a major blockbuster for years, while the terrific Britt Robertson carries the film effortlessly in his absence. The real standout though is a starry turn from Raffey Cassidy, who steals the show through striking minimalism and pitch perfect delivery. Even Hugh Laurie in a minor but pivotal role is well judged. If there’s a weakness to these figures then it’s the glue that holds them together.

While the themes and ambitions of the story fly high at all times the biggest disappointment comes down to the brass tacks of simple, basic storytelling. It may be a dead horse to beat now, but it still stands to say that many of the films narrative problems appear to stem from the Lindelof hand that has tightly clasped the marketing for this picture. Contrivances, inconsistencies and downright foolish character decisions at points are abound here, but Bird keeps the engine running at such a level that it rarely infringes upon the enjoyment factor. What does though is the very design of the plot itself.

While the themes and ambitions of the story fly high at all times the biggest disappointment comes down to the brass tacks of simple, basic storytelling.

The enigma of Tomorrowland is held so far back that the journey there takes up theentirety of the first two acts, although it does add an anticipatory attitude to proceedings. But when we finally arrive in this mythical location, the script appears to abandon all nuances in favour of a rousing lecture concerning the treatment of our world and each other, and how we must all aspire to be greater than the sum of our parts. Its design begins to fall apart then as we detour into a far more conventional climax, and ending on a final note that (while reassuring) never quite feels as earned or justified as it possibly needs to be.

While a disappointment in some regards that takes a while to get to the point, Tomorrowland is otherwise a very enjoyable and humorous effort that once again establishes Brad Bird to be the visionary that his prowess suggests; always encouraging with sheer determination pushing forward its large contemplative ideas with a lightness of approach. It’s never the film that it could be, but for the most part it’s the film that it has to be – and considering the honesty in its heart, it’s more than enough to keep it on its feet.