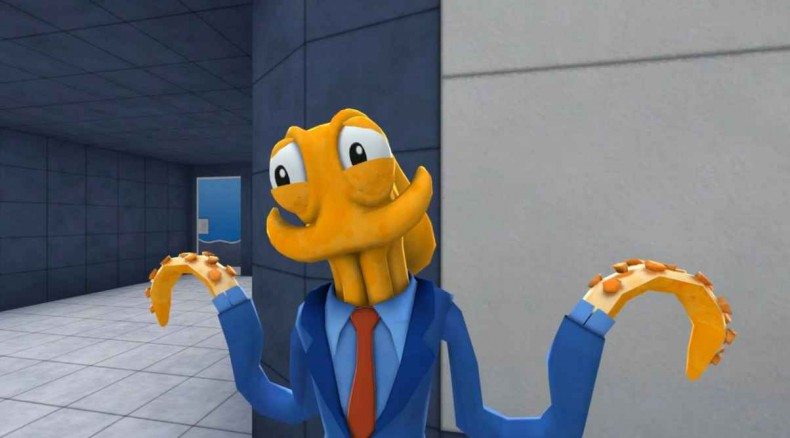 I know we’ve all been there: you want to play something in your living room, something that has enjoyable, local multiplayer that all your friends can get involved with, but you just can’t. Every single game you pick up has, plastered across the back, the words ‘Local: 1 player’. I thought the days of good, honest, fun, local multiplayer were behind us, becoming little but a speck in the rear-view mirror as we drove, pedal to the metal, towards online matchmaking city. Never again did I ever expect to have a fun and enjoyable time gaming with people who were actually there in the room with me. How very, very wrong I was. Enter Octodad: Dadliest Catch.

[divider]
I picked this game up on something of a whim. A friend of mine had recently played it with his housemates and had given it nothing but rave reviews. I noticed that it was on sale on Steam, and I must confess I am an absolute stickler for discounted games, so I bought it there and then. I have never been more satisfied with a purchase of a game from the Steam Store.

The premise of Octodad: Dadliest Catch is this: you play as an octopus living in suburbia that must hide the fact that he is an octopus dressed as a human being from everyone around him. From making coffee in the kitchen to taking your children out for the day to an aquarium, each task appears easy on paper, but is much more difficult and hilarious in practice. As the player, you control each of Octodad’s limbs individually and, as such, even the most menial tasks become something of a challenge. Put simply, Octodad is a game that, really, needs to be played with one or more controllers to get the most out of. Everyone I have played it with have had an absolute blast, especially when you factor in the limb-switching, roulette-style mode. At random intervals, this mode changes the limbs that you have control over, creating a dynamic and sometimes hilariously frustrating party game for everyone to enjoy. The cartoonish art style is appealing to the eye, the music brings a bouncy, light soundtrack to the events as they unfold throughout the game, and the storyline is both unusual and downright silly, all of which really appeal to me as a casual gamer.

Three hours of wobbling, awkward, frustrating hilarity ensued and I cannot remember a time that I have enjoyed a simple, local multiplayer game as much as I did Octodad: Dadliest Catch. The game is just perfect to sit in your living room playing it with your housemates, taking a shot of cheap, supermarket-own-brand spirits every time anyone does anything stupid and feeling the hours just fly by. The best part about that, however, is that the more you drink, the more difficult it becomes to control Octodad, thus generating a spiral of inebriated octopus-themed failure and limb-flailing hilarity. (Disclaimer: Octodad wants you to drink in moderation. He didn’t get to where he is today by being irresponsible.)

Octodad is by far one of my favourite local multiplayer games, alongside Castle Crashers, every single LEGO videogame title, and BattleBlock Theater, and the party mode only makes it better. It’s chaotic, entertaining, and downright ridiculous in both its writing and its gameplay, making you laugh, swear, and want more and more of the multi-limbed protagonist. As to whether I’d play it on my own, I’d probably decline other than for collecting the achievements that are connected to it, as the game really comes into its own in a multiplayer setting. The game is very much a multiplayer game, so I feel a lot would be lost if I played on my own. In short, Octodad will become a mainstay in my local multiplayer toolbox, and will be for many years to come.