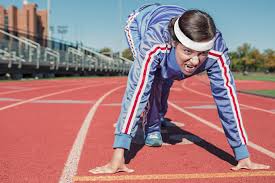 By Luke Brown
May 1, 2015
Posted in Sport, University Sport

Oh dear, this doesn’t look very much like revision, does it now? What are you doing reading a copy of the Boar, when you’ve got work you could be agitatedly pouring over? That 2:2 isn’t going to disappointingly scrape itself, you know. That job with an investment banking firm isn’t just going to drop into your pinstriped lap: not without some serious legwork on your part. Term Three is a time for deadlines and stress-induced receding hairlines; for atrocious diets and an even more atrocious social life. It’s a time of caffeine crashes, shit sleep and utter, utter unhealthiness. Isn’t it?

(Well, fortunately for both yourself and the structure of this article…) No- the answer is no! In fact, it’s really important that you have some other things to focus on in your third term. Things to look forward to when you get out of bed in the morning. Things that make you all warm and fuzzy inside. Because, let’s be honest, it’s not healthy to constantly dwell on how you’ve not put enough work into your degree this year, which is kind of a problem when you think it’s essentially going to define your life, and you even had to pay thirty grand for the bloody thing. It’s not healthy to feel guilt’s cold, invasive fingers wriggling around your backside every time you go for a drink in Spoons or sit in the sun with your pals. It’s not healthy to constantly see the tired, disappointed face of your Dad everywhere you look, to repeatedly hear the light sobs of your Mother as you finally concede to her that, no, there’s no need to buy a ticket to Graduation this year.

That 2:2 isn’t going to disappointingly scrape itself, you know. That job with an investment banking firm isn’t just going to drop into your pinstriped lap

None of that’s healthy. I, urm, imagine. So what can you do to alleviate those Term Three jitters, and to keep you feeling cool over the next few weeks? The answer is, of course, SPORT! Naturally I’m obliged to write that as this article is being published in the Sports section of the newspaper, but it’s honestly true. Lots of intelligent people have basically said as much. The Sport England website, for example, lists that keeping active is effective in reducing nasty things such as “Depression, Anxiety, Psychological Distress and Emotional Disturbance”. Meanwhile, a recent study conducted by the University of Western Australia proved that sport and physical activity “leads to an enhancement of cognitive functioning”. Which means your brain gets bigger, basically. And who doesn’t want a bigger brain? They’re this season’s must have accessory.

And, as luck would have it, there’s loads going on in the next few weeks that you can get your Red Bull stained teeth into. A series of intra-mural leagues get underway by Week 3, in sports such as football, cricket, netball and touch rugby. Just make sure you’ve registered on the Warwick Sport website by the end of Week 2 to take part. Warwick Sport’s popular UV Sport (just think chilled out people playing badminton on the set of Ridley Scott’s Blade Runner sort of vibe) also makes a welcome return this term, as do the Rock Up and Play sessions. These offer sport in a non-committed environment, where you simply rock up and play. That’s why they’re called the Rock Up and Play sessions.

As luck would have it, there’s loads going on in the next few weeks that you can get your Red Bull stained teeth into.

The Running Grid challenge is also back for business, and began on the 27th April and will continue until the 11th May. But there’s also so much else you can do: why not take out a gym membership either on campus or in Leam, for example? That way you can take your mind off of exams whilst also sculpting the kind of hot rig that would have schmucks like Ryan Gosling and Emilia Clarke weeping salty tears of envy. If you’re pressed for cash, just grab some mates together and kick a ball around outside Rootes, or have an impromptu yoga session in Jephson Gardens. It really doesn’t matter. As long as you take some time out of your day to relax and keep active. All the best in whatever you choose to do, and all the best for exams.