At the beginning of this year, as part of The Boar’s 1080p Gaming Resolutions, I pledged that I would dig through my seemingly ever-expanding collection of Steam games and finally get around to playing this Bioshock game that everyone had been going on and on about. It had been increasingly never-ending list of games to play for some time now, and there it remained for years. About six weeks ago, I finally gathered up the motivation I needed and finally got around to taking the plunge into the murky, atmospheric, darkly twisted depths of the underwater city of Rapture and, believe me, I was not disappointed.

[divider]
The very first thing that hits you as you enter into this alien, underwater world, is the sense of creeping claustrophobia. The closeness of the game’s characters and the often labyrinthine structure of the rooms you enter into create a hugely entertaining and almost unbearably suspenseful gaming experience. Every humanoid genetic abomination that you kill, every puzzle you solve, and every step that you take keeps you poised on the very edge of your seat as you navigate the hostile environment that Rapture throws your way. The rooms are dark, the music is dramatic and suspenseful, and the encounters are frantic and chaotic. The back story is juicy and full of flavour, bringing new life to the Rapture setting and causing the player to question every decision they make as they navigate its halls. My god, I really do love this game. 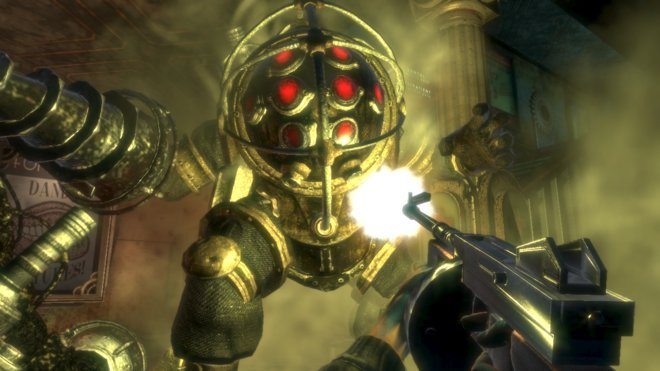 May I be the first to say, that the game has aged very well indeed, considering that it is now over five years old. Granted, my gaming PC is not built to the highest specs available, but the game seems to run relatively smoothly on my machine. The huge seascapes of Rapture led me to drop my jaw in awe as I explored every dark corner I was presented with, and I immediately fell in love with the construction of this game. Everything from throwing fireballs across the corridors of Rapture’s varied structures to thumping hulking, disgusting monsters over the head with a trusted monkey wrench brings an amazing sense of excitement and wonder at the world that Bioshock inspires. For years now, I’ve been in love with dystopian, post-apocalyptic games that force you to fight against the forces of evil, scavenge all the supplies you can, and then maybe, just maybe, get out alive, and Bioshock fits into this category perfectly.

I’m glad I finally blew off the metaphorical dust from the metaphorical case of my Bioshock game and finally took the plunge into Rapture. The visuals and are stunning, the voice acting is engaging and creepy, and the gameplay ranges from quiet sneaking to frantic firefights in what is quickly becoming one of my top ten games. I cannot wait until I’m able to return to Rapture again and continue with what has already been a gaming experience with more twists and turns than an eighties-themed disco night. This game has awoken the trigger-happy, monster-hunting, scavenging survivalist in me and I look forward to what else the game has to offer. From here on in, I’m going to be checking every chest, drawer, and wardrobe for supplies and praying that I don’t come across any Big Daddies any time soon.