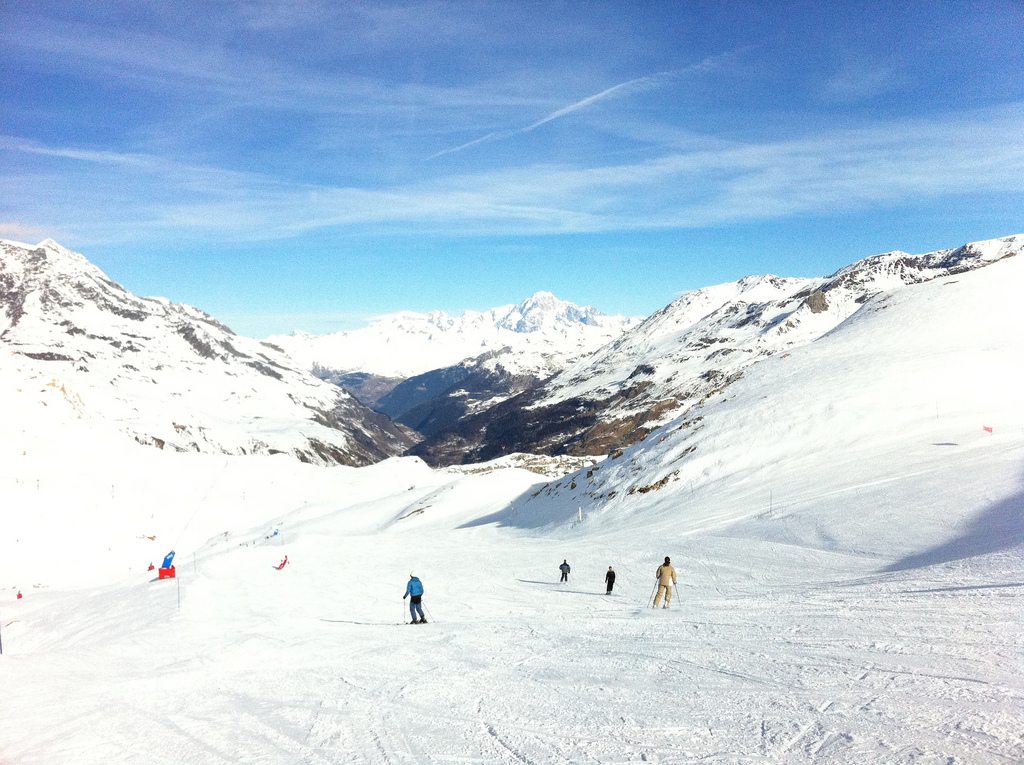 Standing right at the top of a glacier and looking down what was probably the smallest nursery hill ever at the top of it, I remember thinking: “…And why would I want to slide down an icy slope with only two strips of metal strapped to my feet?”

I mean, let’s be honest. The very notion of skiing is just absolutely ridiculous. First of all, you’re chucked into one of the most dangerous environments there is. It’s at a temperature below freezing (yes, it even reached -13 degrees Celsius at one point), there are often blizzards, you’re at risk of developing severe frostbite if you don’t wear enough thermals, the altitude is pretty high (my asthma really thanked me for that one), and if you step on a bit of ice in the wrong way then well, you’re shipped off to A&E faster than a pint of purple gets downed at circle.

So why on earth would I want to try and slide on a bit of ice when I can barely step on it without having to go to hospital? It’s fun, apparently. It certainly didn’t feel it when I had to bundle myself in more clothing than is in your nan’s wardrobe, stuff my head into a helmet where I could barely hear anything and shove my feet into what usually ended up being two blocks of ice. And what are those poles even for, anyway?

It’s at a temperature below freezing (yes, it even reached -13 degrees Celsius at one point), there are often blizzards, you’re at risk of developing severe frostbite if you don’t wear enough thermals.

Oh, ski boots. How I do not miss thee. They were seriously awkward to walk in and made my legs more full of bruises than normal skin, and ended up super painful by the end of the day. Probably because I had to walk for what felt like miles to get up to the top of the frigging glacier in the first place. And still stood at one of the highest points in Val d’Isere, France, I was wondering whether I could actually be bothered to ski down to the bottom of it, because I’d only have to climb back up to the top again. And that’s a lot of effort. Especially on a lingering Après Ski hangover.

But anyway, I’d paid for this entire trip so I kind of had to be bothered, really. I lifted my heavy, long feet and prepared for the slide down the hill. Until my instructor, a bonkers French guy with a face probably more tanned than the rest of his body, grabbed my arm and said: “No, you no ski down. Before you ski down, you ski up!”

I glanced at my friends, also on the beginner course, and realised that everyone was slowly attempting to climb up the hill on the edges of their skis. After a few attempts, I discovered that not only does it take you a full ten minutes to move about a metre, but is also stupidly exhausting

I discovered that not only does it take you a full ten minutes to move about a metre, but is also stupidly exhausting.

As you can guess, if I was terrible at climbing up a hill, I was even worse at getting down it. We were taught the most basic move, called the snowplough, where according to my instructor you “open your legs like pizza slice” to stop. Problem is, I usually couldn’t stop. But still, I wasn’t deterred from attempting the green (beginner) slope at the end of my lesson… which resulted in me falling halfway down the slope on my bum, struggling to hoick myself back up and thinking “never, ever again”. After my first day I felt like I wanted to cry; how could I ever get down that slope without crashing and burning horrendously?

The thing is, if you want to get good at skiing, you need to get acquainted with your buttocks – and fast. The tip to conquering the sport revolves around losing the fear of falling, and being prepared to receive a few bruises in the nether regions. After that first horrific experience I learned that crashing isn’t too bad after all: there’s always someone around on the slopes to help you get back up again.

And from that moment on, my skiing actually improved. When we started learning how to turn the next day too (by applying pressure on each ski) I discovered that I could actually go around corners to the next part of the course, as opposed to accidentally going off-piste every time. And only once did my instructor have to drag me down the mountain when I was too hungover to move myself.

One of the highlights of my skiing adventure had to be when I fell over at the top of a treacherous blue (novice) slope, sliding all the way to the bottom and leaving my skis and poles at the top. I later found out that this (incorrect) technique is humorously called a “yard sale” – not so hilarious when you’re sat at the bottom of a ski slope wondering how the hell to get your stuff back. Luckily, a crazy OAP rescued my severely scratched kit and helped me click my skis back into place, sharing a piece of advice that some Norwegian guy gave him back in 1969: “Never turn your back on the slope.”

But actually, after the hangover subsided, the constant squat-ache in my thighs went away and the bruises faded, I decided I had a pretty fun time skiing.

Well, I’m not sure whether that particular nugget of wisdom really helped me because after a week of skiing, I wanted to run as far away from the slopes as I possibly could. But actually, after the hangover subsided, the constant squat-ache in my thighs went away and the bruises faded, I decided I had a pretty fun time skiing. By the end of the week I was attempting red (intermediate) runs and trying my hand at parallel skiing – and the adrenaline rush you get when you are brave enough to go really fast is like nothing else you could ever experience. One day I’d love to go again. But perhaps when the nightmare of falling off a ski lift for the hundredth time has stopped recurring.