A farewell message from some of your editors…

I remember thinking back to the first Boar social I ever attended. We went to the Dirty Duck for drinks. The editors were sat in the middle of the circle, chatting to everyone, laughing casually and confidently, talking of things they knew about university. Which to a tiny fresher like me, seemed like everything.

Speaking to our newly-elected deputy editor Bethan the other night, I realised at the beginning of this year, she’d seen me in exactly the same light. Sian Elvin, from fresher to finalist, writer to editor, ignorant to the font of all knowledge. Really?

And this shows that not only has the Boar given me some shining career prospects, but shaped me as a person. Sure, I can use InDesign, write a news report and give an interview. But it’s more than skills on paper. I can speak to anyone; get out of a sticky situation; believe in my own abilities. And I’ve made a tonne of lifelong friends to boot.

A bit late to the Boar game than most, my first article was published at the end of my first year. It was a review of the first season of House of Cards and Netfilx’s all-at-once distribution (at one time considered controversial). Of course, I took the show too seriously and machievalli-ed my way into this newspaper.

Two years gone now and knowing that I’ll never hear the words Nigel Thrift, University construction, and U1 may break me – so much that ten years down the line a combination of those words may trigger an uncontrollable urge to assassinate the Prime Minister of Malaysia.

Subliminal brainwashing aside, I’ve had the chance to work with some really amazing writers, editors, designers, photographers, coders, businessers, all of which work incredibly hard to make the Boar pretty fucking great.

Unlike most editors here who’ve found replacements, I’ve had no such luck yet. So I’ll sign off with the Boar’s first classified. WANTED: one deputy editor who wants to do dope shit, with dope people.
[divider] 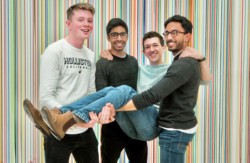 Reflecting on a year of courting controversy