The Shock of the Fall by Nathan Filer (Review)

[dropcap]T[/dropcap]he Shock of the Fall, the award-winning debut novel from mental health researcher turned author, Nathan Filer, deals with the nature of mental illness in such a bittersweet and heartfelt way that it has stuck with me ever since I finished it a few weeks ago. After being awarded the Costa Book Award in 2013 and the Betty Trask Prize in 2014, the novel has been met by widespread critical acclaim from both literary critics and psychologists alike, with reviewer Suzi Feay describing it as ‘a gripping and exhilarating read’. This is one of those novels that – for me at least, and I imagine for many more besides – will make the struggles of its protagonist Michael Holmes stick with you for quite some time after reaching the final page.

The Shock of the Fall intertwines themes of grief, mental illness, independence and family 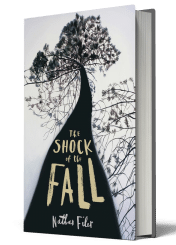 The novel portrays one family’s reaction to the loss of a family member, and Matthew’s struggles with  schizophrenia and becoming independent. Filer explores events, both past and present, in a purposefully ambiguous and sometimes disorientating narrative style. The narrative also follows Matthew’s experiences of grief, guilt and, ultimately, the issues that can be found within our current system of mental health care. Filer uses his own experiences of working within mental health institutions throughout his life to create novel that is both touching and personal in the way it deals with the often-debilitating nature of mental illness.

Filer’s choice of perspective leads to some very interesting exploration of the emotionally challenging nature of mental illness, and the deep-rooted issues that the experience of grief can leave a person with:

“There was the shock of the fall and the blood on my knee, and Simon carried me all the way back to the caravan, all by himself, without any help from anyone, even though it half killed him, but he did it anyway, he did it for me, because he loved me.”

The author’s somewhat fragmented narrative style, and the often ambiguous accounts of events that transpired throughout the novel, all serve to provide a poignant picture of the struggles of living with mental illness and, in many ways, contributes greatly to the wider social narratives that surround mental illness today. At a time when there exist a number of movements aimed to expel the social stigmas and stereotypes commonly associated with mental illness, Nathan Filer utilises first-hand experience of mental health to create a novel that raises some very important issues concerning the nature of mental illness itself. The experiences and struggles of Matthew Holmes, both past and present, underpin some very emotionally challenging issues that Nathan Filer deals with both sensitively and gracefully within The Shock of the Fall:

“If I were more perceptive, if my senses weren’t so blunted by the medicine, I’d be better able to decipher, understand what he meant by the movement of the leaves, or the sideways glances of patients as we sucked endlessly at cigarettes.” 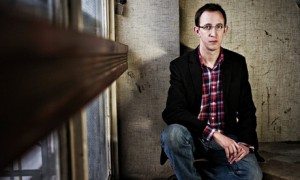 The frequent reference to the medicine that Matthew Holmes has to take throughout the novel, and the disjointed and frantic tone of the sections wherein he misses or refuses to take his medication, create a strong sense of tension and of personal struggle that highlights Filer’s skill as an author in dealing with some very hard-hitting issues. Although, if I was to make one criticism of the novel, it does seem to leave readers guessing over a lot of the central events. However, this only serves to improve the overall effect that Filer no doubt intended of creating the narrative of ‘unreliability’ which this causes in many of the chapters.

Overall, The Shock of the Fall provides an experience that I have not had in a novel for a very, very long time. It deals delicately and emotionally with the nature of mental illness through a disjointed recollection of events both past and present, and the exploration of familial bonds in the face of great adversity. The trials and tribulations of Matthew Holmes seem so personal and real throughout the novel that some of the chapters are simply heart-wrenching to read. In my opinion, The Shock of the Fall is a very impressive feat of writing, and I hope to keep one eye open for any future works Nathan Filer might produce.