Fencing is a sport that everyone should try (note: that's not me). Photo: fencing.bc.ca

It’s week three: the honeymoon period is officially over. If you’re a fresher, you’ve realised that university doesn’t solely consist of going out every night, and that getting with your flatmate- which seemed like such a good idea after four cans of K cider- really wasn’t your smartest move. If you’re a second or third year, you’ve abandoned that early term pretence that you’re going to go to every seminar and read everything on the recommended reading list, and you’ve sunk back into that tiring, monotonous U1 slog.

But stay calm, for not all hope is lost. Fortunately for you, something called the Warwick Fencing Club exists, and it lets you take all of your wordly frustrations out by trying to smack a stranger with a metal sword. Of course, there is more to it than that (as I was to learn in earnest) and the strong social aspect of the club means that you may even make some new friends too.

I went along to an introductory session at the fencing club last Tuesday evening, aimed at those who had never tried the sport before. Earlier that day, my bus had to wait by those temporary traffic lights near campus for about twenty minutes, and midway through the afternoon I realised I’d forgotten to bring in my gym bag. Believe me, I was pumped to seriously smack some strangers.

But it was impossible not to be drawn in by the friendly atmosphere of the club. Often you can be made to feel a little isolated at an introductory club session, after all, you have no idea what you’re doing or who anyone is, but the fencing exec were really engaging and the club armourer, David Ray, came straight over to say hello.

David told me that the swords were all tipped, which came as a bit of a relief as, walking into the hall, I was greeted with the scene of two guys fighting at an absolutely ridiculous high pace. He also explained that the club provides beginners with absolutely all the equipment and specialist clothing you need to enjoy the sport. Which was good, as- sans bag- I’d had to go along in my jeans and jumper, which made me look even more conspicuous.

You actually have to wear quite a lot of protective gear when fencing, which is sort of unsurprising, given the fact that the sport entirely revolves around attacking another person with a sword. The first part of the session was a quick run-through on what you had to wear and, crucially, how to put it on. Jackets, plastrons, gloves and chest protectors were all provided. Oh, and you get a helmet, of course. You feel so cool when you first put it on, like you belong in a Tron movie or something. The jeans ruined the overall look a little bit, to be fair, but after getting fully kitted up you feel pretty fly.

Afterwards, we got down to some basic footwork with the club coach, and all-round nice-guy, Peter Cormack. Peter told me that he’s worked with the club for 13 years, and used to be a regular on the senior circuit. To begin the session, he told us to form a line and to practice some basic footwork. Doing a funny walk up and down the games hall without a sword makes you feel pretty silly, but you realise how crucial getting your footwork right is when you actually get your hands on one of the swords, called ‘foils’. Practicing the basic movements before rushing into getting to grips with the foil was really helpful, and you gain a better appreciation of just how varied a sport fencing is.

Moving onto some basic exercises with the weapon, everybody had to find themselves a partner, and then practice lunging at them with the sword, and hitting them in the middle of their chest. The first time someone moves towards you waving a blade in your direction is a pretty nerve-racking experience, but I promise that actually getting hit by the thing genuinely doesn’t hurt that much.

When fencing with foils, one of three types of swords used in the sport, points are scored by achieving a direct hit on your opponent’s torso. So this exercise stood us in good stead for the practice fights that concluded the session.

After that, Peter taught us the basics of parrying. In pairs, we took it in turns to deflect one another’s attacks, before lunging in to strike on the counter. It looked really simple when Peter demonstrated the action, but watching your opponent whilst maintaining the right blade action, and intently focusing on your footwork the whole time, proved really tough.

After getting hit in the head, I can testify the Tron helmets do a good job in keeping you alive

Trying to get all of these things right simultaneously reminded me of dancing in a way, albeit in the classical sense of the word rather than the gyration-heavy shapes you bang out in Smack. Every movement has to be precise, as one wrong step throws your balance out and makes you vulnerable to the attack of your opponent.

That said, when the practice fights started, all thoughts of precision went out the window. Everything Peter and the exec members had diligently taught me over the previous hour was quickly forgotten as myself, and the other panicked beginners, swung our swords at one another like we were over-enthusiastic extras from a Lord of the Rings movie.

Slowly though, over the course of about three of these mini fights, we improved, and in my last fight I actually had a really cool exchange with my opponent which saw us both make successful parries- improvement indeed. I also slipped in that fight and got hit over the head, which was less cool. Fortunately, I can testify that the Tron helmets do a good job in keeping you alive.

The helmets also do a good job of practically boiling your brain, and people were mopping some seriously sweaty brows after the taster session had come to an end. The level of fitness required for fencing- both physical and mental- is deceptively high: when you’re fighting someone you’re constantly on the balls of your feet, edging backwards and forwards, trying to pick the right moment to strike. 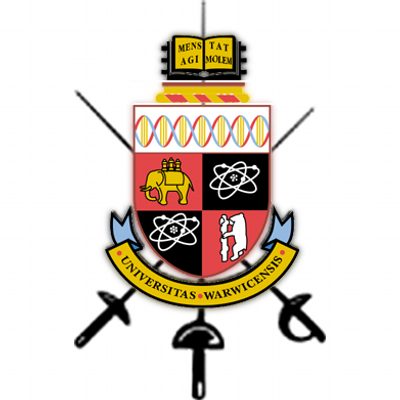 Peter brought the session to an end with some closing remarks about the beginner’s course that he offers newcomers during the first term, and Marjorie Adriaens, the club’s Novice Representative, also spoke a little bit about something called the National Novices. This is the biggest university novice foil competition in the entire country, and it’s hosted right here at Warwick. The opportunities to learn the sport quickly, and thoroughly, really are incredible. It’s also very exciting that you can actually find yourself representing the Uni as a beginner, against people who are at a similar level to you.

The very fact that the club have a specialist member of the exec who represents novices, demonstrates first-hand the intention of the Fencing club to bring new members through the ranks. It’s also very reassuring to know that you’ll be learning a sport within a big group of new people, and not on your own or in a very small, marginalised set.

The club president, Martyna Grzesiak, was also on hand to answer questions and give people some practical advice, furthering the friendly reputation of the club. Socials were also discussed before everyone shot off. Interestingly, circling wasn’t mentioned, but the club all headed off to the pub after the session, and were planning a bar crawl for the week ahead. Definitely food for thought if you’re interested in taking up a sport here at Warwick, but you’re a bit intimidated by circling at Pop! every week.

To be honest, I would never have tried fencing in a million years if it wasn’t for this article, and I kind of had a pre-conception that it might be full of uberposh people who had fenced from the age of three for their private schools. Needless to say I was completely wrong, and I was really struck by just how well the club balanced serious training and a sustained commitment to competition, with their genuine sense of warmth and inclusivity.

If you fancy trying a sport that is as mentally challenging as it is physical, and you also happen to be eager for quick progression, then the fencing club should certainly be on your radar.