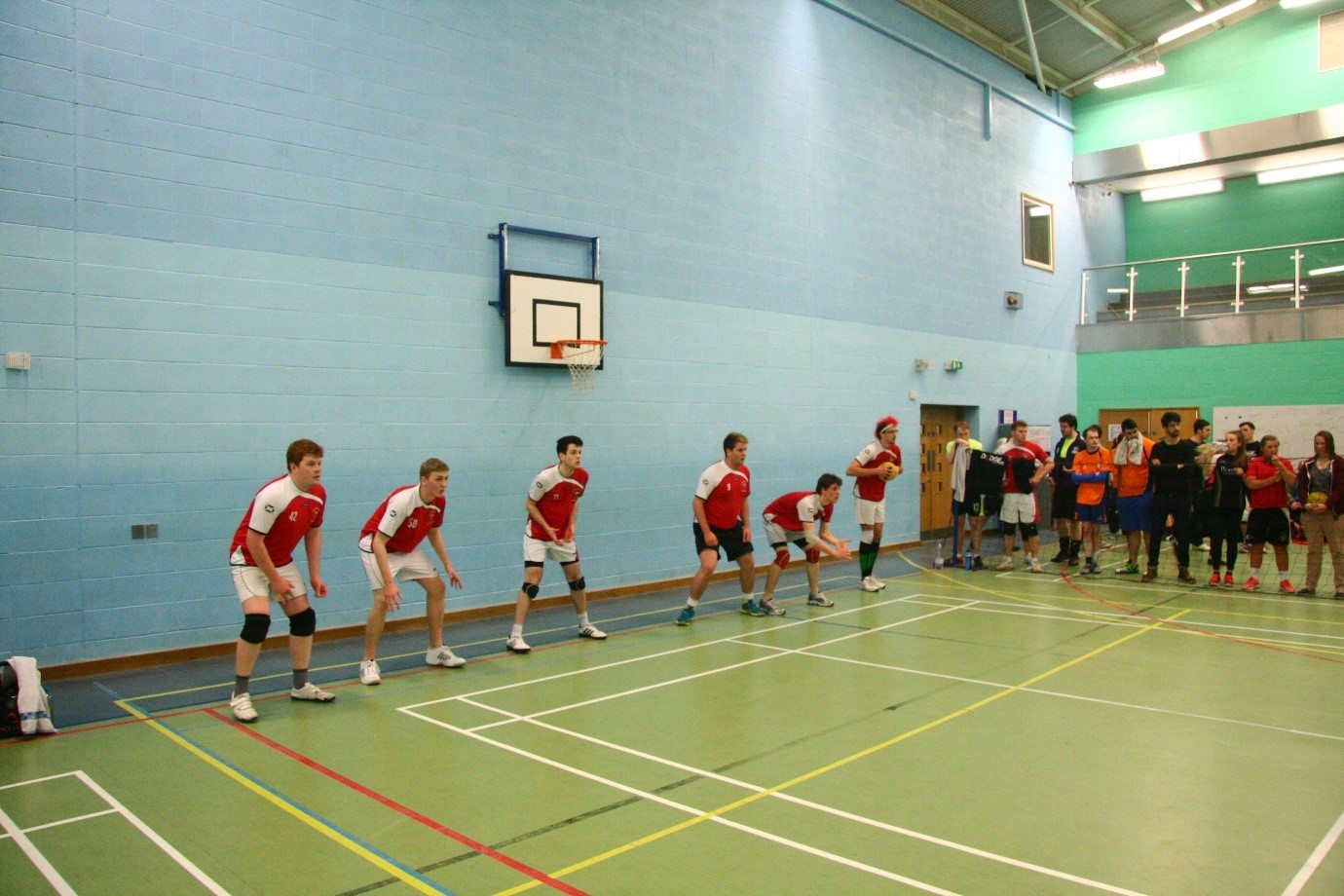 By Oliver Hopkins
May 24, 2014
Posted in Sport, University Sport

Oliver Hopkins documents the progress of the Warwick Warriors Dodgeball team in the 2013/14 Premier League season, in a comprehensive and amusingly offbeat style for Boar Sport.

The 20th of October saw the eagerly awaited return of the Dodgeball Premier League. ‘Dodgeball has a Premier League?’ you ask with astonishment upon your lips. Indeed it does, and its competitors are no less committed and the rivalries no less fierce than you might find on a football pitch.

The Warwick Warriors donned their crimson shirts and set about the task that lay ahead: 3 wins from 3 was the least that the boys needed in this first crucial meet. And achieve this they did, narrowly edging a cagey affair with Reepham Raiders 8-6, before dismantling Bullet Dodgers 10-4 and crowning the successful day with a solid 9-5 victory over Balls of Steel.

On the back of these results, Warwick found themselves sitting pretty in second place with 36 points, just 5 points off the current leaders The Dirty Ducks, a team of Warwick graduates, who looked in mightily impressive form.

MVP: Adam Bowditch had an imperious day, his throwing and catching consistent throughout. Against Balls of Steel he was fantastic, twice clawing Warwick back from the brink of defeat with a number of vital catches and powerful throwing.

On paper, the second round of fixtures proposed a far more challenging prospect. The Dirty Ducks, a name lovingly coined from one of Warwick’s finest establishments, were the first opponents for the men’s team. No love was lost between the old friends, and in an intense game, punctuated with close calls and tight finishes, the Ducks prevailed with a somewhat flattering score line of 12-2.

The following game was something that the boys will want to forget quickly as they were put to the sword by the Imperial Wolverines, the boys were bulldozed by the sheer power of the Imperial throwing. The Warriors were scythed down to a humbling 13-1 loss.

These results meant that Warwick’s final game of the day against the Derby Seahawks was an absolute must-win. Some powerful throwing and savvy target selection ensured the Warriors ended the day on a high, sealing a 10-4 victory against Derby. This made the long journey home a little more bearable.

MVP: Tim Day was excellent as captain. He bore the brunt of most of the throwing, but his strength never wavered. Instigating some clever target selection, he masterminded the much needed victory over Derby.

Warwick’s Leicester outing looked set to be their hardest yet. The team were up against the Meteors, the self-proclaimed favourites, as well as five-time National champions the Jammy Dodgers as well as the Bedfordshire Bulls, one of Warwick’s fiercest rivals.

The first game followed the script to a tee: the Warriors were caught cold against a very good Meteors team and fell, with a whimper, to a 13-1 defeat. The less said about that, the better.

Jammy Dodgers were next, a powerful and postulating outfit. They were missing a few key players though, and the men in red smelled the scent of an upset. Unfortunately, Warwick started slowly, losing the first few games. The boys rallied, but were unable to turn the late charge into a victory as they succumbed to a 8-6 defeat.

Once again, two early defeats heaped the pressure on the lads to finish the day off with a win. And once again, the lads prevailed. In arguably their most impressive game of the season so far, The Warriors blitzed through a disheartened Bedfordshire side, crowing the day with a crushing 12-2 win.

MVP: This weekend was a coming-of-age for Ollie Hopkins, the youngest member of the squad. After a steep learning curve, the young pretender is starting to mix it with the big boys. Solid throwing power and a few stunning catches were notable highlights.

Week 4 was a tale of the 8-6’s. The second half of the season saw the fixture list repeated meaning that first up was a rejuvenated Reepham Raiders side, a team who have outperformed all pre-season expectations. Warwick, having been slight favourites in week 1, were now distinctly the underdogs. A steely performance from the men in red saw them edge the contest 8-6, but the match will not be remembered for its score line.

What happened halfway through this game was something out of a fairy tale, an act, so skilful and so monumentally rare that it will be passed down as folklore for generations to come (possibly). Targeted with two balls, Adam Bowditch dropped to his knees and extended both his arms as if baiting the balls towards him. This looked intentional, what we he doing? Surely he was going to get hit? But then, as if pulling them to him with some magnetic force, both balls lodged themselves firmly under either arm.

A double-catch. The rarest of phenomena. To contextualise this, a double-catch shares about the same rarity as a hat-trick in cricket. As if that wasn’t crazy enough, what followed was an absurdity. Bowditch then proceeded to make another double-catch in the following game. Back-to-back double catches – an unprecedented feat. The crowd erupted in raucous cheers, players and spectators looking on agape, unable to comprehend the pandemonium of the situation. This is the stuff legends are made of. Adam Bowditch, I salute you.

The following games slipped by almost without recognition. The Warriors secured a tightly fought 8-6 over Balls of Steel, thanks to a last-second hit from Cameron Panter, and then disappointingly succumbed to an 8-6 defeat against bottom-of-the-table Bullet Dodgers, despite the heroics of Jack Tabner.

MVP: In light of Bowditch’s astounding double-catches, it is testament enough that Jack Tabner was awarded the MVP award. He didn’t put a foot wrong all day, and on numerous occasions he almost single-handedly pulled Warwick from the jaws of defeat. Tabner’s best outing of the year thus far.

In the penultimate round of fixtures, the Warriors set out to right the wrongs that had befallen them in the mirror fixtures of week 2.  They started at a canter, flying out of the blocks against league leaders, The Dirty Ducks. The aura of invincibility that had previously circled the Ducks had faded somewhat, and the Warriors took full advantage of this, racing into an early lead. David Davies set the tone with two outstanding, point-blank catches. The Ducks rallied, their star-studded line up finally waking up to the situation at hand. The Warriors resisted bravely, but narrowly went down 8-6, an admirable score line.

Imperial, who had dished out a 13-1 mauling of Warwick in their previous meeting, did not have such an easy ride this time around. Warwick neutralised the big throwing power of the Imperial wide men, and then ripped into the heart of Imperial’s centre. How the game finished up as a 7-7 draw was hard to comprehend, considering how dominant the Warriors appeared.

Once again, it was Derby who were Warwick’s final opponents. The match was, as expected, a traditionally tight affair, with the lead exchanging hands on several occasions. Warwick managed to edge the match 8-6 meaning that, much to symmetry’s satisfaction, the boys finished the day with a win, a draw, and a loss.

MVP: David Davies, the man mountain, had an absolute stormer. He set the precedent with two huge catches early on in the Dirty Ducks game and never looked back from there. Davies remained a tower of strength for the duration of the day, gleefully plucking any catches that came his way.

As the final day of the season dawned, Warwick found themselves neither in the race for the title, or sucked into the mire of a relegation dogfight. Instead, they were playing for a highly respectable 4th spot which would see them finish as the highest ranked University team in the league. They started against title-contenders, Meteors who, together with the Dirty Ducks, were vying for top spot. In an attempt to aid the Ducks’ title charge, the Warriors were out to spoil the Meteor’s party.

And did so they did. In a seething and somewhat insidious game, Warwick successfully managed to rile up the Meteor outfit, manifesting into an early 5-1 lead. The quality of the Meteor line up dragged them back into contention however, and Warwick left the first game with a respectable 7-7, much to the whooping delight of the Dirty Ducks.

Second up were the Bedfordshire Bulls, a team transformed in recent weeks. In a furious flurry of a game, the two teams squared off in another pulsating 7-7 draw. Warwick president, Iain Barrett was the star of the show. He cut an imposing and intimidating figure at the front of the court, triumphing over his rivals on numerous occasions.

The Warriors’ final game of the 13/14 season was against the Jammy Dodgers. A win here would secure a 4th place finish. Alas, a dream top 4 finish wasn’t to be, as the Warriors slumped to a disappointing 12-2 defeat. It was an unfortunate way to finish what has been a marvellous DPL season. Congratulations must be given to Meteors, who stayed consistent throughout the day to beat the Dirty Ducks to the title crown and to pull the curtain down on what has been a thrilling and thoroughly entertaining season.

MVP: It seemed apt that Iain Barrett, in his last league match of his illustrious Warwick career, should finish on such a high. With deadly lethality, he bound around the court like a man possessed, pulling off some extraordinary plays. As he has done for the whole of the season, he spearheaded much of the team’s success and will be sorely missed next season. 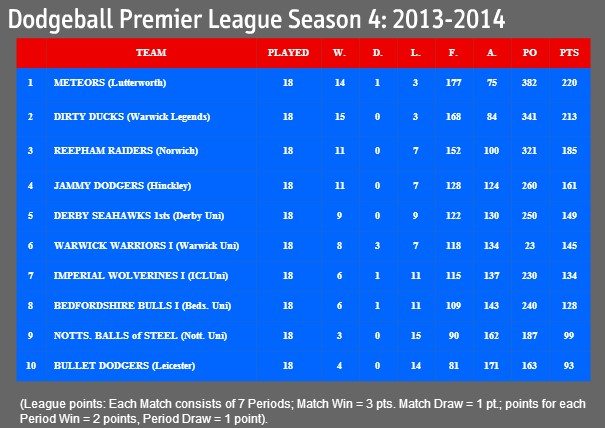 The final league table of the 2013/14 season. Photo: Oliver Hopkins.