If you thought that the coalition government’s decision to raise tuition fees to £9,000 made university a consumerist product rather than a reward for academic achievement, then you will not enjoy reading this. As the UCAS deadline looms, it has been revealed that institutions are offering students financial and material rewards for selecting them as their ‘firm’ choice on the application form.

The Daily Telegraph revealed last week that Newman University in Birmingham are offering students with BBB grades £10,000 over three years if they make them their firm choice. Meanwhile, Newcastle University’s school of electrical and electronic engineering is providing a free laptop plus £2,000 per year for students with AAB grades. There are several others making similar offers. At first, it seems innovative and exciting. You can picture students’ eyes lighting up in glee, understandably allured by material gains. But it is disheartening to see universities reduced to flagrant bribing to sway one of the most important decisions of young students’ lives.

Financial and material temptation simply widens the gulf between rich and poor, because it will, most likely, be the rich who are considering these offers.

I’d like to think that more rigorous criteria – academic reputation, sporting facilities and quality of social life – might be more important. More dangerously, though, this trend is straying perilously close to the murky and treacherous waters of elitism. The brightest and best students are normally the ones who get the better grades: simple research proves this. Financial and material temptation simply widens the gulf between rich and poor, because it will, most likely, be the rich who are considering these offers. Would a less well-off student choose Newman University ahead of, say, University College London because of the obvious financial discrepancy? In the short term, it might be seen as a prudent move. In the long term, it might be seen as an opportunity missed. I like to think that universities would be striving to recruit the best professors, to drive standards up in order to achieve their goal of increasing intake.

Instead, there is an air of lazy consumerism surrounding recruitment, which will surely proliferate attitudes amongst students. When I was going through the nerve wracking process of applying for university, my mind was a little more malleable than it might have been: I was 17, after all. Pound notes may have overtaken grades in priority. When Rachel Wenstone, the vice-president of the National Union of Students, called the trend an example of “shallow marketing gimmicks”, she hit the nail on the head with an emphatic flourish. I just hope students aren’t duped by the ostensible glamour of free money and a laptop. Their futures are too important for that. 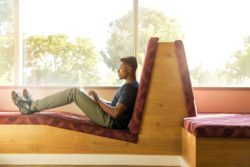 Why the unconditional offer should not be looked down on