Lily isn’t quite silly but Thicke is quite…thick

Last November, I came across an article featuring on the Metro Online entitled ‘Lily Allen has a baggy p***y’. Concerned both for Lily’s physical welfare and undeniably curious as to how this information came to be of public knowledge I followed the link which led me to the single that I had been waiting for. Hard Out Here, released November 17th, has easily made itself one of the most necessary songs and videos of our era – addressing, without reservation, the increasingly limited and increasingly dictating images of women churned out by the mass media.

80 percent of women claimed to feel insecure after using some form of media in a study by People Magazine. A report by the Home Office showed that media pressure has made some schoolgirls feel it’s necessary to behave as sex objects to get attention from boys. These facts aren’t new, nor are they very shocking considering the magnitude at which we are bombarded opinions as to how we should look, act and think.

Somehow woman-on-woman and man-on-woman body shaming has become a trending pastime and I’m still struggling to understand the spectrum on which I should measure myself as a ‘prude’ or a ‘slut’. One of my main aggravations regarding representations in the media, beyond the countless magazine articles telling me why a new diet plan and/or makeover is the ‘answer to all my problems’, is the sexual objectification of women in the entertainment industry.

It was the sexual revolution of the 1960s that provided the opportunity for women in the West to take the helm with their sexuality. It was greatly influenced by the invention of the Combined Contraceptive Pill in 1961. The Pill gave women the chance to control their fertility, detaching the act of sex from being a means of reproduction and enabling it to exist purely as a method of expressing affection or gaining physical pleasure.

Without this groundbreaking revolution there would be no entertainingly awkward sexual encounters brought to us by Girls’ writer Lena Dunham and Miley would never grace us with her twerking technique. But one can’t help but feel that this well-deserved liberation has been taken advantage of by the industry and exploited in a way that attempts to justify the sexual objectification of women, an idea that Allen portrays in her tongue-in-cheek depiction with her bluntly-critical lyrics juxtaposed against slow motion close ups of professional booty-poppers doused in champagne. 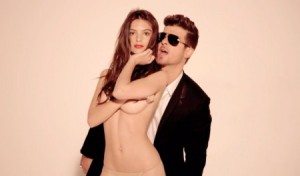 One of the most blatant and highly discussed examples of this is Robin Thicke’s five weeks at Number-1 single, Blurred Lines, parodied by Allen with a beautifully composed balloon display. The single was fittingly matched with a provocative music video featuring stunning yet scantily clad (topless for all you late night viewers) models. Over the autumn term alone, the song had been banned by over 20 student unions including the University of Leeds, Birmingham and Nottingham due to its disturbing lyrics.

Whilst undeniably catchy, the underlying message to the song’s hook clearly promotes the encouragement of an already established rape-culture in which it is considered ‘okay’ to take advantage or forcibly coerce a woman into sexual activity because of the way she may be dressed or present herself. Thicke ‘know[s] she wants it’ even though her actions say otherwise, indicating that there are apparent ‘blurred lines’ between giving and not giving consent.

It is media products like Blurred Lines that highlight how imperative it is that we as a collective take a stand against the normalisation of the degradation of women as I personally don’t look forward to the idea that my seven-year-old niece may grow up in a world where she is expected to be complicit with it.

Nevertheless, I’m not saying that Allen’s approach is perfection, the casting of mainly black models as her provocative back up dancers is questionable if not offensive and completely ignores the existence of the link between race and sexism. However, it is undoubtedly a stepping stone on our route to reclaiming our right to equal representation. Here’s hoping 2014 brings us more fierce and fearless strikes at breaking the glass ceiling separating us from true equality, because if anything’s for certain, in the current climate, it’s that it’s hard out here for a b*tch.