The one-day strike by staff at the University of Warwick on Thursday 31 October has been a major talking point for students across campus this week.

The planned strike is due to disputes over salary and has been organised by Unite, Unison and the University and College Union (UCU).

An official picket  line was set up outside the Security Gatehouse on the outskirts of campus. A group of students stood in solidarity with striking staff outside the Humanities building and attempted to persuade students away from attending their lectures and seminars.

Dan Ayres, a second-year Philosophy, Politics and Economics undergraduate, reported that he “saw a crowd of protesters waiting at the bus stop, as well as outside the Humanities building.

“This would probably be quite intimidating for some students. I just think those on strike need to know who they are striking against, because intimidating students won’t get them anywhere.

“I don’t understand what they are trying to achieve by standing in the road.”

In an interview with the Boar on Tuesday 29 October, vice-chancellor of Warwick University, Nigel Thrift, was asked about his stance on the strike, to which he responded: “The strike is a result of national pay bargaining and is part of a national process. Warwick is one actor in that process.

“The University’s job is very straightforward: to keep as many things going as it can… the reason being because the University is about giving a service to students.”

The UCU spoke to the Boar about their reasons for striking here.

Many have also been tweeting about the strike:

@BoarNews Two lectures cancelled, at least he let us know before! #liein

The clock strikes midnight, the STRIKE begins. Solidarity to all staff striking today and students occupying in support #fairpayinHE #RISE

Here's the picket line outside @warwickuni as members of 3 unions strike in a row over pay. pic.twitter.com/emZSRCMpfW

Some have even claimed that tutors were trying to stop their cars as they drove onto campus.

Dr David Webber, a Politics and International Studies teaching fellow at the University, sent a statement to his undergraduate students explaining his choice to strike: “I am fully in support of the strike action, and after careful thought and consideration, I have taken the decision to join my colleagues in protesting against the widening wage gap and the cuts in pay that lecturers and teaching staff continue to experience both here in this University and at other institutions across the country…

“As your lecturer and tutor, my chief responsibility is to teach politics and to lead by example. At a very basic level, this means putting you, my students, first, and offering advice and guidance wherever I can and wherever it is needed.

“Aligned to this, I also have a responsibility to demonstrate the practice of politics and political action.”

Numerous students, however, were unaffected by the proceedings, or were even enthused by them.

Fourth-year Engineering student Jonathan Sewell said: “I walked past a picket line outside Humanities on the way to my Engineering classes, but everything was business as usual in my department.”

Joshua Allsopp, a third-year English and Film undergraduate, said: “I was too hungover to care. Not as though I actually planned on going to anything anyway.”

First-year History undergraduate Elizabeth Renfrey was very pleased that her essay deadline was extended as a result of the strike.

The University of Warwick Students’ Union (SU) released a statement of solidarity with teaching staff, as passed at the Student Council on Monday 21 October.

“This Union believes that many of the teaching staff of the University, a large contingent of whom are our own postgraduate students, are not paid adequately for their contribution, and we support them in their campaign for at least a pay increase in line with inflation and for a living wage for everyone in Higher Education.”

Speaking on the Boar O’Clock Weekly radio show at Radio Warwick on Wednesday 30 October, Ben Sundell, president of Warwick SU, commented: “I think it’s useful that we’ve got that kind of mandate from the student body, that was passed by Student Council.

“As a representative body, we can confidently say on behalf of the SU that we’re supporting their aim and supporting the action tomorrow.” 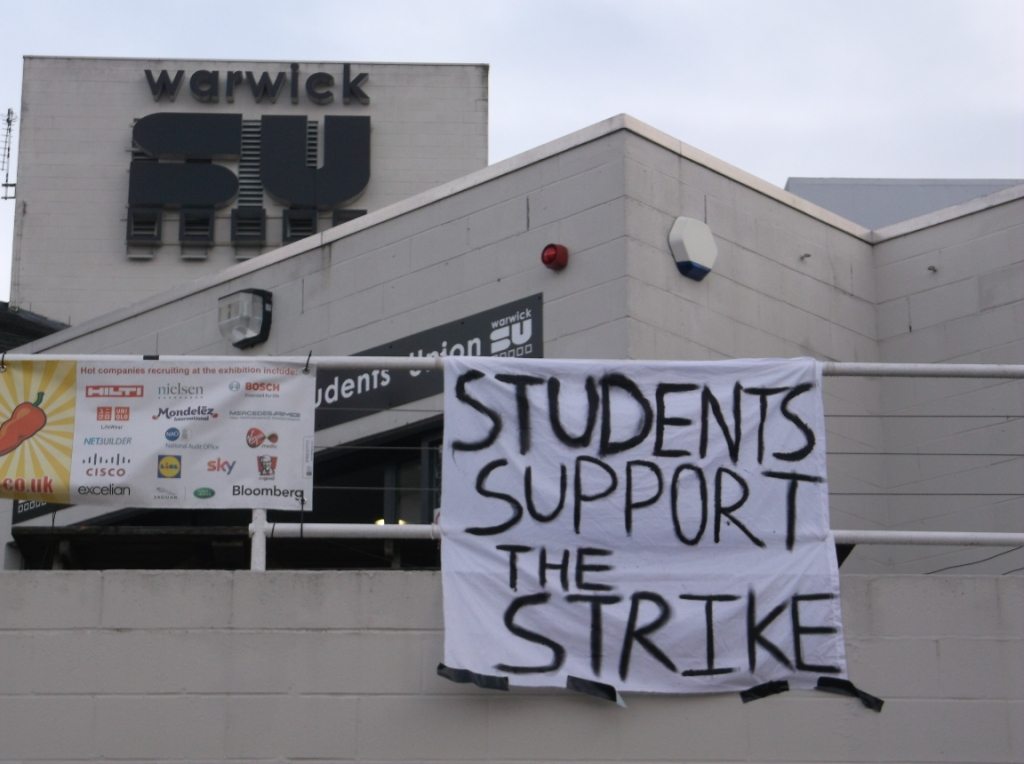 It appears that students at other universities have had similar experiences.

Alexander Shepherd, Computer Science finalist at the University of Southampton, said: “As far as I’m aware, many of our lecturers made efforts to let pupils know if their lectures would be disrupted beforehand, and some even rescheduled their lectures for other days to compensate.

“At the picket lines, students weren’t prevented from getting through if they wanted.

“Apparently someone also produced some unofficial refund forms which they were encouraging students to fill out and send to the vice-chancellor.”

Tansy Wickham-Pusey, a second-year Spanish Studies and English Literature student at Lancaster University, told the Boar: “There were lecturers trying to stop our bus!”

Was your day disrupted by the strike?
Tweet to @BoarNews

A letter of response was published online on Tuesday 5 November. 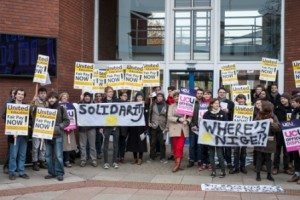 Students strike in solidarity with staff