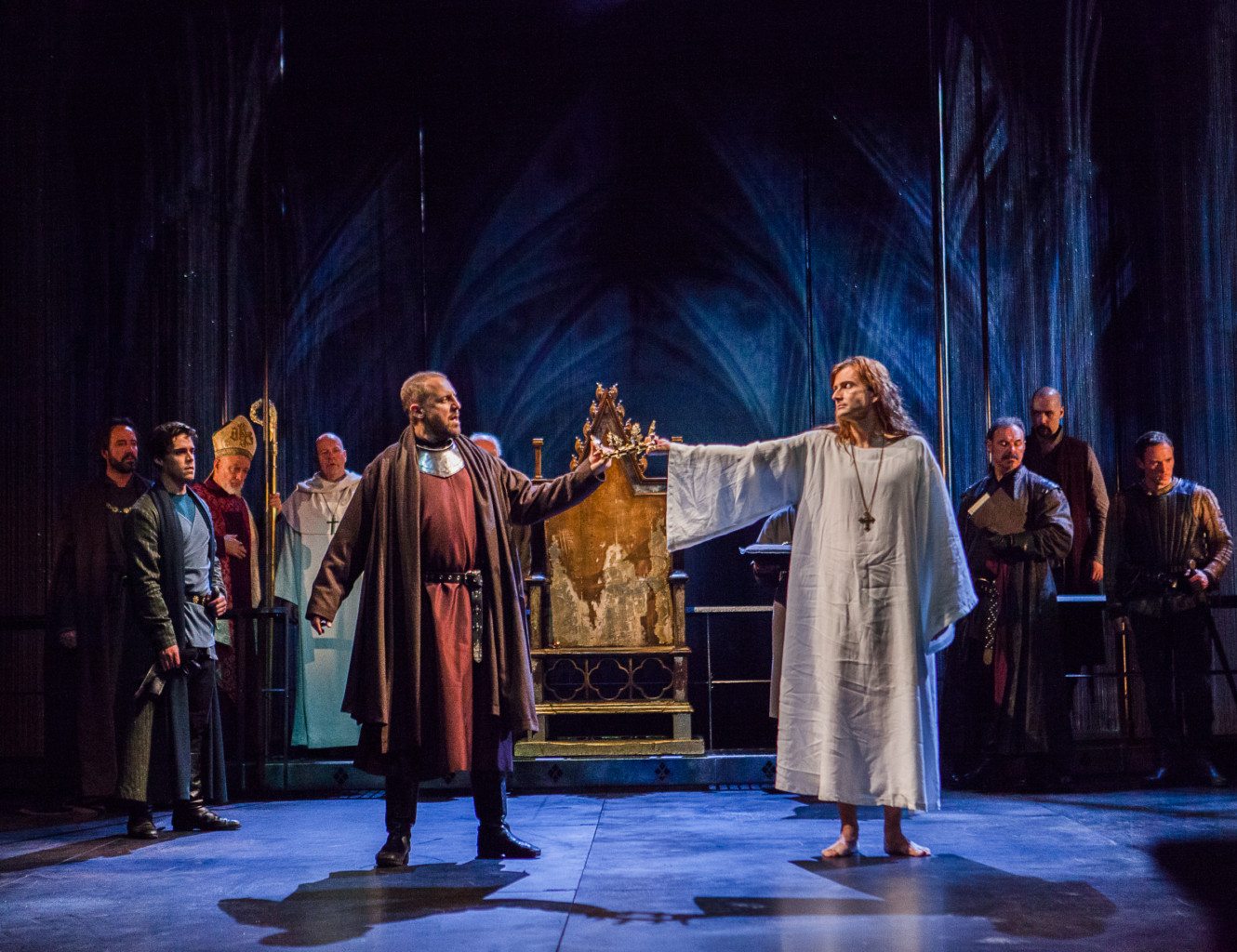 David Tennant and director Gregory Doran are reunited at the RSC for this sell out run of Richard II, after Tennant’s extraordinary performance of Hamlet five years ago. The tragic history play considers the last two years of Richard II’s reign until his death. It moves from the quarrel of Thomas Mowbray (Anthony Byrne) and Henry Bolingbrook (Nigel Lindsay) to their subsequent banishment and Bolingbrook’s disinheritance before Richard’s tragic decline, deposition and death.

Tennant of course excels in the role of the King, who begins the play with an immature aloofness as he makes grand decisions without apparent thought, backed up by a self-interested inner-circle of advisers. What finally draws us in to sympathise with Tennant’s Richard is his tragic fall into the second half; yet before this he seems arrogant, whimsical and lacking credible or just motivation for denying the banished Bolingbroke his inheritance to fund a war with Ireland. The success of Tennant’s portrayal is that despite this we can ultimately become close to him, particularly when he starts to use humour as a coping mechanism for the threat of Bolingbroke and in his speeches in the second half. Though not usually soliloquies, he often addresses these to us, looking out at the audience, and sometimes purposefully turning his back on the new King. Leaving his back turned to the other characters onstage is an action Tennant uses throughout the play as a symbol of his pride, but in the second half it becomes an act of defiance toward the usurping king, provoking our sympathy at his undoing. This comes to its climax as he gives over the crown to Bolingbroke, flinging it out in his hand and at first triumphantly refusing to face his usurper.

Richard’s fall is made manifest in this production with a clever bit of set: a midair walkway across the proscenium arch, which works well to elevate Tennant on his grand throne, until he is finally cast down to a dungeon prison beneath the stage. The rattling produced on the metal bridge as actors walk across it is a minor irritant, but no matter. Doran gives Richard a final heroic flourish as he fights off the assassins in prison, only to be literally stabbed in the back by Aumerle (Oliver Rix), his cousin with whom Richard has a truly close relationship. At one point, while facing ruin at Flint Castle, Doran has the pair kiss and Richard playfully goes to put the crown on Aumerle’s head. The backstabbing betrayal of friendship rung in the audience almost as resonantly as the beautiful live voices that lifted through the scenes.

Indeed the choral, religious music of the three sopranos alternating with the blaring trumpets of regal fanfares suggests the tensions prevalent in this play. Doran presets the production beautifully, with the set of silver stranded bead curtains lit with projections to create the columns of a church, and a coffin draped in black centre stage, as the Duke of Gloucester’s wife mourns her husband’s death. This emphasis on the mourning court, all in dark period costumes, and the black humour of Richard’s speedy change of subject to the issues of state emphasises his youthful irresponsibility. His insistence on majesty and divine appointment is not only encapsulated in those regal anthems, but in his beautiful blue and gold dress-robe and long, Christ-like hair.

Despite its stars, the RSC is a company and the veterans of the stage put in some of the greatest performances in Richard II. Particularly funny was Oliver Ford Davies as Richard’s Uncle, the Duke of York, charming in his grumpiness. When his wife (Marty Cruickshank) and son (Oliver Rix) were praying for the new king’s forgiveness, and he praying against them, the image onstage was framed as three supplicants; his movements comically mirrored the gestures of his wife as she uttered her emphatic prayers to the King.

This was a play characterised by mirrors, not least in the vanity of Tennant’s Richard who peered at himself in the mirror in the first half, in a court where appearances are everything and flattery is a means to fulfil ambitions where the King promotes his favourites. This vanity was painfully repeated in the second half, after he had been forced to abdicate, and instead of reading out a list of treasons he looked at his face in the mirror instead for sin. By using the mirror in the first half we felt the true weight of his fall.

Posing existential thoughts to his subjects, Richard declares, ‘mock me not.’ There will be none to mock this reverend production.

Richard II moves from the Royal Shakespeare Theatre to the Barbican in December, where there are limited day tickets available. The production is also being broadcast live in cinemas on 13 November 2013.

“Very old words, with a very new face”: Shakespeare’s Globe as an arts destination for students