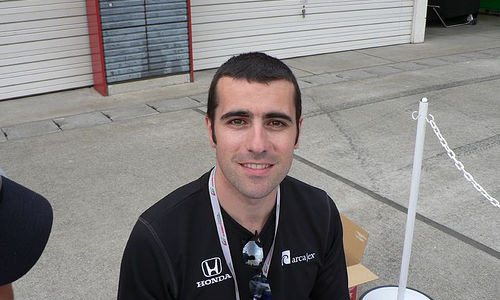 Dario Franchitti has been forced to retire from racing, but can reflect on a brilliant career. photo: nakashi

Dario Franchitti is a name unlikely to be familiar to all but the most hardened British motor racing enthusiast, but within the sport his influence and success has been unparalleled, as he has forged a career as one of the leading drivers in American motorsport over the past decade.

However, after sustaining back and head injuries in a crash at the Houston street circuit towards the end of what had been a frustrating IndyCar season, the 40-year-old Scotsman has been forced to retire from racing.

He walks away as the most successful driver in his field, safely established as one of the greatest British racing drivers of all time.

After progressing through the karting ranks in the 1980s, he rose to prominence in the junior formulae in the early 1990s. He won the prestigious McLaren Autosport BRDC Award for young drivers in 1992, later notably won by Jenson Button, Anthony Davidson and his cousin Paul di Resta. The prize was a test drive with the McLaren F1 team, which would take place in 1995.

After finishing fourth in his debut year in British Formula Three, he was signed up by Mercedes to drive in the International Touring Car Championship. He was an immediate revelation despite his inexperience in driving the high-powered cars, in contrast to the numerous experienced drivers he was competing against, including former F1 drivers.

However, at the end of 1996, the series collapsed due to spiralling costs, and Mercedes opted to place Franchitti in CART, the American single-seater series formerly known as IndyCar, which was at the peak of its popularity.

After a difficult first year at Hogan Racing, he joined Team Green, who had won the championship with Jacques Villeneuve in 1995. Immediately he became one of the front-runners, winning three races, taking five pole positions, and finishing third overall.

The following year, he mounted a challenge for the championship, and finished the season level on points with Chip Ganassi Racing’s Juan Pablo Montoya, but Montoya’s seven wins to Franchitti’s three gave the Colombian the title.

Montoya would later head to Formula One with Williams, and for a period afterwards Franchitti was similarly linked to a move back to the Eurocentric series. His former mentor Sir Jackie Stewart arranged for him to test for Jaguar in 2000, but little came of it and he would remain in the US for the rest of his career.

His American fortunes also began to slide. The dominance of Team Penske restricted Franchitti to just one win over the next two years. 2002 saw him finish fourth overall with three wins, including victory in a rare British race for the series at Rockingham Motor Spedway.

However, by this point, CART was in decline, with the top teams switching to the rival IRL IndyCar Series, which featured the Indianapolis 500. In 2003, Team Green switched to IndyCar, becoming Andretti Green Racing as former driver Michael Andretti bought part of the team.

The switch brought no change of luck for Franchitti, who was sidelined for much of 2003 after a motorcycle crash. With only one or two wins every year after that, and team mates Tony Kanaan and Dan Wheldon winning consecutive championships, it looked as if his one big chance of success had passed in 1999.

This all changed in 2007. Franchitti hadn’t won a race since the end of 2005, but at the Indy 500, he negotiated the carnage and found himself in the lead when a heavy rain shower hit the circuit, ending the race prematurely and handing him his first victory in the prestigious event.

Two further wins in mid-season gave him control of the championship, and despite two crashes which saw him end up upside down, he went into the final round battling for the title with team mate Kanaan and Ganassi’s Scott Dixon.

The race at Chicagoland Speedway ended with a late duel between Dixon and Franchitti, with the New Zealander dramatically running out of fuel with just two corners to go, giving Franchitti the championship.

After this, Franchitti announced his intention to move to NASCAR with Ganassi, joining his former rival Montoya, who had left F1 a year before. But his year-long foray into stock car racing was a major disappointment, with poor results, financial issues for the team and an ankle injury sustained in a heavy accident at Talladega.

The one highlight of the year was victory in the 24 Hours of Daytona with Ganassi, which would prove to be his greatest success in sports car racing.

He soon returned to IndyCar, this time with Ganassi, and was immediately successful again, winning in only his second race back at Long Beach. With four further wins, he clinched a remarkable championship victory ahead of Dixon.

Despite achieving so much, he never got the opportunity to race in F1. Having successfully competed alongside numerous former or future F1 drivers, there is no doubt he had the talent to at least be competitive

A second Indy 500 win, where he led a British one-two with Wheldon just behind, would prove the catalyst for another title charge in 2010, edging out Australian Will Power of Penske. His rivalry with Power continued in 2011, and Franchitti emerged on top once again, albeit in tragic circumstances, with the final race in Las Vegas abandoned after Wheldon’s death in the early laps.

The following year saw IndyCar transition to a brand new standard car, named the DW12 in Wheldon’s honour, and Ganassi Racing struggled to get to grips with it. Franchitti only won one race in the car: the 2012 Indy 500, his third success in the great race, and the third British win in a row after Wheldon’s victory in 2011.

But the overall championship saw Franchitti slip to seventh, followed by finishing tenth this year, his first winless season since 2006.

The violent accident in Houston initially saw him ruled out of the season’s final race, but the injuries are now considered to be career-ending. It is a great shame that his career ends on a low note, but safety and health is paramount. Crashes claimed his close friend Greg Moore in 1999 and Wheldon two years ago, and it is testament to the advances in safety that he escaped from his latest crash with just these injuries.

At 40, it is likely his best days were behind him anyway, but no driver likes to have the decision to finish taken out of their hands. He was due to stay on with Ganassi in 2014, once again competing with Montoya, who will return to single-seaters after his stint in NASCAR. It is likely that he will remain with the team in an advisory role.

Franchitti leaves an incredible legacy in American racing. Not only can he count an impressive 31 wins and 34 pole positions in 260 starts, but he has also been enormously influential in boosting the standing of British drivers in the US.

While not the first Brit to be successful Stateside – Nigel Mansell was IndyCar champion back in 1993 – he and Wheldon spearheaded a revival of British fortunes in IndyCar. Their combined five championships and five Indy 500s wins have opened the door for more British drivers forced into exile by a lack of opportunities in Europe to forge a career in the US.

Despite achieving so much, he never got the opportunity to race in F1. Having successfully competed alongside numerous former or future F1 drivers, there is no doubt he had the talent to at least be competitive. But his move to the US ultimately left him isolated; only Jaguar showed an interest after this point, and they instead chose to hire Brazilian Luciano Burti, who lasted just four races with the team in 2001.

Nonetheless, in 2012, he said he had no regrets about this; in an era dominated by Michael Schumacher, he probably achieved far more in the US than he could have in a midfield team in F1. Instead, he ends his career recognised as one of the best in his field, and will no doubt be present at races for years to come.