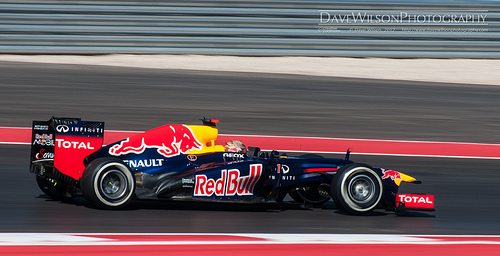 Sebastian Vettel has proven he is the master of consistency, but can he produce exceptional drives? photo: DaveWilsonPhotography

Vettel consistent but not yet great

The biggest individual prize of American college football is the Heisman Trophy, awarded to the best player during the season. The winner is determined mainly via the quality and consistency of his performances, but there is also another factor: the winner must have, in his resume, the ‘Heisman play’. This is a moment of extraordinary brilliance that leaves onlookers aghast and gets people talking about the player as a Heisman contender.

What has this got to do with F1? Not much, at least directly, but I want to make the argument that Sebastian Vettel is yet to have his own ‘Heisman drive’ in his career. Despite his success, he is yet to achieve an extraordinary feat during a race that many of his predecessors have.

With Vettel almost certainly heading for his fourth consecutive world title, discussion has inevitably turned to his standing amongst the all-time greats. After all, only Juan Manuel Fangio and Michael Schumacher have achieved this. Such consistent dominance was unheard of in the modern era until Schumacher helped turn Ferrari into an all-conquering juggernaut in the early 2000s.

Vettel has done much the same at Red Bull, but the odds have been very much stacked in his favour for some time. The Austrian franchise discovered him at an early age, backed him through the junior formulae and guided him into F1, where after some impressive early performances for BMW Sauber and Toro Rosso, they handed him a seat at the senior Red Bull team alongside Mark Webber in 2009. It just so happened that this was the year F1’s aero rules were radically overhauled, which played into the hands of Red Bull and their chief designer Adrian Newey.

Back in the 1990s, Newey was regarded as the best in the business, with Williams dominating with cars he designed – Nigel Mansell, Alain Prost, Damon Hill and Jacques Villeneuve all won F1 titles as a result.

The key difference between this quartet and Vettel is that the first three all moved on from Williams after their title wins, while Newey left Williams for McLaren in 1997; Villeneuve’s title defence dissipated as a result. McLaren’s Mika Hakkinen then won consecutive championships in Newey-designed cars, before the Schumacher-led Ferrari quickly eroded their advantage and became the dominant force.

Until Vettel came along, no driver had ever stuck with a dominant Newey-based team long enough to win consecutive titles. Mansell and Prost were past their peak at Williams and retired after winning, while Hill and Villeneuve were average drivers behind the wheel of exceptional cars.

The competitive advantage Red Bull has demonstrated over the last few seasons is very similar to Williams’ during this period, which makes it very difficult to determine how good Vettel actually is. Only Fernando Alonso has been able to consistently compete, as only Schumacher could consistently compete with the Williams drivers.

Having a brilliant car does make winning races far easier. Vettel’s qualifying speed has always been evident, but having a fast car that has predictable handling makes it far easier to drive up to the limit and beat everyone else with. While long-time team mate Webber is also fast, he is a lot less consistent and struggles on some of the more modern circuits – Vettel’s driving style clearly suits the wider tracks and manageable curves of Sakhir, Yeongam and the Buddh Circuit in Delhi, where he is likely to clinch the title at the end of October.

Back in 2010, Webber nearly beat Vettel over the course of the season, before a late surge by the young German took him to his first title. In future years, this will no doubt be painted as a classic come-from-behind narrative, but beneath the surface, there were subtle alterations to the car over the course of the season, particularly around the exhaust-blown diffuser.

If Vettel retired at the end of the season, what legacy would he leave? What could we point at and say ‘yes, that guy was brilliant’?

In its initial form, it suited Webber’s driving style much more, but gradually, as changes were made, it came to suit Vettel, which allowed him to go on the late-season surge. It is often said that Red Bull may be biased towards Vettel in some of their decisions, but having a car built around Vettel’s driving style is hardly ever cited as one of these and yet may be the most crucial factor of all.

The great drivers in F1 history have all spent a certain amount of time out of their comfort zone and have proven their worth in those situations. The ‘Heisman drive’ for each of the greats is usually one of these. Fangio’s, for instance, was his final win at the 1957 German Grand Prix, where he repeatedly broke the lap record at the infamous Nurburgring Nordschliefe circuit to catch and pass Ferrari’s Mike Hawthorn and Peter Collins in an age where drivers were one mistake away from death.

Ayrton Senna’s came at the 1993 European Grand Prix at Donington Park, where he dragged a mediocre McLaren past several cars on the first lap in treacherous conditions and dominated the remainder. Schumacher’s was a similarly dominant win in torrential rain in the 1996 Spanish Grand Prix at the Catalunya circuit while driving a poor Ferrari. Mansell famously overhauled team mate Nelson Piquet at the 1987 British Grand Prix. Alonso’s incredible wins at Sepang and Valencia in 2012 sealed his reputation as one of the sport’s greatest ever drivers.

In contrast, Vettel has nothing close to this, for he has spent the majority of his career driving the fastest car. Only two of his 35 wins have come after starting outside the front row, and both of those were from third on the grid.

Even when it appears he has achieved something against the odds, a scratch beneath the surface reveals it is not that simple. His first win at the 2008 Italian Grand Prix while driving a Toro Rosso was a very good drive, but what is often overlooked is how well the Newey-designed car handled the wet conditions at Monza – three of the top four cars on the grid for that race were part of the Red Bull family, suggesting he likely had the fastest car on the day.

Similarly, his first win for Red Bull in China the following year was while driving a car clearly suited to the conditions.

The closest drive you could argue Vettel has made to a truly defining feat of brilliance was at the Abu Dhabi Grand Prix last year, where he made his way through the field from last to finish 3rd. But even this has a context: he was once again driving the fastest car, and ended up running an advantageous pit strategy. It was a very good drive but everything fell in his favour on the day.

The inevitable comparisons will be made with Schumacher, but the difference is Michael had spent nearly a decade in F1 making his name before his spell of dominance. He had already chalked up a huge list of feats before he won four titles in a row, which merely added to his already-impressive legacy.

If Vettel retired at the end of the season, what legacy would he leave? What could we point at and say ‘yes, that guy was brilliant’? A list of wins from the front and a couple of impressive drives early in his career, yes, but not much else.

This is why the discussion of him as an all-time great is premature. While he is clearly a very talented driver, greatness is not just a measurement of the most wins and titles – it’s an almost intangible sense that someone is creating history and will leave a legacy that will be remembered forever.

Vettel is still young and will likely race on in F1 for many years to come, so he has plenty of opportunity to create this. But if he stays at Red Bull and keeps winning races from the front, he proves nothing, because he has already done this. To become established as a true great of the sport, he has to leave his comfort zone as Schumacher did in 1996, when he left Benetton for Ferrari.

If he doesn’t, he will forever be remembered as a driver who only won in cars designed by the greatest designer in F1 history.