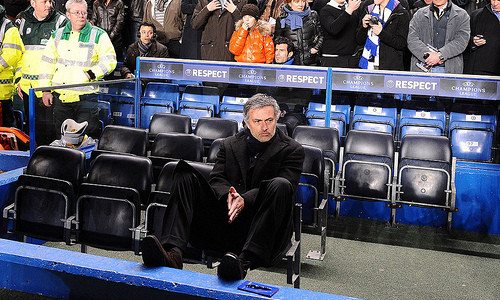 Jose Mourinho may have struggled throughout his return to Chelsea, but his talent is unquestioned. photo: In Mou We Trust

Defiant Mourinho is still the Special One

Having endured a tumultuous few years at Real Madrid, Jose Mourinho returned to Chelsea this summer – and for many, the second coming of the ‘Special One’ meant that the London club were undoubted title favourites.

His spell at the club between 2004 and 2007 oversaw Chelsea’s best haul of trophies in the Roman Abramovich era, and the rapport Mourinho shared with the supporters and players at the club has since been difficult to replicate.

So why is the man who brought Chelsea five trophies in three years feeling the pressure a mere three months into his second tenure?

The Blues’ stuttering start has been the worst opening to a season for 10 years, and the recent 2-1 defeat at home to FC Basel was their first home group stage defeat in the same time period.

The answer lies deeper than merely a poor start to the campaign; it is the manner of these defeats that is worrying. It seems bizarre that a star-studded team and a wonderfully decorated manager could produce such lacklustre performances.

An obvious answer is that the squad Jose has inherited second time around is not a Mourinho-style squad.

In previous successful spells Mourinho has had one or two lieutenants, players such as John Terry or Frank Lampard at Stamford Bridge, Esteban Cambiasso at Inter Milan, and Xabi Alonso at Real Madrid, who would play 50 or 60 games per season and consistently perform to a high standard.

The Chelsea duo are now far too old to play that many games at the highest level and so Jose is struggling to find a similarly reliable and steadfast performer whom he can rely upon.

While the likes of new acquisitions Willian, Andre Schurrle and Christian Atsu are hugely talented. The money spent this transfer window only serves to mask Chelsea’s big failing: signing a striker.
These creative players join Chelsea’s overflowing rank of attacking midfielders, notably the trio of Oscar, Mata and Hazard.

The Blues have simply added more to what they already had in abundance, and now they have a surplus of these flair players, while lacking key squad members in other positions.

Chelsea are also suffering dearly from an absence of width and penetration from the flanks. Hazard and Schurrle relentlessly cut inside from their wings, narrowing the play, and even the most imaginative players find it hard to create chances when space is at a premium.

Mourinho’s teams are famed for aggressively grinding the opposition down and not being afraid to ‘get the job done’, a task that these flair players are simply not made for. Mourinho likened his young squad to eggs needing to be nurtured. ‘Nurtured eggs’ don’t grind anything down, they get beaten at home by Basel.

To make matters worse, despite the Portuguese’s dilemma over which attacking midfielders to choose from his eclectic selection, the end result is that Chelsea have only scored six goals in their opening five games, a meagre return considering the wealth of creativity the Blues possess.

Therein lies Jose’s real headache. Who is his first choice striker? Is it Samuel Eto’o, who has put in three uninspiring performances and looks off the pace in the Premier League? Or is it Fernando Torres, a man who has notched only one league goal in 2013?

This is Jose Mourinho we are talking about. If there is anyone to best lead an unbalanced group of players to success it is surely he

Or does he now look to Demba Ba, the former Newcastle United strikerwho has found the net just twice since joining in the New Year?

These figures highlight just how crazy it was for Chelsea to allow Romelu Lukaku to join Everton on a season-long loan. It was Lukaku who inspired Everton to a 3-2 win at West Ham last weekend, his raw pace and strength shifting the momentum of the game.

He marked his debut with a memorable second half performance in which he scored the winner: rising bravely to head in Mirallas’ cross, only to be knocked unconscious in the process.

This epitomised what Mourinho longs for and what Chelsea lack: a gutsy and committed performer, willing to physically hurt himself in pursuit of glory. It is still unclear whether Lukaku will evolve into Chelsea’s next Didier Drogba – a lazy comparison that plenty of fans have been eager to make – but he has all the attributes to do so.

Mourinho’s natural caution has perhaps let him down here. Unprepared to take a risk on the young, exuberant Lukaku, he has instead brought in the ageing Eto’o who he knows and trusts.
But this is Jose Mourinho we are talking about. If there is anyone to best lead an unbalanced group of players to success it is surely he.

Two bad results do not make a crisis, and after the home win over Fulham (the last Premier League game at the time of writing), Chelsea now find themselves in fourth place, only two points behind Arsenal and Tottenham who have supposedly got off to great starts. It has been a faltering start, yes, but by no means a disastrous one. Mourinho has suffered withering criticism over his decision to sideline Juan Mata, but the decision not to play Chelsea’s player of the year for the last two seasons is typical of Jose.

The former Valencia midfielder is a fans’ favourite, and while many armchair followers of ‘highlights’ cite him as Chelsea’s best player in terms of goals and assists, Mourinho is seeing a bigger picture. As has been the case throughout his managerial career, he does not go by other people’s reckoning. What he is seeing, and saying, is that in Oscar and Hazard he has players who track back more, win back possession and are better in the air.

It is not a question of lack of talent, but rather in this current incarnation, other players are better suited to Mourinho’s style than Mata. But when he does return, and return he will, it will be to play how he has been told to, not how he’d prefer to. He will then become an even better player than he already clearly is.

That said, if Mourinho’s career to date has shown us anything it’s that intrigue and politics are never far away from his Machiavellian thought processes. The self-proclaimed ‘Happy One’ still has many problems to digest at the Bridge, but who are we to question a man who has won the league title with every team he has managed?

His achievements have been exceptional and his decorated CV compares with any other in world football.  Success breeds success, and once his team starts gelling, Mourinho will sleep a lot easier at night, not least because his counterpart David Moyes is having a torrid time trying to fill the sizeable void left from Ferguson’s retirement.

My view on this is a very simple one: good luck with that one, David.  You’ll certainly need it!