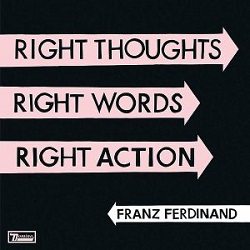 There was a time in the last decade when Franz Ferdinand were proclaimed would-be champions of the British guitar music scene that saw the likes of The Libertines and Razorlight rise to prominence. Hindsight paints a different picture, however. The Glaswegian rockers have crashed along with their jarring style long after those bands faded from our airwaves, and the title seems less expedient than ever upon the release of Right Thoughts, Right Words, Right Action. The rejuvenated group’s fourth album was subject to a relatively quiet release this August, but the band best remembered for 2004’s ‘Take Me Out’ are anything but reticent on this latest demonstration of their unique talents.

Clocking in at a meagre 35 minutes, they don’t waste time in reminding us of their spiky rock credentials. Album opener and lead single ‘Right Action’ drags us back into their heyday amongst a backdrop of clattering riffs and guttural yelps, tied together by the kind of mischievous melodies previously heard on ‘Do You Want To’ and ‘Ulysses’. Elsewhere, the strutting hooks of ‘Bullet’ and ‘Evil Eye’ add moments of throwback dance-floor cool to the mix, with any momentary sojourns into disorder marshalled superbly by the energetic but assured rhythm section.

If Franz Ferdinand have any qualms about their place in a shifting music industry, it certainly doesn’t show. Hot Chip’s production role can also take some credit here; their own ‘Over and Over’ comes to mind as ‘Love Illumination’ siphons harmony and discomfort in equal measure from the depths of its droning vocal layers. There’s a raw weight to this sound that resonates in today’s setting; a veritable sledgehammer next to the dentist’s drill of modern indie.

Franz Ferdinand’s sound is a veritable sledgehammer next to the dentist’s drill of modern indie.

The sideshow is tempered by an effortless unease, though, like a cool older brother attempting to shrug off suggestions of insecurity. Lyrically, Alex Kapranos has donned his wordsmith hat once again, with the result yielding a mixture between the cerebral and the bizarre as he sings “I’m the king of the animals” over a playful keyboard backing on ‘Treason! Animals’. ‘Fresh Strawberries’ sounds just as goofy to begin with, before it unveils a bittersweet crescendo of “wouldn’t it be easy with something to believe in.”

Happily, there is space for reflection aboard the madcap joyride, and Kapranos’ voice retains a casual charm over the frenzied backing as he steers a rough course through themes of faith and self-destruction. “How can I tell you I was wrong, when I am the proudest man ever born?”, he reflects coolly on the wistful ‘Stand On the Horizon’,  offering a momentary glimpse of vulnerability past the hip exterior his band wears so well. Behind the rhythmic brawn, this is Franz Ferdinand at their confident best, once again showing that few bands are as accomplished when it comes to suffusing the angsty with the debonair.

There were fears among some that Franz Ferdinand would mellow after the decline of the British guitar music scene. The reality has been quite the opposite; if anything, they have thrived as musical oddities, returning to their chaotic best on this latest showing. Unburdened by the expectations of a genre, there’s a likeability about the way the band deftly weave their way through their disco-infused, punk-tinged rock. They sound like a band having a properly good time – and boy, is it fun to listen to.

Similar to: The Fratellis, The Strokes