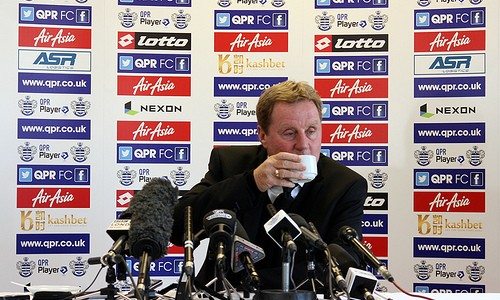 Can QPR manager Harry Redknapp guide the Hoops back into the Premier League at the first attempt? photo: thesportreview

Football League 2013-14? Anything could happen

It has been an unusually low-key build-up to the Championship this year, with few big money moves or shock managerial appointments.

Instead, careful building has been the main focus, perhaps aiming to follow the example set by promoted survivors Southampton, Swansea and Norwich rather than relegated big-spenders QPR.

However, much of the attention this year will be on the West London club, to see how Harry Redknapp’s band of international stars get on after failing in the Premier League last year.

The squad has obvious ability but after last year’s often lethargic, uninspired performances, it remains to be seen whether they can pull together to make an instant return to the top flight. But if you’re doing your predictions for the season, there are safer choices than QPR for the title.

Bolton Wanderers ended 2012-13 as the form team in the division under Dougie Freedman, after a disastrous start under Owen Coyle: Freedman has opted to stick with largely the same formula, adding depth in a bid to sustain a season-long challenge.

I would also look at Reading, who are in a good position to launch another challenge having kept largely the same squad as last year; although it wasn’t good enough to survive in the Premier League, it’s better than the squad that won the title two seasons ago.

People will also look to beaten play-off finalists Watford, who have secured the signings of yet more players from the Pozzo family’s clubs. Spectacular goal specialist Lewis McGugan has arrived from Nottingham Forest, but I doubt the former English champions will be too worried; they have also kept a stable squad under Billy Davies, who has helped calm the nerves on his return to the City Ground after a 2012-13 season that saw two managerial departures as their Arab owners found their feet in English football.

Other teams that will inevitably be mentioned in relation to title challenges will include perennial hopefuls Leicester, Brian McDermott’s Leeds (minus Ken Bates at last), and Ipswich, who finally seem to be heading upwards thanks to the guidance of Mick McCarthy.

Wigan will also be cited, but they have to negotiate the Europa League – expect a stronger second half of the season once they are out of that competition. But the beauty of the Championship is that there will be surprise packages, so don’t expect all of these teams to be competing for the old trophy.

At the bottom, things seem a little more clear cut. Yeovil Town were once non-league giants but are now a small fish in a big pond, and Gary Johnson will need to perform miracles to give them a second season at this level.

If you’re doing your predictions for the season, there are safer choices than QPR for the title

Above them, League One champions Doncaster look short on depth, while Millwall’s form in the second half of last season saw them plummet into the relegation battle. Perhaps it’s the year Barnsley’s luck finally runs out, or maybe Birmingham’s financial troubles will see them drop into the third tier for the first time in the 21st century.

As at the top of the table, there are plenty of worthy candidates, and there will also be one or two that no one could predict.

In League One, if you listen to the “experts”, Wolverhampton Wanderers only need to turn up to win the title. But it’s far from a sure thing – experienced campaigners from their time in the Premier League like Stephen Hunt and Karl Henry have moved on, while Kevin Doyle, Roger Johnson, Jamie O’Hara and Stephen Ward are likely to follow them out of Molineux. However, in Leigh Griffiths and Jake Cassidy they have two strikers who are capable of bagging plenty of goals this season.

The other two relegated clubs, Peterborough and Bristol City, are also expected to be in contention, along with Sheffield United, Simon Grayson’s Preston North End, and play-off finalists Brentford.

If the likely battle between these six and the inevitable surprise contenders, is half as exciting as that of last season, which went down to the final minute of the final match, it will be well worth keeping an eye on. Alternatively Wolves could blitz the whole league and make it very boring – but at this stage, who knows?

At the bottom, Coventry City’s struggles have been well-documented, but their squad isn’t in particularly bad shape at the moment. That said, if their financial troubles worsen, they could be facing a second relegation in three years.

Alongside them, take your pick from 17 clubs, including last year’s overachievers Walsall and Tranmere Rovers, promoted sides Gillingham, Rotherham United, Port Vale and Bradford City, and last year’s strugglers Colchester United, Shrewsbury Town, Oldham Athletic and Carlisle United. I can honestly say I have no idea who will be relegated.

League Two is similarly open this year, with few outstanding candidates for promotion. The name on everyone’s season previews at the moment is Portsmouth, finally out of the financial doldrums and into fan ownership. But despite the positive vibes around Fratton Park and the size of the club, their squad is still pretty thin and short on established League Two players – they will be relying on youngsters if they are to return to League One immediately.

Elsewhere, Fleetwood Town have once again sought to build their squad with big names in a bid to continue their rapid rise through the pyramid, but after last season’s disappointing mid-table finish, there’s no guarantee it will work. Cheltenham Town were unfortunate to miss out on promotion, but the play-off finalists have continued to add to their squad, although they have lost key midfielder Marlon Pack.

Fellow play-off teams from last season Burton Albion and Northampton are also amongst the favoured contenders, along with the division’s bigger clubs: Chesterfield, Oxford United and Bristol Rovers. If you want a wildcard, take a look at Rochdale, now back under the command of Keith Hill who guided them to promotion in 2010.

Some of the smallest clubs in the Football League are amongst those likely to be scrabbling to avoid the trapdoor into the Conference. Despite their size, though, Accrington Stanley (of milk advert fame) have appointed former England international James Beattie as manager, while another, Francis Jeffers, will likely start alongside former Manchester United trainee Danny Webber up front.

That said, they are still amongst the favourites for the drop, along with Dagenham & Redbridge, Morecambe, AFC Wimbledon and Newport County, who return to the Football League for the first time since 1988. It has been a long road back for the Welsh club, who were liquidated the year after their relegation and were forced to play in England for five years.

This leaves my club: Torquay United. Last season was by far and away the worst the club has faced since our return to the Football League in 2009. Manager Martin Ling went off sick, never to return, and we lurched into a downward spiral that nearly saw us relegated to the Conference for a second time. However, caretaker manager Alan Knill, who would be appointed as full-time boss at the end of the season, managed to squeeze a couple of crucial wins out of the side at the end and we survived.

If you want a wildcard, take a look at Rochdale, now back under the command of Keith Hill who guided them to promotion in 2010

Young wingers Jordan Chapell and Courtney Cameron and the promotion of more players from the Torquay academy make this quite a youthful squad, but not one without experience.

Compared to Ling’s possession football style, it won’t necessarily be the most attractive to watch, but if it keeps us in League Two for another season most of the fans will be grateful. I suspect we will be closer to the bottom rather than the top, but Knill has a good record at this level and has plenty of talent to work with in the current squad, so we might yet surprise a few people.