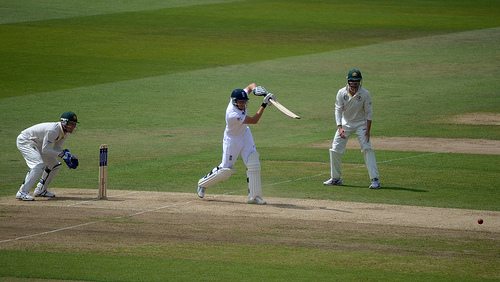 England have been criticised despite their 3-0 Ashes win over Australia. photo: nic_r

England cricketers must do better

The general consensus is that the Ashes series, whilst ultimately a comfortable 3-0 win for England (that should have been four-nil, but I’ll save that for another time), was a lot closer than it appears from a glance at the scoreline.

Australia got themselves into strong positions, could have won the first Test, probably would have won the third, and who knows what would have happened had there been no rain at the Oval which forced Michael Clarke into trying to force a result?

The theory goes that England won the series by seizing the moments, ranging from James Anderson’s brilliance at Trent Bridge or the demolition job at Durham. Some have looked to sweep criticism of England under the carpet by pointing to the scoreline, saying it is hard to criticise a team that wins 3-0.

I disagree with the latter view entirely. It was only last year that England were baffled by Pakistan spinner Saeed Ajmal and co, losing 3-0 in the United Arab Emirates, and could only draw 0-0 against an average New Zealand side. This is far from a perfect Test team, and calls for improvement are justified.

The fact of the matter is that England are a much stronger team than Australia, who are a team in transition. This series could have been so different, and that is a sobering thought when you consider that England possessed the world no.1 ranking as recently as 20 August 2012, a title they relinquished to South Africa.

This series could have been so different, and that is a sobering thought when you consider that England possessed the world no.1 ranking as recently as 20 August 2012

Australia did not under-perform during the series. Shane Watson was widely mocked for his propensity to get out lbw, as he did four times over the five matches, but he is hardly a gladiator of the Test arena. His swashbuckling 176 at the Oval was only his third hundred in the longest form of the game, and what was portrayed as a disastrous series was actually an average Shane Watson series.

Steve Smith over-performed, and although he may develop into a good Test batsman, there were hardly many singing his praises before this series; indeed, he wasn’t even part of the original squad. Chris Rogers began the series largely unproven at this level, and was too often allowed to get a start against the seamers when he clearly had a problem against Graeme Swann.

It was a similar story for the bowlers. Mitchell Starc, in particular, seemed to take wickets mainly through not knowing himself where he was going to pitch the ball. The English contingent’s taunts of ‘Mitchellllll’ at the Oval were telling: not out of adulation, but because he resembled his namesake Mitchell Johnson in his erratic nature. The Trent Bridge Test was only close because of Ashton Agar’s freak 98 and Phil Hughes’ only decent score of the series, which still should have had him play more Tests than the distinctly underwhelming Usman Khawaja.

Spinner Nathan Lyon should have been in the side from the start, but without Agar the first Test would have lacked its status as the best of the series. Peter Siddle, my favourite Australian cricketer, performed manfully as always, but noticeably waned as the series went on. Even Ryan Harris, their ‘gun bowler’, was an unknown quantity because of his fitness record; maybe he should have played from the start, but one of his greatest triumphs was stringing together four successive Test matches.

If England want to be number one, they have to be ruthless, and that ruthlessness must apply when they look at themselves in the mirror

Only two Australians really under-performed. James Pattinson is a much better bowler than he showed and will come again in the return series should he recover from his back injury, and captain Michael Clarke, whilst hardly disappointing, was nowhere near as imperious as his form over the past couple of years has suggested he would be.

So what does this mean? It suggests that a couple more of the Tests should have resembled what happened at Lord’s, where Australia were routed. Whereas the Aussies only had one real underperformer (Pattinson’s injury curtailing him to two appearances), England had several, especially in the batting department.

Ian Bell was of course magnificent, hitting a majestic three centuries and deservedly winning man of the series, but he had to dig England out of several holes due to top-order failures. Kevin Pietersen and Joe Root suffered from fitness issues and inexperience respectively, but Alastair Cook and Jonathan Trott were big disappointments, especially as they often found ways to get out rather than just falling victim to good deliveries. Matt Prior had a torrid series but he should also do better in Australia, being a batsman who prefers quicker pitches.

England often fell victim to plans that were hardly complicated. Cook was undone by consistent full-pitched bowling that deprived him of scoring options, and lacked the patience to ride through tough patches. Trott’s favourite shot through midwicket was cut off and he seemingly had little answer. Pietersen looked strokeless against Lyon at Durham. Other sides will have been watching.

England need to strive further if they want to be the best team in the world. They need to find a quality number six. They need to avoid selection howlers like Simon Kerrigan. Evidence has suggested under the Andy Flower regime that England can and probably will improve in these areas. They still have a number of world-class players, of which only 33-year-old Pietersen and 34-year-old Swann are reaching retirement age. I fully expect England to win comfortably in Australia, as Chris Tremlett is unleashed on the Australians and the pitches should offer more pace for both bowlers and batsmen, which should make for consistently exciting cricket.

A right balance has to be found in the analysis of this series. Yes, England won 3-0, and they did play well in parts. But they will know they can play better, and should have played better. If England want to be number one, they have to be ruthless, and that ruthlessness must apply when they look at themselves in the mirror.