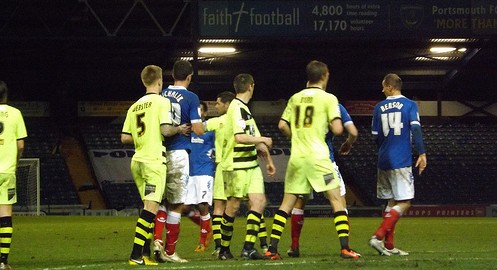 Can the unheralded Yeovil Town complete a shock promotion to the Championship? photo: stephoto27

Brentford vs Yeovil: battle of the unfancied

What a final few weeks it has been for Brentford. Famously thwarted by the width of the crossbar in their final-day promotion showdown against Doncaster Rovers, it has been a rocky road to redemption for Uwe Rosler’s men.

Marcelo Trotta’s 90th-minute missed penalty bounced off the woodwork, allowing Doncaster’s James Coppinger to race the other end to seal promotion for Brian Flynn’s side.

Demoted to the play-offs, it looked as though Brentford were set to throw away their opportunity once again in their thrilling semi-final encounter with Swindon Town.

After a 1-1 draw in the away leg, a brace from 24-goal Clayton Donaldson helped the Bees into a 3-1 half-time lead on home turf. However, goals from Joe Devera and Aden Flint gave Swindon an unexpected lifeline, and it needed some cool heads in the penalty shoot-out to see Brentford through.

Former Manchester City forward Rosler praised his players for “growing from boys into men”, but few would have thought that Yeovil Town would be the side aiming to slow this maturing process.

Gary Johnson’s side have exceeded all expectations, including their 2-1 aggregate triumph over comparative giants Sheffield United in the play-off semi-final.

Johnson, who suffered play-off heartache while in charge of Bristol City, has done a superb job in his second stint at Huish Park, but has urged his players “not to be tourists” at Wembley.

In reality, it is club scouts who will be doing the touring, in particular with a view to 23-year-old Paddy Madden. The striker has been capped at under-21 level by Republic of Ireland, and his 22 league goals this season will have Championship vultures circling.

Another name that fans are likely to recognise is that of James Hayter. The former Bournemouth striker has scored 16 goals this season, although he is better known for his quickfire hat-trick against Wrexham in 2004 – an accomplishment which took only two minutes and 20 seconds after he emerged as a substitute.

Brentford’s consistency and muscular style of football makes them favourites to prevail on the big stage. But their opponents from Somerset are not simply there as plucky underdogs, as assistant manager Terry Skiverton shows.

“We’re not just going there to make up the numbers,” said the former Yeovil player and manager. “People say you can go there and have a good day. Not if you get beat you can’t.”

Brentford have not been in the second tier for 21 years, while the closest Yeovil have come to the Championship is a 2-0 play-off final defeat to Blackpool in 2007.

But both sides’ giddy excitement at the prospect of reaching unchartered territory should mean an open game. Expect to see two clubs growing exponentially to deliver an engrossing spectacle.

League Cup runners-up Bradford City return to Wembley as favourites for their 64th and final game of the 2012-13 season, as the Bantams bid to return to the third tier for the first time since 2007. After several seasons of on-field torment and financial peril, things are finally looking up for a club that was playing Premier League football 12 years ago.

For the last two seasons they have flirted with relegation to the Conference, finishing 18th in both, but this year, under former Charlton manager Phil Parkinson, they have a squad that combines physicality with flair, and youth with experience.

Focus and pressure will in particular fall on Bermuda international Nakhi Wells, who has 25 goals in all competitions and starred in the first run to Wembley, to deliver on the big stage. The winger was also the hero in the second leg of the semi-final against Burton Albion, coming up with two crucial goals to help them win the match 3-1, and the tie 5-4.

Standing in their way is another former top flight club, Northampton Town. In recent years, the Cobblers have become established as more of a yo-yo club in the bottom two divisions of the Football League, though they were last relegated from League One in 2009.

Since then, like Bradford they have struggled to gain a footing in the division, finishing as low as 20th last year. But the arrival of former Watford and Coventry manager of Aidy Boothroyd during last season helped them not only avoid their first relegation to the Conference, but also build a squad capable of challenging for promotion back to League One.

After missing out on an automatic berth, Northampton were handed a tough tie against Cheltenham Town, who were the defeated play-off finalists last year. But two 1-0 wins in both legs, courtesy of goals from Roy O’Donovan and a wonder strike from Luke Guttridge, sealed their first trip to the national stadium since 1998.

While much focus will no doubt be on experienced defender and PFA chairman Clarke Carlisle, it is in attack that this team is strongest. Former MK Dons and Colchester United striker Clive Platt is struggling to shake off injury. though it is his much-travelled strike partner Adebayo Akinfenwa that is the one to watch; the big man has 35 goals over his last two seasons at Sixfields.

One fact to note is that Yorkshiremen have won their last nine shootouts, including an FA Cup first-round triumph over Northampton; so if this match goes the full 120 minutes without a resolution, you’d be foolish to bet against them from 12 yards.

But Northampton are a dangerous team, and there have been enough shocks in play-off finals to tell us that Bradford should not start planning trips to Molineux, Deepdale and Bramall Lane just yet.