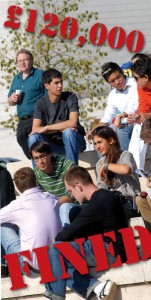 Warwick University fined students more than £120,000 for various offences including drugs and anti-social behaviour last year, the Boar can reveal.

The exact amount of money amassed in fines from the academic year of 2011-2012 was £123,058, according to a Freedom of Information (FOI) Request by the Boar.

This is an increase on the previous year from 2010-2011 where no drug offences were listed, and only £1,125 was incurred from fire alarm offences.

One third-year who does not wish to be named attributes the rise in drug related offences to the increasing availability of drugs on campus. He said: “I know of a couple of people last year who were kicked out of halls [because of drugs]. I can’t remember it happening when I was in my first year, though. I don’t think there is a huge drug community at university, but I feel it’s fairly easy to get hold of certain things…if you want to.”

Another student wishing to remain anonymous told the Boar that she had witnessed illegal activities relating to drug use on campus.

The first-year student said: “Someone I lived with was found in possession of cannabis when he sprayed the fire alarm with deodorant to test if it was a smoke or heat sensor. It set the alarm off and when they checked his room they found the drugs.

“Because he was found in possession of cannabis instead of actually smoking it, he was allowed to stay until the end of term (another three weeks or so) but wasn’t allowed to return to campus after Christmas.”

There have been 15 confirmed incidents in relation to the use of illegal drugs since September 1 2009, but a spokesperson for the University said that the fines for drug use had not increased much over 15 years.

However the £1,250 was attributable to only two offences, one of which saw a single student fined £1,000.

Students’ Union (SU) president Nick Swain said that these figures showed that there were very few instances of anti-sociable behaviour at the University.

“These figures clearly highlight just how few instances of anti-social behaviour there are at Warwick and the number is so small that it is impossible to say if there is a changing trend,” he said.

Another third-year student, who also wished to retain their anonymity, admitted to the Boar that a fine they received from the University was “probably fair”.

The 21 year-old student was fined £20 for anti-social behaviour relating to alcohol and he told the Boar:
“As much as I didn’t want to be fined and hoped it could be avoided, it was probably a fair amount.

“It is the sort of amount that persuades you not to do it again and keep clear of trouble, but it is a ridiculously high deterrent.”

The FOI revealed that students were also fined £118,088 in library fines. At Warwick, students are fined 20p per day if a standard loan is overdue.

Second-year Chloe Edwards thinks this is reasonable. She said: “I don’t think this is excessive, but charging students £1 per hour if they forget to return a short-loan is a bit much.”

Mr Swain added: “Arguably the most unfair charges come from library fines incurred because students feel that there is no other option when only a few books are available at any one time.

“Having said that, library fines are very transparent and the email notification system has greatly improved in recent years too.”

A spokesperson for the University pointed out that all money amassed from fines is reinvested in the upkeep of the library.