**How does it feel being back in the UK on tour?**

We’re thrilled to be back! It’s been too long! We have a lovely audience here and it’s exciting to be back in front of them!

**Any teasers of what we can expect from the new record, _Heartthrob_?**

I think the record is very strong. It has 10 tracks on it and all the songs are my new favourites every day! We wrote for nearly 2 years and put an enormous amount of time and energy into making Heartthrob. We wrote love songs for the first time every, but there are also lots of sad anthems as usual!

**Based on new single ‘Closer’ from the forthcoming album, you guys have taken a shift from previous efforts towards electropop. How did that emerge?**

I think our last few records have started to lean towards “indie pop” rather than “indie rock” and I think with Heartthrob we decided to ditch the “indie” and just go for it. Greg Kurstin who produced the majority of the record has worked with Lily Allen and P!nk but also with The Shins and Bird and The Bee and we really trusted him. Although it’s not a huge guitar record it still came from the same place our other records have. Sara and I write and demo extensively and
this was just the direction our demos went. I think we have a strong back catalogue of heavy guitar songs and we wanted to do something fresh.

**What influences were involved in the process of making the new album – both musically and in your own lives?**

I think we were just really interested in pop music the past 5 years. We were doing a lot of writing for pop artists and a lot of collaborating with dance artists and became really interested in that sort of production. I think we’ve grown up and want to sound grown up. I think after 17 years writing together we were ready to try something new. In order to keep growing we have to constantly evolve.

**Was the recording process different to your previous albums?**

We spent more time writing than we ever had. We also used 3 different producers. Which I think allowed time to reflect and organize how we wanted this record to sound and be received. Instead of playing everything ourselves we also relied on a cache of incredible musicians to take our ideas to the next level.

**If I recall, each of you live in separate locations with your respective partners. What were the logistics like in putting together the album, from the lyrics to the instrumentals?**

We do live in different cities. We have now for nearly 10 years so it’s become second nature to us. We send most of our music digitally and do all our collaborating long distance! When it
came time to actually record Sara joined me and Greg in La and lived there while we recorded!

**How does being a support act compare to being the headliner? Is it more stressful for you?**

Ha! It’s definitely stressful. Not MORE stressful. Different kind of stress. With a headline show you have to build a show and ensure it has an arc and you can keep people entertained for
an hour and a half. With a support set of 35 minutes you need to hit them with everything you have. I definitely prefer headlining but supporting is a great exercise in building
your self esteem. You have to have a thick skin.

**Do each of you have a preference – headline/support, big venue/small venue, etc? Why?**

I like headlining. But also see the importance of standing on stage in front of an audience that is not your own. I think big venues can be great if the sound is great. I like doing both, big
and little shows. I think it’s important to keep things fresh. We like to change things up a lot. The worst thing that can happen to a band is that they get bored and phone it in. I think
our band is good at constantly changing the environment so we don’t get bored or complacent.

**Being sisters, do you ever get on each others’ nerves in the studio and on tour?**

Of course! But I think I get equally annoyed at everyone I travel with over time. At least with Sara I can just ignore her if she’s bugging me. I think for sisters who have spent their whole
lives next to each other we get along pretty well! We’ve perfected it!

**What do you guys get up to on your downtime?**

We both like to read and write a lot.

**Do you have any particular songs you enjoy performing live? Which ones and why?**

Right now I’m really enjoying playing the new songs. They are more complicated and sonically are massive. So it’s a really big boost of energy when we play them! 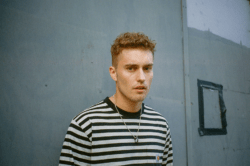 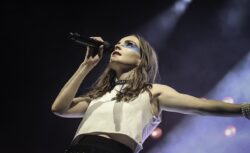 Screen Violence by CHVRCHES: a refreshingly candid and dark return