So the tennis season begins again and it seems to have started with a curious sense of déjà vu. The Australian Open has once again eluded ‘our Andy’ as he was, quite frankly, outplayed and outthought in the final. For the British, the Australian Open was pretty dull to be brutally honest with Elena Baltacha and Anne Keothavong showing us that women’s British tennis players are made of stern stuff, yet unfortunately lack the necessary skill to be truly successful.

Andy Murray did get to the final, but who had he played? His route to the final was not easy, not every match in a Grand Slam can be easy, but Murray would have expected to beat all his opponents en route to the final which he did comfortably, with the slight exception of a minor wobble against Ferrer. Murray played some fantastic tennis, yet we know he is a brilliant player who can still improve. Therefore his performance this January begs two questions; why did he lose? Also, can he ever win that elusive slam?

The answer to the first question is simple; Novak Djokovic. He has proved that he is not a ‘one slam wonder’ as many have accused him of being, but rather he is a serious contender this year to knock Federer, or even Nadal out of the top two. He thoroughly deserved his victory in Australia as anyone would who can beat Federer and then Murray in straight sets consecutively.

His dismantling of Federer’s game clearly showed those who were not blinded by British desperation and desire that he was a clear favourite and he did exactly the same to his old friend, who he used to train with as a youngster, in the final. We can say Murrays usual failings let him down, mainly his first serve percentage which was pretty dreadful, or his inability to adapt to a Grand Slam final, as seen in the US and previous Australian Open; however that would be unfair on Djokovic who was, quite simply, outstanding.

The second question is harder to gauge as Murray will have opportunities to win as he has reached three finals before and has many years ahead of him. However, judging from his performances in these finals there is clearly something wrong mentally. The obvious being the pressure we as a nation may put on him and the pressure he puts on himself, Murray needs to learn to enjoy the big stage and to relax in its atmosphere and occasion, as true champions do.

He may need to work on aspects of his game such as his serve and his tendency to overuse the drop shot yet when flying Murray is absolutely sublime and no-one can dispute that no matter whether you love him or hate him. ‘Our Andy’ needs to stop being ‘our Andy’ and play tennis for himself, maybe smile on occasion or look like he is enjoying the audiences adulation; then his game will come to the fore and I am fully prepared to say that if he wins one slam soon, more will come. However if he keeps falling away on the big stage, the slams could become even more elusive. 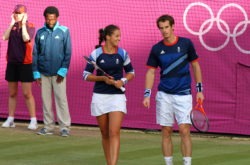