Remembering the violence, missing the point

The news reports keep saying the chant was “Nick Clegg, we know you, you are a Tory too”. The news reports are wrong. I never heard that chant – not inside the forecourt of 30 Millbank Tower, anyway. “Nick Clegg, suck my dick, you’re a fucking Tory prick” or the rather simpler “Tory scum” were the sounds reverberating off the walls as dozens of students forced their way inside Tory headquarters, past a pitiful line of 20 or so police officers, and caused hundreds of thousands of pounds’ worth of damage.

Though most of the protestors at Millbank were non-violent – indeed, many appeared to have wandered in just to have a look – a select few, maybe 100-200, were intent on causing as much destruction as possible. An even smaller number, around 50, were directing their anger not at the building but at the police, who had turned out in such miniscule numbers that they would have been overrun immediately had they attempted any sort of aggression towards the assembled students. The remainder of the crowd were in generally good spirits, despite the obvious anger on display – I was reminded more of a night at Evolve than a dangerous, violent riot. Some students near the front had even brought a stereo and were dancing to drum and bass.

The scenes inside the forecourt of 30 Millbank Tower were very different to the angry but altogether more polite protests that wound their way through central London last Wednesday. For the vast majority who attended, Aaron Porter’s rousing speech perfectly captured the mood, his mesmerising gravelly voice expressing the disappointment and bitterness felt by thousands. Many of the protestors, including myself, seemed to be disaffected Lib Dem supporters, betrayed by the only party they thought would stand up for them. The majority will only have heard about Millbank on the news – visiting Tory HQ was simply not on the agenda for around 90 percent of the students attending. Even for the majority of those present in the forecourt, the day was one of angry but non-violent protest.

But for a small minority, the brevity and relative tameness of the march left something to be desired that an after-party at LSE was just not going to satisfy, and it was this small minority that caused most of the injuries and damage. Their desire to do more than simply stand around in the street waving signs for a couple of hours is more than understandable when faced with the Government’s assault on the very principles underpinning our public education system – particularly when a prime target, Tory HQ, was available just hundreds of meters away. Reports are that many were 16 or 17 year old college students – the same people about to be facing £9,000 fees. If anyone has a right to demolish the Tories’ offices, it’s them.

That said, the level of anger and violence with which students faced Tory headquarters was both gratifying and disappointing in equal measure.

On a purely emotional level, it was immensely satisfying to be there to watch the headquarters of the Tory party being invaded. Faced with the stark reality that our protest – huge and powerful as it was – was highly unlikely to make one speck of difference to the Government’s policy, it was nice to at least see some damage being done to those responsible. With any luck, the Tories will face a steep insurance bill for the students’ damage to the building, just as future students will face a steep bill for the damage the Tories’ cuts will do to the education system. While damage to property is understandably illegal, damaging the future of the country is equally unjustifiable.

However, on an intellectual level, I am immensely disappointed that such scenes ever took place, for a variety of reasons.

Firstly, violence against other people is never justified. Injuring or even killing a police officer (as was entirely possible when throwing a metal canister off the 7th floor) in the process of protesting against cuts to higher education is indescribably horrific. The Met’s stated intention of charging that protestor, if found, with attempted murder is wholly justified. The Tories’ cuts, while horrifying in their own right, are no reason to commit such crimes. That said, in fairness to the crowd and to students I’ve spoken to, I’m sure that pretty much all of them would agree with this, as evidenced by angry chants of “stop throwing shit” after the fire extinguisher was lobbed off the roof. Smashing Tory HQ may be satisfying, but beating up police officers – who, incidentally, are just as likely as students to fall victim to Osborne’s axe – is disgusting.

Secondly, I agree with what thousands of other students are saying: that the violence detracts from the eminently sensible and reasoned message the protest was aiming to get across. It is an easy distraction from the very real hardships that we were trying to prevent. Cameron can now come out and denounce the violence and discuss the police response rather than responding to NUS president Aaron Porter’s calls for a reaffirmation of the value of state-financed education. It also ruins our public image as students. The image the people of Britain will take away from 10 November is not one of legitimately angry protestors and logical, impassioned speeches, but rather one of a (probably drunk) yob attempting to kill the riot police with a fire extinguisher. As for the argument that without the violence, we would not have been on the news, I would rather have less media attention than bad media attention. Negative press can only harm our cause, and we desperately need to succeed.

Despite the satisfaction that may be gained from physical intervention against an oppressor, I wholeheartedly wish the event had been peaceful – if for no other reason than that the media coverage has made the spokesperson for our generation a criminal attempting to take out police officers rather than Aaron Porter and the 50,000 who took to the streets to protest this Government’s outrageous assault on the future of British education. 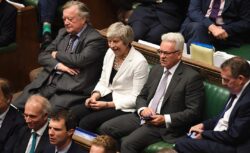