Few people get the chance to play a sport for their county. Fewer still represent their university in a second sport. How many then go on to represent their country at the Paralympics in a third sport, win gold, and break the world record? Just one actually- he went to Warwick University and he’s called Tom Aggar.

As a teenager, Aggar played water polo for Hertfordshire and rugby in the Saracens youth development squad, and he later played rugby for Warwick’s 1st XV as a second-row forward. In 2005, whilst still at Warwick, Aggar’s promising rugby career was cut short when he lost the use of his legs in an accident, and a couple of years later he took up rowing: “Having spent three months in a spinal unit, I was hungry to get back to some sort of fitness. I crossed paths with a guy called Robin Gibbons who was pioneering a new type of rowing machine for people who had suffered a spinal injury and couldn’t use their legs to exercise.” Using this FES, or functional electronic stimulator, to artificially contract his leg muscles, Aggar won his category at the 2006 Indoor Rowing Championships, breaking the world record. “At the time, lots of people were like, ‘why do you want to do that, your legs are paralysed’, but I couldn’t think of any reason not to do it and I loved it. Using the machine, my leg muscles came back to some form- even to the point where I embarrassed my brother by having bigger quads than him… as you can imagine, he wasn’t impressed.”

For Aggar, it was about more than just keeping fit or embarrassing his brother: “At the time I thought ‘this is the best thing to keep me in shape’, and if one day there was a breakthrough in stem cell therapy I would be giving myself the best chance of walking again by having strong legs and good fitness. It was then I got the bug most rowers talk about.” Aggar quickly made the transition to rowing on the water after meeting the British Paralympic rowing coach at the 2006 Indoor Rowing Championships. His first ever major race was the 2007 World Championships in Munich. No pressure there, then. Having taken up rowing just months earlier, Aggar beat the reigning two-time world champion, set a new world record and took gold. Not bad for a water polo-playing rugby player. “The World Championship final in 2007 was my most memorable race. At the time an Australian athlete, Dominic Moneypenny, was dominating the event and I had my sights set on taking his title off him. All I can remember is in the last hundred meters being closed down, hanging on for dear life and not really knowing whether I crossed the line first or not until looking up at the results board. Being top of that medal podium was a pretty special feeling.”

It is a special feeling Aggar has since got to know better than most; he started the 2008 season by breaking his own world record, and later that year won Paralympic gold in Beijing (breaking his own world record yet again). He won every race at the start of the 2009 season, and in his last race of that year won by over 15 seconds- at the risk of stating the obvious, that’s a very, very long time. And yes, that was a new world record as well. He was the first, and to date only, adaptive rower to achieve a sub-five minute time and in recognition of his achievements he this year became the International Rowing Federation’s first ‘Adaptive Rower of the Year’. He makes Usain Bolt look like a fun runner. It’s all too easy to forget the circumstances in which Aggar took up rowing, and that he nearly wasn’t a rower at all.

I ask Aggar about the challenges in switching from playing one sport, as an able-bodied athlete, to a completely different sport as a disabled athlete: “I think the most challenging thing was using just my upper body in a sport where conventionally most of the power comes from your legs. I was always pretty strong naturally but it took some time to train my upper body for endurance exercise. I mean, when you’re using your legs you can always dig that bit deeper and find that bit extra, but when your arms have blown you’re in trouble.” What about the switch from a team to an individual sport? “I do miss the team side of rugby, having to look out for your teammates and work well together, but for my category in rowing there is only the single as an option for competition.”

Having achieved so much so soon after taking up the sport, there surely isn’t much room for improvement: “I think being an athlete you’re always motivated by challenges. I remember looking at the winner of the Worlds in 2006 and thinking ‘I am never going to break five minutes 30’, but it became a challenge, the next being to go sub-4:50. I think with the right conditions it’s possible.” It’s hard not to draw parallels between the speed at which Aggar is continuing to lower the disabled, or ‘adaptive’, rowing world record and middle-distance running in the 1950’s, when Roger Bannister first ran a mile in under four minutes. It isn’t all about breaking his own world record: “We have the World Championships this year out in New Zealand in November which will follow on to qualification in 2011, and obviously the big one in 2012. Having a chance to compete at a home games in a sport that you’re passionate about is every athletes dream, so for now 2012 is definitely the dream.”

Aggar, of course, isn’t the only disabled British rower hoping to achieve success in London in 2012. He tells me about the other, perhaps less well-known, British athletes he will be competing alongside at the World Rowing Championships in New Zealand: “Two teammates I would mention competing in the coxed four event are visually impaired athlete James Roe from Stratford upon Avon and fellow Warwick University graduate Ryan Chamberlain, who in April 2008 lost his lower right leg in a mountain biking accident.”

Having rowed at Warwick myself, I am interested in how our training schedule compares to the national squad’s regime. When I talk to Aggar he is in Banyoles, the venue for the rowing at the 1992 Barcelona Olympics, on a ten day training camp- but when he tells me about their training, it does seem rather like his life is one long training camp. “We train all year round, six days a week, two to three sessions per day on the water, on the ergo [rowing machine] or in the gym lifting weights.” Not quite the same as our training at Warwick, then. One thing is the same though: “The odd song before a race helps to get you fired up, something like D12’s Fight Music or Eminem’s Lose Yourself.”

I ask Aggar what his biggest challenges have been, expecting him to talk about the accident five years ago that eventually led to rowing. But the competitiveness that has taken him so far in three different sports shows through when he says: “The biggest challenge for me, having trained full time for a few seasons, is keeping injury free. The first year or so I always pushed myself pretty hard in training but paid for it by picking up injuries. I’ve learned a lot since, and it’s important to listen to your body when you’re training every day- knowing when to push hard and when to say enough is enough.” I get the impression Aggar won’t say “enough is enough” for many years; he is, after all, still relatively new to rowing and won’t yet have reached his peak. Less obvious is when, or even if, an athlete capable of really challenging Aggar will emerge; for now, it seems, Aggar will continue to dominate in a sport he so nearly didn’t discover.

In between breaking world records and adding to his collection of gold medals, Aggar is an ambassador for a charity called Wooden Spoon: “They’re a great charity committed to making a real difference to disadvantaged children and young people in the UK using the values and ethos of the game of rugby.” For more information visit www.woodenspoon.com.

If you’re interested in rowing at Warwick, visit www.uwbc.org.uk or email president@uwbc.org.uk. 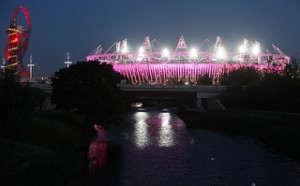 Olympic Stadium: the end of an era?