The age old English custom of seeking someone to blame

Now that the dust has settled, and the ephemeral feelings of English patriotism and false optimism have subsided, I feel it adequate to assess this summer’s most premier sporting event and indeed the first of its kind, “Africa’s World Cup.” There are contradictory sentiments as to successes on the pitch, however off it, events proceeded impeccably. What will be remembered? The Vuvuzela? Perhaps the Jabulani? Surely Africa’s tears in Gyan’s penalty miss? Or most memorably from an English point of view, the goal that never was. With the Football League and Premiership season underway, fans have returned to their partisan support of local clubs and all sentiments of ‘football coming home’ have well and truly died. Indeed, there is an age old English custom of seeking someone to blame, and no doubt following Mauricio Espinoza’s inexplicable error, England fans launched scathing attacks on the linesman. More alarming, however, was the sight of Fabio Capello joining those fans and blaming English exit on the Uruguayan. It is here that I must express a belief which I feel must be shared by all concerning the performance of the England national football team – they simply are not good enough.

Players such as Lampard, Gerrard and Barry must no longer be lauded as ‘World Class.’ Such a label should only be reserved for the true greats of the modern game and those who have consistently produced at the highest level, or more poignantly, when it matters. Up against a dynamic and exuberant German side without the inspirational Michael Ballack, Bastian Schweinsteiger excelled in a deeper, more central role along with the emerging Sami Khedira and classy Mesut Oezil. In the group stages, Jamie Carragher was exposed for a lack of pace by Jozy Alitodre and Upson’s performance alongside John Terry against Germany was no better as the defence left enough holes ‘to park a bus.’ Similarly, Gareth Barry was made to look sluggish by Oezil, Lampard was out of ideas and Rooney looked out of sorts. The performance by the England side was laughable and quite frankly against Germany they were, for lack of a better word, violated. The only players to come out with any credit were Ashley Cole, whose performances were solid, Gerrard, who did show some endeavour and surprisingly Heskey who I feel, although ineffectual, played to the best of his ability.

Such a humiliation was inevitable and it was a case of ‘when’ rather than ‘if’ a defeat would occur. Indeed, the warning sides were there, and all was not well as John Terry spoke out of turn and Wayne Rooney complained of boredom in the camp. It seems Capello, famed for ruling with an iron fist, in an attempt to distance himself from the lack of discipline that successive England sides under Eriksson and McLaren experienced, has overstepped the mark. In addition, he has demonstrated a tactical inflexibility, child-like obstinance, and obtuse manner that is baffling for a man that has won a league title with every club that he has managed in his career. Further still, the manager demonstrates an aloofness from his squad that was made apparent when Brown and Robinson publicly retired to Capello’s chagrin.

The question that comes to mind is what now for England? A rebuilding is indeed necessary and Capello has shown signs of change following the inclusion of Jack Wilshere in his first England squad. However, for reasons unexplained, Capello has withdrawn the Arsenal youngster from his next squad in a move which renders his initial gesture as a token. Perhaps more worryingly, when asked why snubbing the promising Jack Rodwell, who enjoyed a successful season in the first team for Everton last year, Capello looked bemused and responded to the journalist, by asking who? (Seemingly unaware of the Everton starlet) Although many have jumped on the bandwagon and indicted England for a lack of talent I do believe the talent is there. Players such as Adam Johnson, Phil Jones, Richards, Wilshere, Gibbs, Rodwell, Sturridge, Jordan Henderson, Delfouneso and even Andy Carroll, although not necessarily ready, have ability and the future is indeed bright. It is just a question of giving them the opportunities and bringing them through.

I cannot complete this article without expressing my great sadness at the news that the career was over for England’s most capped outfield player. One of English football’s oldest adages proclaims that ‘if you’re good enough you’re old enough.’ Reversing this, does there ever come a point when you are considered too old? You know the man in question by many names. Golden Balls, Mr Posh Spice, Captain Fantastic – it indeed is David Beckham. Beneath the glitz and glamour is just a ‘good old east end lad’ who I believe still has the ability to compete at the highest level. Which other Englishman, can produce a cross field pass with an effortless ease that defies belief? Which other Englishman can drop the ball on a sixpence from the by-line? Beckham has a timeless class that is still apparent and has been ever since he lobbed Neil Sullivan from the halfway line all those years ago. The continued success of Scholes and Giggs at Utd makes it apparent that class never leaves you, and although Beckham has stated he will never retire from international football it seems that under Capello, we face a future without Beckham.

Although this article, has seemed a damning denunciation of Capello, that was never its intention. Football is undoubtedly a results based industry, and prior to his most recent international tenure, Capello was a man famed for getting results. When those results do not come, fans can hopefully take solace in good performances, however those performances have not been apparent. Capello’s contract runs out in 2012 and the FA have announced that the new man to take the poisoned chalice will be an Englishman. In the mean time, Capello has two years and a European football Championship to turn this all around. Will he able to do this? Will his successor be able to do any better? Only time will tell. 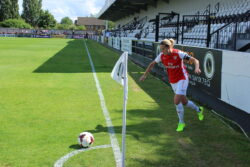 Kelly Smith is one of few footballing legends, a true pioneer